Mike Smith, the executive director of the Security Council’s Counterterrorism Committee Executive Directorate, is to be reappointed to a six-month term through June as a search for his successor begins, he confirmed with PassBlue.

Smith would not say whether he wanted to extend his term for a longer period, but he noted that he intended to return to Australia, his home country, to attend to “personal and professional projects” in the international arena. Smith is originally from Adelaide, but he will be returning to Sydney to live. The committee’s press officer said that the United Nations secretary-general’s office would make an announcement about a successor, but Smith said that no one, to his knowledge, has been identified as a likely candidate so far.

Smith, 63, came to the post in 2007 with experience as his country’s ambassador for counterterrorism as well as ambassador to the UN in Geneva and to the Conference on Disarmament from 2002-2006. He has also been ambassador to Algeria, Egypt, Sudan and Tunisia. Smith has been popular with the Security Council – no small burden. He had replaced Javier Rupérez, a former ambassador of Spain to Washington, D.C., who is said to have ruffled feathers.

The executive directorate is part of a vast UN hydra; that is, the 31 organizations that form the Counterterrorism Implementation Task Force, set up in 2005 to deal with the issue across the UN system. The Security Council committee that Smith helps run is the primary subsidiary organ in that body countering terrorism, tasked mainly with monitoring, outreach and field visits.

“It’s a big job,” said Peter Romaniuk, the assistant director of the Ralph Bunche Institute for International Studies at CUNY (of which PassBlue is a project) and a counterterrorism expert. Smith’s job required “deft diplomatic skills,” and he “reached out to as many as he could” in his work in the council and the rest of the UN, “minimizing politics and maximizing substance” and getting consensus to improve the “multilateral impact on counterterrorism.”

The Counterterrorism Committee, which consists of all Security Council members, was established in 2001, after the Sept. 11 terrorist attacks in the United States, to supervise the carrying out of UN Resolutions 1373 (2001) and 1624 (2005). Both were created to improve a country’s ability to criminalize terrorist activities on its own turf, including the financing of terrorism, and to prosecute perpetrators and their supporters. Some of the committee’s measures to eliminate terrorism include asset freezes, sharing of information among other governments on terror groups or activities and extradition cooperation. The 2005 resolution strengthened the earlier resolution and others, focusing more closely on prohibiting illegal incitement to terrorism, preventing such conduct and denying safe haven to terrorists.

The executive directorate was created in 2004 as an acknowledgment that the committee needed to better coordinate its work. Smith is finishing up his tenure under Morocco’s ambassador, Mohammed Loulichki, whose country is a nonpermanent member of the Security Council and current chairman of the working group.

With the spread of terrorist organizations worldwide and active threats across the globe, like the siege of international hostages in Algeria recently, the activities of the executive directorate will remain prominent at the Security Council. On Jan. 15, the council held a high-level debate on the subject, presided by Hina Rabbani Khar, the foreign minister of Pakistan, which holds the rotating seat of the presidency this month.

In her speech, Rabbani, whose resemblance and poise brings to mind Benazir Bhutto, the Pakistani assassinated politician, said that “in the past decade, one lesson we have all learnt is that a lopsided or unidimensional approach will not work as we try to defeat this hydra-headed monster of terrorism. This monster also has tentacles all around the world. This is truly a global threat. Our strategies and responses must also be global.”

Smith himself has stressed the importance of a social dimension to combating terrorism. “Counterterrorism programmes that ignore the human rights dimension are less effective and can even be counterproductive,” he said in an interview with the UN News Center. “Naturally, issues such as education, humanitarian support and good governance are important for their own sake, but they are also relevant to our work and should be taken into account in broader, more comprehensive and integrated strategies to address terrorism.”

Smith added in an e-mail to PassBlue that the director position has been a “fantastic experience” and that he agreed with the UN secretary-general, Ban Ki-moon, that “people in leadership positions such as this should move on after 5 years and allow someone with a new vision to take over.”

Alice Volkov has a master’s degree from the Graduate School of International Affairs at Australian National University in Canberra. She wrote her thesis on the Responsibility to Protect doctrine and the intervention in Libya in 2011. Recently, she was an intern with the South Asian Human Rights Documentation Center in New Delhi. Her areas of interest also include strategies for preventing mass atrocity crimes; international development practices relating to the governance sector; and criminal justice reform. Volkov received a bachelor’s degree, with honors, in history from the University of Melbourne.

As Iran Allows the UN Access to Suspected Nuclear Sites, Its Uranium Stockpile Is Growing 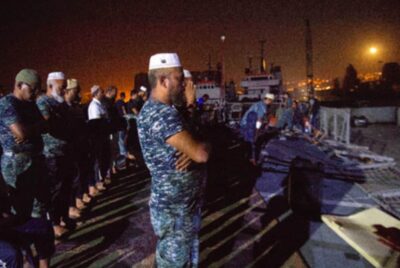 Lebanon’s Crisis on Top of a Crisis: Our Latest Podcast Episode