A legal defense fund has been set up for John Ashe, a former president of the United Nations General Assembly, who has been accused by the United States government in a million-dollar tax fraud case. The fund is to help Ashe and his wife, Anilla Cherian, to fight a “complicated and unprecedented tax-related criminal case in the United States” requiring “enormous financial resources,” according to a letter sent by a friend of the couple to other parties.

An additional letter, written by Ashe and Cherian and addressed to friends and colleagues, reinforces the plea to donate to the legal defense fund. PassBlue recently obtained copies of the letters.

Ashe, a former diplomat from the Caribbean island nation of Antigua and Barbuda, pleaded not guilty in October 2015 to criminal charges of filing fraudulent income tax returns and evading tax payments to the US government on more than $1.3 million he is accused of receiving in bribes dating to 2011, which the US has traced.

The charges by the US were made on Oct. 6, 2015, amid a broad bribery scandal involving a billionaire Chinese developer and cohorts who allegedly aimed to buy influence through Ashe and his office at the UN to build an international conference center for the world body in Macau, among other deals. Cherian has not been charged with any crime.

Preet Bharara, the US attorney in New York, said when the charges were filed that if proven, they would confirm that “the cancer of corruption that plagues too many local and state governments infects the United Nations as well.”

From 2013 to 2014, Ashe was president of the UN General Assembly, mainly a ceremonial position filled by member states that is not part of the UN Secretariat, which is led by Secretary-General Ban Ki-moon.

Ashe is reported to have used the bribery money to indulge in shopping sprees, buying Rolexes watches and bespoke suits as well as building a private basketball court in his home in Dobbs Ferry, N.Y., and traveling first class on vacations with his family.

The letter from the couple’s friend, dated Feb. 1, 2016, and asking for donations to the legal defense fund, was written by H. Elizabeth Thompson. It was sent in an email in February by the law firm Sills, Cummis and Gross in Newark, N.J., to friends of “John and Anilla.” (The firm is representing Ashe in his criminal case.)

The letters from Thompson and Ashe and Cherian were accompanied by bank wiring instructions to the legal defense fund at JP Morgan Chase and a donor acknowledgment form to the defense fund trust (which said that donations do not qualify for the federal annual gift tax exclusion).

The letter from Ashe and Cherian, dated Jan. 18, 2016, begins: “Dear Friend/Colleague: We are writing to make an urgent and personal appeal for your support in the extraordinarily difficult legal battle that our family now faces.

“As you may have seen/heard in a variety of media sources, John, as President of the United Nations General Assembly by universal acclamation for the period 2013-14, is the highest ranking diplomat from the UN to have ever been indicted. Under U.S. law, the indictment is based on allegations presented by the U.S. Attorney without any opportunity for the person charged to respond to, and/or rebut the allegations before those charges are made public.

“To present John’s side of the allegations, and to defend his reputation and character will require substantial financial resources. What makes this legal battle particularly arduous is that almost all of our family assets are either frozen by an agreed-upon court order, or tied up as security for John’s bail bond. The need to defend against these allegations therefore poses an unprecedented challenge for our family.”

The letter, signed by Ashe and Cherian, also said that though they could not comment on specifics of the case, they “are eternally grateful for the love and support we have received from our friends, especially those in Dobbs Ferry, NY, where our family has been involved in a wide variety of community events during the last eight (8) years.”

The couple said they had no immediately family in the US and were grateful to five friends who enabled Ashe to financially “complete the bail process,” which required a $1 million bond. Ashe is under house arrest with electronic monitoring.

The couple noted that the “legal ordeal” came on the heels of “several painful medical challenges” experienced by the family, including Cherian having to “undergo her fourth surgery” — no details provided.

The letter from Thompson, the couple’s friend, said, in part, “Sadly, John and Anilla are involved in legal proceedings in the United States that have upended their lives and placed them under tremendous personal and financial pressure.”

Ashe was the ambassador of Antigua and Barbuda when he was elected to the presidency of the General Assembly for the yearlong term. The post is gained through horse-trading among UN regional blocs and voted on by all 193 countries annually.

In the bribery case, Ashe was charged by the US with five others, including another UN diplomat: Francis Lorenzo, who was deputy permanent representative of the Dominican Republic and an American citizen. On March 16, 2016, he pleaded guilty to six criminal charges, including bribery, tax fraud and money laundering, after a US judge had recently denied Lorenzo’s bid for diplomatic immunity in the case against him. The US complaint against Lorenzo said he was a go-between for Ashe and Ng Lap Seng, the billionaire Chinese developer charged in leading the scheme.

Ashe has permanent US residency and should have lost his diplomatic immunity when he was no longer an ambassador or was the Assembly president, since a new government of Antigua and Barbuda denounced and disowned him as its envoy in New York. His lawyer, however, contended Ashe has immunity. The US has not made a decision on the matter but prosecutors have hinted that he might also be charged with bribery and money laundering. (As an aside, the most-borrowed book at the UN’s Dag Hammarskjold Library in 2015 focused on immunity of heads of state and state officials for international crimes.)

The others accused in the bribery scheme are Ng, a citizen of China, the Dominican Republic and Portugal; Jeff Yin, Ng’s assistant; and Sheri Yan, who led the Global Sustainability Foundation, a shell organization that apparently funneled some of the bribes. They were all charged in paying more than $1.3 million in bribes to Ashe in exchange for not only official action as General Assembly president but also as an official of Antigua and Barbuda to promote Chinese business interests there and in Kenya. Ng and Yin have pleaded not guilty, but Yan has pleaded guilty to one count of bribery.

A fourth person who was indicted, Heidi Hong Piao, or Heidi Park, was the finance director of the Global Sustainability Foundation. She pleaded guilty in January to five criminal counts, including bribery and money laundering, and agreed to cooperate with authorities regarding the role she played in the bribery deals. She could potentially provide more information to prosecutors.

In court, Piao said Ashe received payments to attend a conference in his official UN capacity.

The Ashe scandal widened on March 18, 2016, when a China-born executive, Julia Vivi Wang, was charged by US prosecutors with bribery to gain diplomatic posts in the Antiguan government for her husband, unnamed in the complaint, and another man, “facilitated” by Ashe.

[This article has been updated] 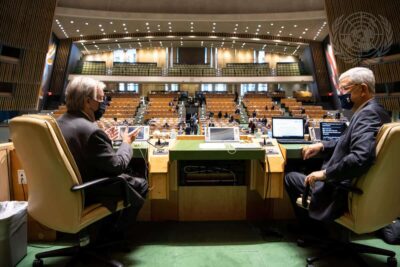 The UN General Assembly President Turns His Focus on Women, but Why?

Three Ways to Help Prevent Violence Against Women and Girls