Le Specialita: A Touch of Rome on 42nd Street

Cipriani is an international restaurant and catering firm whose holdings range from Harry’s Bar in Venice to Yotto, a Japanese eatery in Abu Dhabi. The business may be best known in the UN neighborhood for its 42nd Street party palace, an ornate, cavernous space housed in a converted old-fashioned bank building that is rented out for special events.


Just east of the palace, sharing the same street address, is a slice of Rome, an intimate restaurant where you are as likely to hear people speaking Italian as you are English.

Cipriani Le Specialita is a few steps down from the Midtown Manhattan sidewalk. But going inside instantly takes you back to that friendly but somewhat chaotic Roman hole in the wall where you once grabbed an espresso and cornetto at the start of the day and returned at midday for a nice three-course lunch.

While the decor is on the stylish side, Le Specialita is casual and comfortable. Its biggest drawback is that it is packed for several hours each day, starting at noon, yet has few seats. That, of course, is also proof that a goodly number of Midtown office workers consider it worth the wait, even standing at a tall table to eat.

While carry-out is generally the rule in this part of town, the atmosphere here is enticing enough that you’ll want to eat on the spot. The main draw is the daily lunch specials, which give you a choice of main course, pasta, side dish and drink, bottled water or a soda, for $13.50. Admittedly, this is not Per Se, but it’s really not too bad for the money.

Once you’ve entered the bright room, with its mustard-yellow walls and dark green trim, it’s not clear how you’re supposed to order. But one way is to treat the glass-fronted counters that run along two of the four walls as a cafeteria line, where you can check out what’s on offer and tell the kitchen staff what you want. Then you head for a table and a gracious waiter brings your dishes to you a moment later with a warm comment. The waiter comes back 10 minutes later to make sure that everything is to your liking and returns once more with your bill.

On recent visits, the main-course choices have included a sizable chunk of sautéed mahi mahi, a (slightly dry) breaded fried-chicken cutlet with an arugula and tomato side salad and a generous plate of tender, thinly sliced rare flank steak.

Pasta choices have included ravioli stuffed with ricotta and topped with bits of black truffle, farfalla flecked with shredded roast tuna and capers and an orzo salad with slivers of mushroom and vegetables. A lovely plate of cubed and roasted zucchini with rosemary was my favorite side dish.

If you don’t want all that food, there’s a salad bar, a soup of the day and a wide choice of Italian-accented sandwiches (prosciutto, mozzarella, sopressa and such on crusty longish rolls for $8 to $10). If you want even more food, check out the desserts: perhaps a pear and custard tart ($6, with a perfectly respectable crust), parked alongside an espresso; the regular coffee is blah.


The available floor space is small, with only five tables, each seating two to three people, though four or more often try to squeeze in. But at least the upholstered seats are comfortable. Four more spots on stools are available along a raised counter-top; and four high tables are situated near the hot-food section, where you park your plate and eat while standing. When the weather warms up, you’ll be able to sit at sidewalk tables.

The noise level is conversation-friendly and, mercifully, this is one of a few New York eateries without canned music. There’s a hardy band of regulars, and you will be charmed as they chatter away in Italian while you nibble at your roasted zucchini. 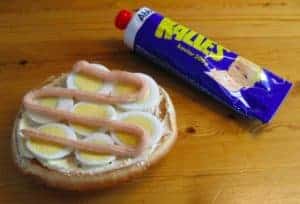 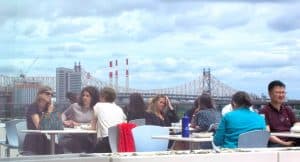 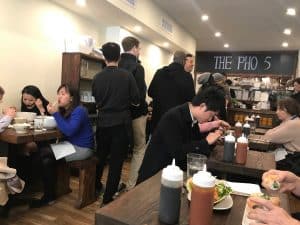 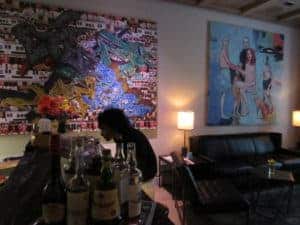 Art and Lunch, a Felicitous Blend at Rose Hill