Set discreetly within the 17-acre compound of the United Nations on the East River, about 1,550 roses grow and bloom year after year. The UN roses, flowers with imaginative names, are donated by All America Rose Selections, a nonprofit group dedicated to the cause of “exceptional roses.”

They consist of hybrid teas, floribundas, grandifloras and landscape shrub roses in every conceivable shade of pink, yellow, orange and red as well as stalwart whites. The names evoke eras, if not a touch of mysticism or silly humor: Betty Boop, Marti Gras (yes, misspelled), Julia Child, Daydream, Carefree Wonder, Dick Clark, Strike It Rich, Easy Does It and About Face.

The Peace rose from 1946 is still a blossom among the madding crowd; while Love, from 1980, grows within sight of Secret, 1984. The UN’s peace bell pagoda, a gift from Japan in 1954, before the country was an official member of the world body, was moved to the garden in 2009. Traditionally, it is rung twice a year: on the vernal equinox and in September to coincide with the opening of the annual General Assembly session, accompanied by a release of white doves. The bell, all 993 pounds of bronze and other metals, is housed in a 13-foot-high cypress pavilion resembling a Shinto shrine; the base is quarried marble donated by Israel, from the hills of Jerusalem.

Occasionally, a human intrudes into the garden. “I was passing through,” said Camilla Chebet, an intern from Nairobi, Kenya, who came out recently from her office in the UN to check out the river promenade and “reflect,” discovering the garden in early August. “It’s beautiful. I was pleasantly surprised. I wondered who manages it, why here, who came up with it, why these types of roses, where are they from?”

Chebet, who works for the Department of Economic and Social Affairs, was right to ask such basic questions. The answers are hard to come by at the UN, as it does not seem to have a prepared history of the garden. A UN librarian (from Botswana) came up empty, so he asked a UN tour guide (from Kenya), who offered a smattering of facts from a notebook. Perhaps it’s time for a General Assembly resolution to be passed promoting the rights of the roses and their reason for being at the UN.

A visit to the UN archives reveals that the idea for a garden was “backed by a number of leading women at the United Nations,” says an internal memo, responding to a flurry of letters written in late 1949 and early 1950 from Upper East Side matrons to Secretary-General Trygve Lie (from Norway). The women included Mrs. Philip C. Jessup, Mrs. M.C. Nigel and Mrs. Mahmoud Bey Fawzi, whose husband was the Egyptian ambassador to the UN at the time. (Philip Jessup was an American diplomat.)

The garden was planted sometime during the UN’s construction phase, from 1948 to 1952, stocked entirely from the start with donations from the All America Rose Selections, said Andrew Nye, a Briton who is chief of Facilities Management Service at the UN. Although the UN has 193 members, the roses come from only the All America corps, which donates up to four new prize winners every April, replacing ones that failed over the winter.

In June, the garden, about 100 feet long by 75 feet wide, is probably at its most lush, although once the torrid heat of a New York summer does its thing, the flowers can find a second life in the fall. Nye, who oversees the maintenance of the garden, says the hardiest varieties are the floribundas and the shrubs. On a wet afternoon in August, the shrub roses, a robust pink and a bit proud, like a nation built on an industrial-military complex, outflanked the rest, while the grandifloras, as Nye attested, withered in the weather.

How did they all fare in the July heat wave? “Like all of us, with difficulty,” Nye said. The flowers incurred “some damage but nothing unexpected.”

Each rose is labeled with a name and most often, a year. The roses may receive much more tender loving care than some nations do at the UN, looked after daily and constantly pruned to ensure blooming by a full-time garden shop led by John Grassi, an American, and complemented by a contractor.

The amount of water the flowers receive is closely watched, too, the way a model peacekeeping unit should function. The raised beds are mulched to save water and to flush out weeds. In the fall, the bases of the roses are covered to help them last through the winter, and they are regularly checked for insect and disease infestation so they can thrive. “We have an irrigation system that waters them out of necessity,” Nye said.

Besides the flowers, the garden attracts smokers, who huddle in a designated spot fringing the plot. Otherwise, it’s a genuinely silent place on the UN map, attracting few visitors. The roses share space with London planes, oaks, honey locusts and flowering cherry trees. Espalier fruit trees of pears and apples climb low trellises along the temporary covered walkway next to the garden.

The roses are fertilized with an organic compound, and no, they are not dowsed with recycled water, Nye said, adding “we have a harvesting plan not active yet.”

The garden is no longer part of a visitors’ center tour nor is the public allowed to stroll through without a UN escort, but it can be possibly espied from boats cruising the river or by helicopter, should that opportunity open up. Google Earth captures the garden’s honeycomb pattern yet no closeups.

And no roses are allowed to be picked, “at least not without approval” Nye said, a process that could take a lifetime but conceivably leaves the garden corrupt-free.

1 thought on “A UN Garden, Sweet With Fair Roses”

China and Russia Win Human Rights Council Seats, but the Saudis Get Rejected

As the Nobel Peace Prize Is Awarded to the World Food Program, Famines Loom 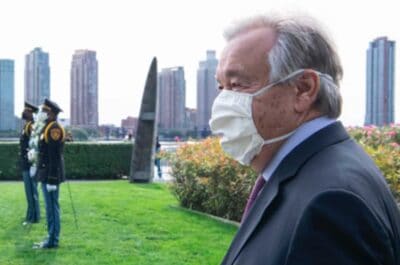 The UN’s 75th Birthday Is Here; Trump’s Not Coming to UNGA; What He Might Say Virtually