Music in the Midst of Violence: A Story From Palestine

This past summer, while working for a Palestinian music organization in the West Bank, I had a front-row view of the unfolding political events in the region. As the artistic and academic coordinator of Al Kamandjati, a nonprofit group that makes music accessible to people in Palestine and Lebanon, I was living in Ramallah, the de-facto administrative capital of the Palestinian West Bank, approximately 12 miles from Jerusalem. While coordinating logistics for a summer music festival, I observed how rapidly circumstances changed in the West Bank and in Gaza.

Al Kamandjati offers music education classes that range from Western classical and Arab music instrument lessons to general music classes to United Nations Relief and Works Agency (Unrwa) schools. It also hosts concerts in various parts of Palestine and Lebanon throughout the year, but most prominently during its two annual music festivals.

This year’s Music Days Festival, which was held in June, welcomed 25 international musicians from nine countries in Europe, North America, Central America and Asia as well as more than 40 local musicians, all together producing nearly 50 diverse concerts, ranging from electronic music and hip-hop/funk to traditional Arab songs and Western classical ensembles. I was in charge of the artistic side of the festival, communicating with musicians and institutions locally and abroad to recruit participants and to design programming.

In addition, being a violinist, I participated in one of the workshops while working as the acting orchestra manager, once the festival started. Needless to say, a huge amount of work and preparation went into the festival organizationally and musically.

Unfortunately, the festival started three days before the Israeli military began Operation Brother’s Keeper, in response to three Israeli youths being kidnapped from the Gush Etzion settlement in the West Bank on June 12. The military operation resulted in nearly 70 airstrikes on Hamas targets in Gaza and more than 2,000 raids on houses, universities and offices, as well as 400 to 700 arrests and numerous deaths across the West Bank, according to such sources as Ma’an News in Palestine and Ynet News in Israel.

The operation caused a strong reaction from Hamas, which responded by firing a fresh round of rockets from Gaza into Israel. The Israeli government then began Operation Protective Edge on July 8, in response to Hamas’s continuous rocket fire, resulting in concentrated airstrikes and a ground invasion in Gaza, too.

Looking back at those few weeks in June and July, I have reconstructed a diary showing how practicing and performing music together became extremely challenging for the musicians as the conflict escalated.

Al Kamandjati began its two-week Music Days Festival yesterday. Although the staff members and I had been working on the festival for months, external factors had begun to affect the schedule. First, we had to cancel concerts and workshops in Gaza at the last minute because of problems with entry permits. Traveling to Gaza is often severely restricted, and the permit request for the visiting international musicians, some from as far away as Finland and the United States, was denied. The atmosphere was not really festive, either: just two days before the festival got underway, most merchants across the West Bank closed their shops to support a hunger strike by Palestinian prisoners, who had been protesting administrative detentions (indefinite detention without trial) by the Israeli government. To keep the festival going despite the public mood, Al Kamandjati’s administrative staff members decided to dedicate all concerts to the prisoners participating in the strike and to tell the audience about it before each performance.

The orchestra workshop, which was part of the festival, commenced. The annual workshop included four days of intensive rehearsals in Ramallah for both international and local professional musicians and students, followed by concerts in different cities, such as Jenin and Nablus in the West Bank and in Jerusalem. This year’s orchestra repertoire was Mozart’s Oboe Concerto and Beethoven’s Symphony No. 5, along with Andante Meditativo for String Orchestra by a Palestinian composer, Salvador Arnita. Israel was still searching for the young Israeli settlers who went missing on June 12. A few Palestinian students canceled their participation in the last few days because of travel difficulties from increased security at checkpoints on the roads south of Ramallah.

Our orchestra schedule was to feature concerts in Jenin, Haifa, Ramallah and Jerusalem from today through June 22. We planned the concerts, but we were not certain if we could perform in Haifa and Jerusalem. Most Palestinians were allowed to go to Israel and East Jerusalem only with special permits, which were often difficult to obtain. We finally received permission for our Palestinian musicians the day before going to Haifa, though we were notified two hours later that all permits were revoked. The Palestinian musicians, especially students, had been excited to go to Haifa, because they had never visited the city before. It was hard for me to see them so disappointed. The concert in Haifa could not go on.

Yet, our first concert of the Ramallah Orchestra was successful in Jenin, attracting more than 200 audience members. On the way back to Ramallah, we decided to take a longer route home. We heard that some Israeli settlers were throwing stones at Palestinian vehicles traveling near a Jewish settlement (the vehicles’ license plates give them away), and we did not want to take our chances. The next day, I felt relieved that we got out of Jenin just in time; I found out that Israeli forces raided Arab American University, which was not far from where we held the concert in Jenin, only hours after we left the city.

“It finally happened — Israeli forces raided Ramallah last night,” my roommate said when she saw me in the morning. The overnight raid in downtown Ramallah was met with angry protestors. Sure enough, there were already photos and video clips of what happened the night before on social media. Although Israeli forces had been raiding at night and arresting hundreds of people around the West Bank since the settlers went missing, I naïvely held on to the fact that Israeli forces had not entered Ramallah since the second intifada, and so I believed Ramallah would be safe from raids. The first thought that came to my mind when I looked at the photos was that my family (who were in the US and in South Korea) should not see these, otherwise they will worry about me.

This was the day when we were supposed to go to Jerusalem for the last concert of the Ramallah Orchestra. Even though we had had to cancel our concert in Haifa, we heard that the checkpoints might be accepting permits again. I was busy checking the last-minute details in my office when a Palestinian participant knocked on my door. “Shinhee, I think you should know that M [another orchestra member]’s best friend got killed last night. He’s been crying really hard on the stairs.” What could I say to a man who just lost his best friend? When I saw M, I could not do anything but pat his shoulder. I had heard earlier that someone had been shot and bled to death on a rooftop during the clash with Israeli forces in downtown Ramallah. I did not know that the victim would turn out to be dear to someone I knew.

Still, we attempted to travel to Jerusalem, carrying all the orchestra members in a bus later in the day. In the end, only three musicians from the Palestinian contingent, which made up more than half of the 38 musicians, were allowed to pass the Qalandia checkpoint, a gateway to Jerusalem. The Israeli guards did not explain why they allowed or denied certain musicians from passing the checkpoint, so we were forced to cancel our concert. Knowing how much effort the musicians had put into preparation, I felt disheartened to end the orchestra workshop without a final concert.

I ran into a French music teacher from another music school at a restaurant in Ramallah, who told me about her experience of leading a music workshop for Palestinian students in Gaza in early June. “I’ve never experienced such attentive students before; these young students were totally focused on me during the entire workshop with such hunger for music,” she said. “It was almost surreal. You didn’t need to convince me playing music was their way to deal with their hardships; what they showed me was more than enough.” She told me that she could not keep her promise to see them again at the summer music camp in Ramallah, as the checkpoint in Gaza closed soon after she left and the special permits for the students to come to Ramallah became useless. “I can now understand why people say Inshallah [in Arabic, “God willing”],” she said, to which I wholeheartedly agreed. “Here, we just don’t know what will happen next.”

I left the West Bank just as the airstrikes in Gaza began on July 7. Now that I am back in the US, I miss “Welcome to Palestine!,” which I heard from passers-by at least once a day when I walked down the streets in Ramallah, since it was clear I was not a local. I sometimes wonder how many Palestinian children in Gaza who participated in the music workshop with the French teacher survived the Israeli airstrikes.

During my last few days in Palestine, my first thought each morning was: I wonder how many people died the night before. Most raids happened at night and there were often clashes between Palestinians and the Israeli military. But life still went on. Children played in the streets and people laughed and kept going on with their daily business. Surely, this behavior reflected the strong sense of resilience that Palestinians develop, having heard what all my Palestinian roommates, neighbors and friends had gone through over the years even before the current violent escalation.

Music schools will continue to apply for permits to perform music events in Gaza and Jerusalem. And I am confident that Al Kamandjati will continue to organize its music festivals year after year and Palestinian musicians will keep trying to play music in Jerusalem. I have even heard of a few musicians who climbed the Separation Wall to perform at a concert in Jerusalem last year. I just hope that someday musicians won’t have to worry about getting permits or events being canceled or risking their lives for music.

Shinhee Kim recently served as the academic and artistic coordinator for Al Kamandjati, a nonprofit music organization in Ramallah, Palestine. She holds a master’s degree from the Fletcher School of Law and Diplomacy, where she wrote her thesis on the effectiveness of music therapy for children in post-conflict countries. In addition, she has a bachelor’s degree in violin performance and a second master’s degree in music education from the Oberlin Conservatory of Music. Kim was a Peace Corps volunteer in Paraguay, and has performed the violin professionally and taught music at public schools in the United States.

2 thoughts on “Music in the Midst of Violence: A Story From Palestine”

What the Post-Pandemic World Could Look Like: A View From the Global South 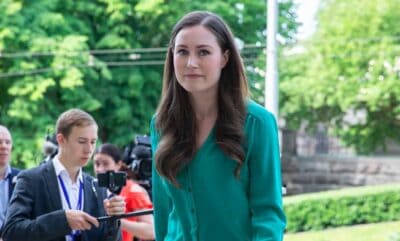