An unprecedented imbalance in sex ratios of more boys than girls being born is seriously underway in six Asian countries. As the imbalances spread across reproductive and marriageable age groups, the well-being of those Asian nations, which together represent nearly two-fifths of the world’s population, is threatened.

The unusually high sex ratios at birth favoring sons in six countries — China, Azerbaijan, Armenia, Vietnam, India and Georgia — are not normal reproductive results for a society. On the contrary, the increasing sex imbalances at birth are primarily a result of a combination of three important factors: a strong preference of couples for sons over daughters; fetal-sex determination followed by abortions of female fetuses; and rapid declines in the number of children per couple to comparatively low levels. 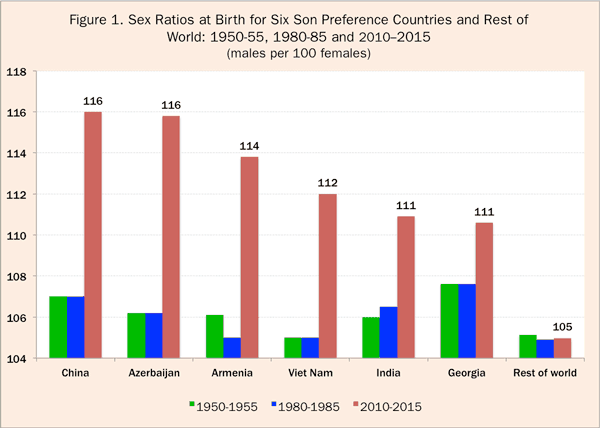 Until the mid-1980s, the sex ratios at birth of those six Asian countries were not abnormal and relatively stable, typically falling within a narrow range not exceeding 108 male births per 100 female births. But the rapid spread of prenatal sex-detection technologies, particularly mobile ultrasound equipment, has given couples the ability to choose whether to terminate a pregnancy based on the sex of the fetus.

At the same time, fertility rates were declining to comparatively low levels, especially in China, with its introduction of the one-child policy. The high fertility levels of the 1950s, which were clearly dropping by the mid-1980s, have now reached near or below the replacement fertility level of approximately two births per woman (Figure 2, data from UN Population Division). Replacement fertility level means the average number of children born per woman at which a population exactly replaces itself from one generation to the next, without migration. 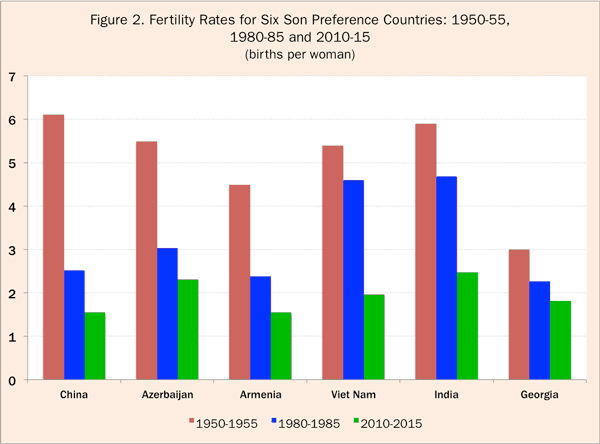 As the size of Asian families shrank, the practice of aborting female fetuses increased markedly to ensure that a couple would have at least one son. After the first birth, sex ratios for subsequent births were often even more skewed in favor of sons. Second-order births in China, for instance, resulted in a sex ratio at birth in excess of 140 boys for every 100 girls.

In principle, China allowing couples to have two children should have reduced the practice of sex-selective abortion, but in urban areas couples may not be inclined to want a second child, given the costs of raising children and the work of a larger family, especially if they already have a son.

Considerable differences in sex ratios at birth also occur at local levels among the six countries. With the widespread dissemination of sex-detection technologies, much higher sex ratios at birth have been occurring in particular provinces and states.

Sex ratios at birth have also been found to vary markedly by religious group. While some religious groups in India exhibit high sex ratios, such as Sikhs (130) and Jains (118), others have sex ratios closer to normal, such as Muslims (107) and Christians (104). Hindus and Buddhists fall in between, at 111 and 108 boys per 100 females, respectively.

The forces behind son preference among many Asian countries are widely acknowledged. Traditionally, sons are considered more valuable than daughters because males generally earn higher incomes, continue the family name and lineage, inherit the family’s wealth, perform religious rites and ceremonies and are responsible in patriarchal cultures for their parents as they age.

Daughters, by contrast, often move into the husband’s family after marriage, are not responsible for their parents and receive less inheritance. In some cases, notably in India, couples having daughters incur costly marriage dowry expenses.

Reflecting the strong preference for sons, the raising of a daughter, according to one Indian saying, is like watering the neighbor’s garden. While couples generally acknowledge that both sexes are needed for society’s well-being, they choose to have sons and let others have daughters.

Concerned about the spreading sex imbalances on society, especially for the numerous men in the reproductive-age groups who will not be able to find a suitable wife someday, many Asian countries, including China, India, Georgia, Nepal, South Korea and Vietnam, have enacted laws making it illegal for a doctor to reveal the sex of a fetus to expecting parents. Such laws, however, are difficult to enforce, especially given the strong preference for sons and the reluctance of couples and medical workers to cooperate with government regulations mostly aimed at the more abstract notion of improving society.

Proving that an abortion had been carried out for sex-selective purposes is also an extremely difficult legal undertaking.

Besides legislating against the practice of fetal-sex determination, governments and civil society organizations have taken other initiatives to address sex-selective abortions and the resulting sex-ratio imbalances. Information campaign policies and programs are aiming to reduce the perceived liabilities of having daughters, including offering couples cash payments at the birth and marriage of their daughters, additional financial incentives and support, pension benefits, improved health care and schooling for girls, including scholarships.

Demographic projections, particularly for China and India, indicate that men will vastly outnumber women of marriageable ages, and that those imbalances will continue for at least several generations. The enormous surplus of bachelors in the six Asian countries may encourage men to seek brides in younger age groups as well as incite more child marriages. Unable to marry locally, men with enough money may turn to importing brides from other countries.

Nevertheless, due to the substantial shortage of eligible women, the result will be tens of millions of young men remaining single without being able to reproduce and start a family. Such demographic results will be especially pronounced among men with limited education and low socioeconomic class.

In China, for example, 94 percent of unmarried people aged 28 to 49 years old are male and virtually all of them have not completed high school.

One Asian country whose sex ratio at birth has returned to normal levels after being high in the recent past is South Korea. While 25 years ago, the Korean sex ratio at birth had increased to about 114 boys per 100 girls, the ratio has fallen back to its normal level of 107. Yet, the surplus of Korean bachelors produced in the past decades has attracted brides from abroad. One study reported that one of every nine Korean marriages contracted in recent years was mixed, mostly between a Korean man and a foreign woman.

Recent research findings show that a decline in elevated sex ratios at birth may occur soon in China and India as well as in other Asian countries. Child sex ratios are believed to have peaked and are beginning to decline to more normal values in some provinces and states.

Still, even if sex ratios at birth in the six Asian countries fell immediately to normal levels, the existing sex ratios among children will result in significant large-scale imbalances between adult men and women that will persist for decades. While the social, economic and political consequences of sex imbalances among young men and women are difficult to predict, one thing appears certain: Asian governments can do little to change the stark demographic facts conspicuously unfolding in front of them.