Cloaked in Secrecy: How the Saudis’ $110 Million Gift to UN Counterterrorism Is Being Spent

The United Nations Counter-Terrorism Center was set up in 2011 with money from Saudi Arabia to combat terrorism worldwide. Some experts, however, now question the center’s ability to eliminate terrorist threats. There are also questions about whether the money that the Saudis donated, a whopping $110 million, is being spent effectively. The Saudi donation is the largest to the center by far.

A global agency to combat terrorism and to prevent violent extremism was first proposed by King Abdullah of Saudi Arabia in 2005. A year later, the UN General Assembly approved the creation of an international center as a strategy to fight terrorism, and the center was born as part of the Counter-Terrorism Implementation Task Force, a network of 38 entities consisting mostly of UN departments, agencies or programs, such as the UN Office on Drugs and Crime, but also outside organizations like Interpol.

The task force is directed by Jehangir Khan of Pakistan, a longtime official in the UN Secretariat, specializing in the Middle East, West Asia and other areas.

The Saudis chipped in $10 million in 2011 to make the center operational, and another $100 million in 2014 to be used over five years. The goal: to “help provide the tools, technologies and methods to combat and eliminate the threat of terror,” according to the Saudi ambassador to the United States at the time, Adel al-Jubeir, who had traveled to the UN from Washington, D.C., to hand the check to UN Secretary-General Ban Ki-moon.

Other donations and pledges, amounting to about 10 percent of the center’s budget, come from the US, the European Union, Britain and Germany.

The main objectives of the center and the task force are identifying the root causes behind the spread of terrorism and building the abilities of countries to fight it within and across borders. Most task force projects are being done in African countries in the Sahel and Horn of Africa regions, which generally lack the resources and experience to combat terrorism on their own and face a creeping epidemic of terrorist actions by groups such as Al Shabab, Boko Haram and Al Qaeda.

The task force carries out the center’s daily work and devises plans to fight terrorism not only regionally and nationally but also globally. The task force, for example, coordinates a foreign terrorist fighter plan of 37 projects submitted by its member entities.

An advisory board, consisting of 21 UN member states and the European Union as a guest member, guides the center’s policies and programs. The center falls under the purview of the UN secretary-general and the Department of Political Affairs. The director of the center and the task force formally briefs the General Assembly every two years through a report from the secretary-general. In one review, the assembly asked the center to do more work to counter ISIS (Daesh) and Al Qaeda.

Saudi Arabia’s ambassador to the UN, Abdallah Yahya al-Mouallimi, is chairman of the task force’s advisory board. Yet it is unclear how or whether the Saudis influence the center’s activities. Al-Mouallimi referred all questions to the center. UN officials at the center spoke to PassBlue on background only because of the sensitivity of their work.

The Saudi donation of $100 million had one condition, said the UN official who spoke on background: it would not be used as an ATM. By the fifth year of the grant, 2016, the center should use no more than 35 percent of its budget on human resources. That means that $40 million should have been earmarked for use on its dozens of projects so far.

The center did not respond on deadline to repeated PassBlue requests for a breakdown of the expenditures or details on the projects. But its most recent annual report, released Dec. 31, 2015, showed that the center had an income of approximately $9.2 million in 2015: $2.6 million of which directly came from Saudi Arabia, and expenditures of $7.2 million.

Nearly half of that (49 percent, or $3.5 million) was spent on human resources and another 8 percent on operating expenses.

This means that the center used about 57 percent of its budget on staffing and operating expenses and 43 percent on projects in its third year, the latest for which figures are available. The staff costs as of 2015 were less than in 2011 (65 percent), but the center is still far from achieving its goal of 35 percent by next year.

To maintain transparency and accountability, the Counter-Terrorism Center says it established a “results-based framework” to measure its projects’ effects. But the center’s website describes the process of monitoring and evaluation without providing concrete examples of the projects themselves.

Some projects address the life cycle of foreign terrorist fighters, analyzing their radicalization and providing rehabilitation, the UN official said on background. The center debriefs terrorists to better understand what compelled them to join, say, ISIS. Another project aims to reinforce border security, including air borders, called Advance Passenger Information. It is working on border issues in such regions as Mali and Burkina Faso in West Africa. A third project supports human-rights training for law enforcement agencies and security forces in countries like Nigeria.

Eric Rosand, a former lawyer with the US mission to the UN and a senior State Department counterterrorism official, who is currently a fellow at the Brookings Institution, praised the UN in general for its norm-setting abilities.

“However, it — UN system/secretariat/agencies — has trouble moving beyond the norms and putting in place practical tools/guidance/assistance to help states implement the norms. Reasons for this include: lack of coordination, too many players, too much bureaucracy, too many politics,” Rosand wrote in a follow-up email after a phone interview.

This project-based, “fractured” approach — involving many players — lacks coordination and effectiveness, Rosand said. Worse, it gets buried by bureaucracy.

Instead, the “UN should look to do more convening of practitioners/policymakers around key CT/CVE [counterterrorism and countering violent extremism] themes,” Rosand added in his email. That approach could facilitate “more sharing of experience/expertise/challenges.” The UN could also develop training modules and draw on expertise from inside and outside the organization to provide governments the capacity to carry out elements of the rule of law-based CT/CVE framework.

The problem is, he wrote, it takes the “UN system way too long to develop such modules and deploy assistance teams” and is “much more expensive than what other partners can deliver.”

Rosand refuted, however, rumors in the UN that the center is beholden to Saudi-preferred projects.

“Saudis want to be seen as a leader in counterterrorism and to show their commitment to global terrorism cooperation,” he said.

Saudi Arabia claims to have much more to contribute to global counterterrorism efforts since the 9/11 attacks, which were carried out largely by Saudi citizens. Another Brookings scholar, William McCants, called the Saudis “both the arsonists and the firefighters” in countering terrorism.

“Whether non-state actors like Al-Qaeda or the Islamic State militant group (ISIS), or state sponsored extremism from Iran and its proxies, Saudi Arabia has, as much as any other country, a national security incentive to stop the men, money and mindset that foments terrorism and violent extremism,” wrote Adel bin Ahmed Al-Jubeir, currently the Saudi foreign minister, in February 2016 in an op-ed essay. 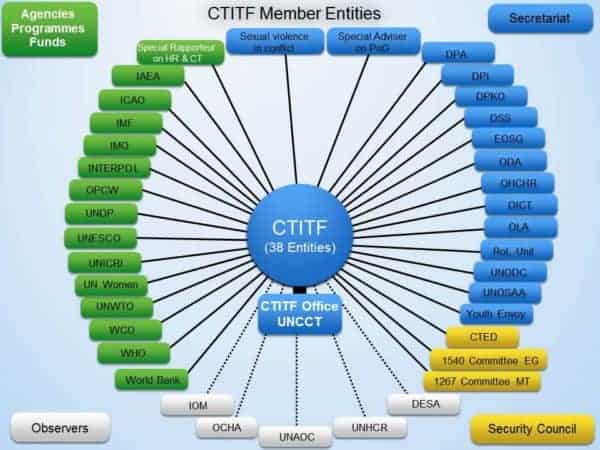 Since 9/11, Saudi Arabia not only initiated the establishment of the UN Counter-Terrorism Center, but also arrested extremists within its borders, tried them before special courts and imposed the ultimate penalties on those convicted, Al-Jubeir wrote.

Global unease persists, however, as to how Saudi ideology toward Israel and the US role in Iraq have been inadvertently feeding fundamentalism and violent extremism.

Adding to these concerns is loud public outcry against Saudi Arabia’s human-rights record, its aerial bombing of Houthi rebels in Yemen, including hospitals, funerals and weddings, in the last 19 months, and the recent authorization of the “Saudi bill,” allowing American families of 9/11 victims to sue Saudi Arabia for damages in the US, based on the nationality of the terrorists involved.

Saudi Arabia has also been temporarily suspended from the UN’s annual Children and Armed Conflict annex for 2015, which lists abusers of children in war, or what the UN calls “grave violations committed against children.”

The Saudi delegation to the UN carried out an aggressive campaign for the country to be delisted from the annex last spring and succeeded partly, pending a further review with Saudi officials. So far, the Saudis have done little to nothing to remedy why they were originally put on the list, claimed another UN official knowledgeable with the situation.

Saudi Arabia is at risk to be listed in the UN’s 2016 report, given that the Saudi-led coalition continues to bomb civilian sites, the same UN official noted, killing children. In September, UN Secretary-General Ban met Saudi Deputy Crown Prince Mohammad Bin Salman Al Saud to discuss the continuing review of measures to strengthen protection of children in the Yemen war. The Saudi ambassador to the UN recently denied to reporters that his country would be on the list.

In the UN, explicit criticism of any member state, let alone Saudi Arabia, is nearly verboten. UN counterterrorism entities are loathe to name any country to be tainted by terrorism, and the organization’s 193 member states have never agreed on a specific definition of terrorism. But 100 of them have foreign-terrorist fighters in their borders, a UN official cited from the task force.

The UN has been expanding its role in countering terrorism to include violent extremism, which the UN Security Council linked to terrorism in Resolution 2178 in 2014. Ban unrolled a major plan to prevent violent extremism in July 2016. The very nature of terrorism, however, means that the public and the perpetrators continue to know little about the UN’s work trying to make the world safer.

Ilgin Yorulmaz writes for Huffington Post and Mustesna Istanbul, among other publications. She earned an M.S. from the Columbia University Graduate School of Journalism, during which she received a 2016 White House Correspondents’ Association scholarship and a 2016 Fellowship at Auschwitz for the Study of Professional Ethics, among other awards. In addition, she has an M.A. in international relations and economics from the International University of Japan in Niigata; and a B.A. in business administration from Bogazici University in Istanbul. Yorulmaz speaks Turkish, Japanese, French and English.