One Advantage Women Have Over Men: They Live Longer

Despite the gender longevity gap, not much interest has been paid to women living longer than men and what the gap can mean for society. But increasing the chances of male survival has a broad effect: it reduces premature deaths of boys and men, shortens periods of widowhood, contributes to a family’s integrity, helps balance sex ratios, especially among older people, and improves economic returns and productivity for a country overall.

The gap is largest in Eastern Europe, especially in Belarus, Lithuania, Russia and Ukraine, where the female advantage over men is more than 10 years at birth and about five years at age 60.

Paradoxically, some of the lowest gaps are found in the high-mortality countries of Africa, such as Lesotho, Mali, Nigeria and Swaziland, where the female advantage is one year or less.

The reduction in the rate of female longevity in many low-mortality countries, such as the US, in the last four decades is a result of more gains by several years in the life expectancy of males at birth.

Certainly, the longevity advantage of females is partly related to inherent biological differences between the sexes. For example, newborn girls have a biological advantage in survival over newborn boys. In circumstances where boys and girls have the same access to resources, such as food and medical care, girls also have lower death rates than boys during childhood.

Noteworthy exceptions are China and India, the only countries in the world where female infant mortality was higher than male infant mortality in the 2000s. The discrepancy relates to preferential care of boys over girls in their first year of life. (Sex-selective abortion rates are high in the two countries, too, with a report saying five million to seven million abortions are done in India annually.) 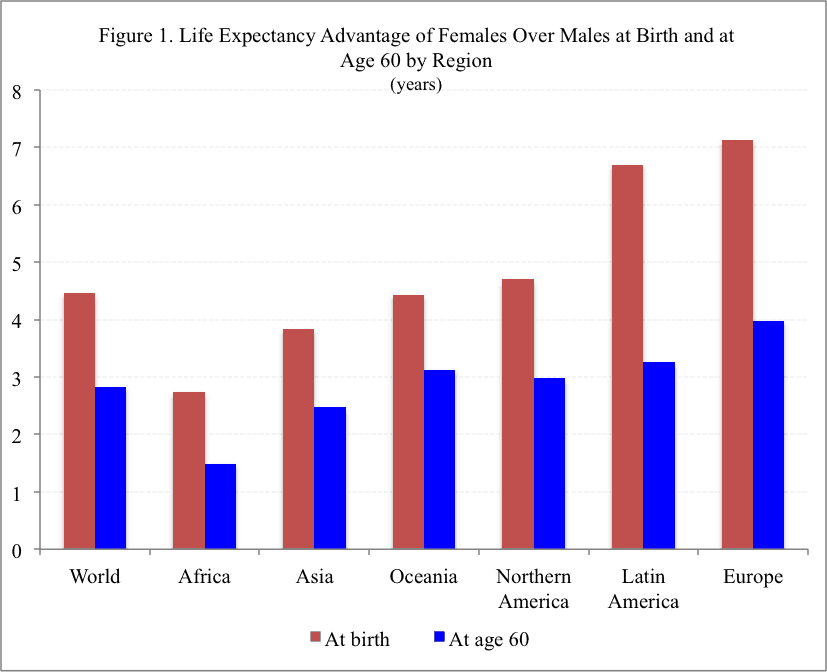 Besides biological differences, the magnitude of the female longevity advantage also depends on social, economic and environmental conditions. Lifestyles, personal behavior and societal norms contribute to female longevity and explain why the life-span gap varies widely among countries.

Worldwide deaths related to tobacco smoking, alcohol consumption and illicit drug use are higher for men than women. Estimates show that men smoke nearly five times as much as women, consume twice the level of alcohol and have higher rates of use or dependence on illicit substances than women.

Russian men, for example, are likely to die 13 years earlier than Russian women, partly because they drink and smoke more heavily than women. By contrast, in the low-mortality countries of Australia, Britain, Israel, Italy, Norway, Sweden and Switzerland, the female gain at birth is about four years.

Far more men than women die each year from road traffic injuries. Worldwide, nearly three times as many men as women die in motor-vehicle crashes. Besides driving more, men engage more often than women in risky behavior on the road, such as not wearing seat belts, speeding and driving under the influence of alcohol. Road traffic injuries are the biggest killers of teenagers globally, with most being males 10 to 19 years old.

Work-related deaths are predominately made up of men, as women tend to work in less hazardous industries and occupations. In Britain and the US, for example, men account for more than 90 percent of fatal work injuries.

Men are also much more likely than women to be intentional homicide victims. Worldwide, about four out of five murder victims are male. Among countries with some of the highest homicide rates, such as El Salvador, Guatemala and Honduras, about 90 percent of the victims are male.

In conflict-related deaths, men are much more likely to be victims than women. For example, males accounted for approximately 98 percent of US military deaths in Iraq from 2003 to 2008. 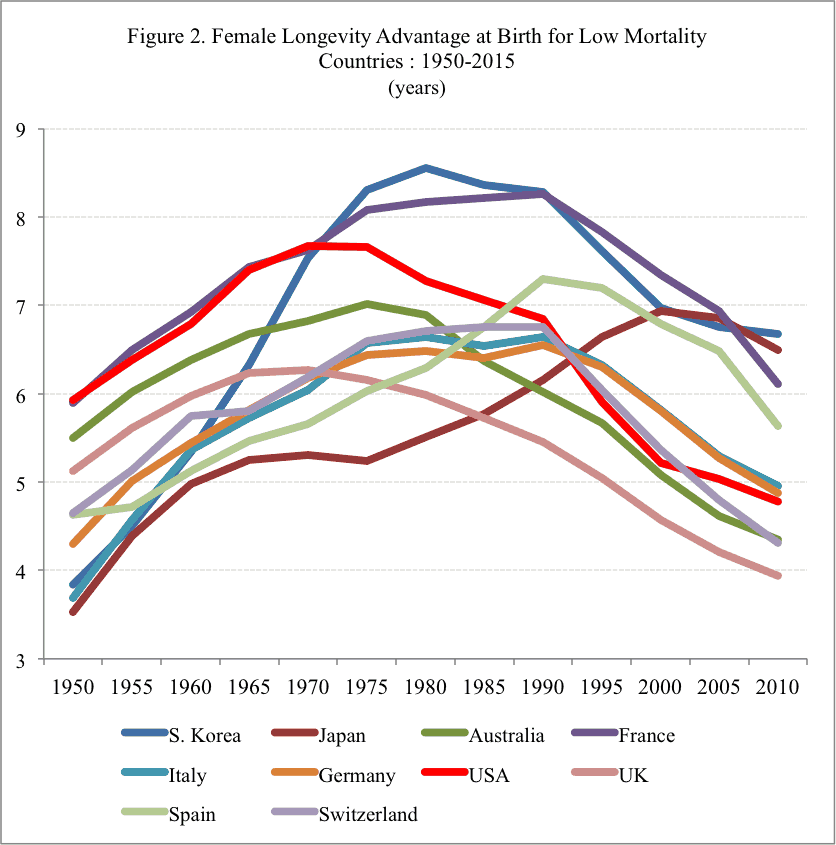 Although life expectancy for both men and women in low-mortality countries is increasing, it is happening faster for males. Improvements in how men live, including less smoking, regular exercise and eating healthfully, are extending their ages.

In Britain, some experts predict that by 2030 males and females will have virtually the same life spans. Apparently, British men are moving toward healthier activities, including eating better, exercising, not smoking and seeking preventive medical care.

At the same time, however, more women overall are adopting male life expectancies, through increased smoking, for example, resulting in higher rates of lung cancer. Women are also experiencing the negative aspects of corporate life more often, inducing high stress levels coupled with unhealthy diets, excess weight, long periods away from home and too much drinking.

Despite the impressive gains in lowering mortality, the gender longevity gap persists. Better efforts are needed to address the factors contributing to the gap. All societies can gain.

One Advantage Women Have Over Men: They Live Longer