US Pressures UN Chief to Take the Executive Reins

António Guterres just laid out his first major reform plan for the United Nations through a report presenting concrete suggestions embedded in wonky language and hyperbole. One recommendation that stands out is the emphasis by Guterres, the secretary-general, to reassert his role as the chief executive of the UN.

It is that emphasis on centralizing power at the top that is making some member states nervous, said a diplomat, aware that the United States, the UN’s biggest donor, is the main mover and shaker behind such changes. The diplomat also noted that although most countries support reform, there is no organized group of nations to oversee such steps, as has been done in the past. That missing element could result in overhauls that do not have full support from a majority of countries.

The bold reforms proposed in the report enable the executive office to remake the UN development system, a maze of UN entities led by the UN Development Program. The report’s overarching focus on the Sustainable Development Goals — “our boldest agenda for humanity,” Guterres called them — aims to shift primary control from UN development work on the ground to regional UN commissions reporting directly to the secretary-general.

Three separate letters — from the United States, the European Union delegation to the UN and the CANZ group (Australia, Canada, New Zealand and others) — encapsulate the diverse reactions to the reform plan, which was introduced by Guterres at a public session on July 5. (See the video below.) Guterres began his five-year term as secretary-general on Jan. 1, 2017.

The draft letter from the US ambassador to the UN, Nikki Haley, dated July 10, is by far the slightest yet arguably the most important of the three correspondences.

The Haley letter has two parts, one addressed “Dear Colleagues,” to fellow diplomats; the other to Guterres. Both highlight the need for Guterres to use his “executive authority.” Some diplomats call the Haley letter “unconsultative.”

Europe’s letter, addressed to Guterres, stresses the value of cooperation by the Continent with the secretary-general, who is Portuguese; the CANZ letter pushes for reform but asks for more dialogue and transparency in the process. Indicating its moderate demand, it was sent to Guterres’s chief of staff, Maria Luiza Ribeiro Viotti.

Guterres’s 24-page report outlining steps for reform included the participation of UN member delegations, although some diplomats might say their role was limited. It notes the UN’s overwhelming need to streamline its ancient bureaucratic practices and join the modern era pronto.

This is hardly the first time a UN secretary-general has proposed sweeping changes to the UN and not the first time that the US is threatening to lop off its financial contributions unless the organization transforms, or at least cuts dead wood.

The next step in moving on UN reform is to occur at a retreat on July 22 at Greentree, the UN’s off-site destination on Long Island. Guterres’s press office would not confirm who was invited but said that it would encompass all regional blocs of the UN. The retreat will be the first time the blocs will voice their opinions on Guterres’s agenda in an open setting. 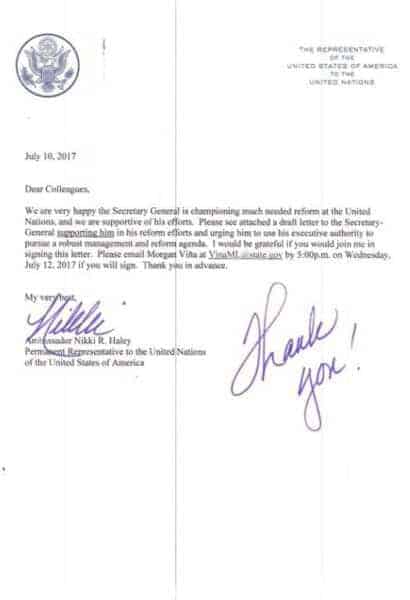 The Haley letter, of which PassBlue obtained a copy, offers few details on what the US expects for UN reform.  According to a diplomat with knowledge of the letter, it was sent to countries with “relations” to the US.

The Group of 77 countries at the UN, led most often by China and now consisting of 134 middle- and low-income nations, are not considered to have tight “relations” with the US, so they were most likely not recipients of the letter.

The G77 has not responded formally to Guterres on his reform plan, preferring instead to talk about it at the retreat and not overly pressure him. One main concern the group has about the plan, according to the diplomat, is that Guterres could make executive decisions without consulting the G77. That could mean underrepresentation in high-level jobs in the UN, including fewer women on board.

Members of the CANZ group that have endorsed Haley’s letter so far include Australia, Canada, Israel, Japan, New Zealand and South Korea. Dozens of other countries that have signed on include Britain, Croatia, Greece, Georgia, Macedonia, Montenegro and Ukraine; Qatar, Saudi Arabia, the United Arab Emirates and Yemen; Ecuador and Honduras; Kazakhstan, Turkmenistan and Uzbekistan; Bangladesh; and Democratic Republic of the Congo, Liberia, Morocco, Niger, Nigeria and South Sudan.

The deadline was extended a week to July 19. The extension may reflect the little time that countries have been able to analyze the Guterres report but it could also leave fewer opportunities for countries to obstruct the plan.

The letter to “Dear Colleagues,” signed by Haley, begins: “We are very happy the Secretary General is championing much needed reform at the United Nations, and we are supportive of his efforts. Please see attached a draft letter to the Secretary-General supporting him [the two words underlined] in his reform efforts and urging him to use his executive authority to pursue a robust management and reform agenda.”

Haley’s attached letter to Guterres starts: “We write to extend our appreciation and support for your reform agenda. We believe that in order for the United Nations to be an effective and lasting institution, it must change the way it does business. You have an opportunity to lead this transformation.”

The letter, four paragraphs long, exhorts him to “use your executive authority [last two words underlined] to advance organizational reforms. We will support you fully in exercising such authority — and urge you to reclaim the powers that have been eroded over time.”

The UN, the letter adds, “cannot afford to be crippled by bureaucracy and micromanagement.” Haley does not lay out how much authority Guterres should seize but says the “window of opportunity” to make the UN more “flexible and efficient” is “fleeting.” 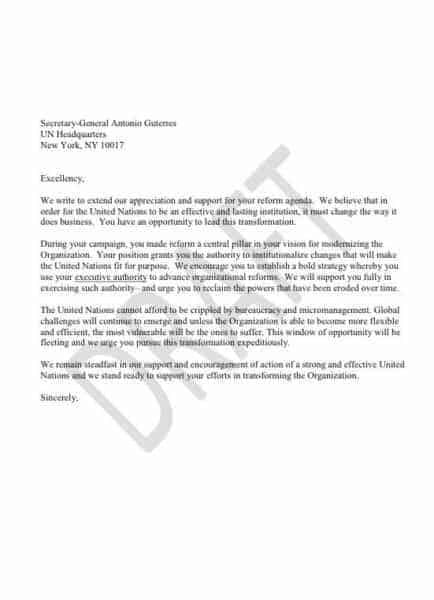 By contrast, the four-page letter to Guterres from the European Union responds to the reform report in detail. Signed by the ambassador of the EU delegation to the UN, João Vale de Almeida, his message notes that Guterres’s “holistic approach” to conflict prevention will “make the UN fit for the purpose under the leadership and authority of the Secretary General.”

Almeida also praises “positive” steps taken by Guterres, including the creation of a counterterrorism agency. (As part of the Security Council’s deal last fall to unanimously choose Guterres as secretary-general, it agreed to accept a Russian demand to lead the new counterterrorism office. That person was announced in June: Vladimir Ivanovich Voronkov.)

The third letter, signed by ambassadors from Australia, Canada, Israel, Japan, Mexico, New Zealand, Norway, South Korea, Turkey and smaller nations, refers to the need for Guterres “to act boldly and decisively” in reform. As the UN’s “chief administrative officer,” it continues, “he has a wide mandate to take such measures. In our view the Secretary-General should take full advantage of this authority.”

The letter, to Viotti, asks for Guterres to tackle reform through “open communication and transparency” and to provide more information, before the July 22 retreat, on his vision for remaking management.

Guterres, a former prime minister of Portugal and head of the UN refugee agency for 10 years, recently traveled to Washington, D.C., to meet with high-ranking members of Congress and Rex Tillerson, US secretary of state.

His purpose was to discuss UN reform and possible budget cuts proposed by Trump to the UN. The UN released few details of Guterres’s exchanges with Congress and Tillerson. According to a former UN official familiar with the inner workings of the Secretariat, not even a note taker accompanied Guterres to the prime meetings.

What UN reform will entail and whether it will win over the hearts and minds of all UN member countries could become evident over the next months. Guterres delivers a follow-up report in December.

This column, Nikki Haley Watch, will cover the US ambassador’s relationship to the UN and other relevant news. Tell us what you think: passblue1@gmail.com

US Pressures UN Chief to Take the Executive Reins