Nikki Haley has been appearing on American TV news programs an awful lot lately, so what gives? Some observers point to Haley as a refreshing and stable face amid an unpredictable White House and uncannily quiet secretary of state, while others herald her visibility as a sign of higher political ambitions.

Another possibility is that Haley has adopted a “telediplomacy” strategy: using the media to communicate foreign policy goals and achievements to audiences outside the diplomatic realm — to national constituencies.

Although Haley could use the international press corps based at the United Nations to reach foreign audiences and even hostile governments, she has projected most of her messages to the domestic arena, communicating to the American public instead of a broader contingent.

One American communications expert in foreign affairs said that the number of Haley’s appearances on TV news sites is unprecedented for a US ambassador to the UN.

Appearing often on TV news channels is not usually a top priority for an American diplomat represented at the UN — at least not for recent ambassadors. While Haley also sits on the White House National Security Council (as have other ambassadors), she is qualified to speak publicly about foreign policy, communicating those goals to Americans typically falls to the US secretary of state.

Reviewing web archives of six major American TV news sites — ABC, CBS, NBC, CNN, Fox and MSNBC — reveals that Samantha Power, Haley’s immediate predecessor at the UN, did one interview in her first seven months in office. At the beginning of her tenure at the UN, in October 2013, Power sat with NBC’s Savannah Guthrie in the UN Security Council chamber.

The interview was both a profile of Power, her journalism background and her gaffe in the 2008 Obama campaign (infamously referring to Hillary Clinton as a “monster,” for which she later apologized), and a discussion of the high-profile Security Council resolution on Syria’s chemical weapons, which Power championed at the time. Otherwise, Power shied away from news programs in her early months.

Erin Pelton, Samantha Power’s first communications director and spokeswoman, told PassBlue in an interview that the US mission to the UN was primarily focused during that period on “introducing Power to the UN community, outlining policy priorities and setting the right tone for her term” (which ended in late January 2017). Power’s interview with Guthrie enabled Americans to get to know their UN ambassador and hear about her work.

Haley has been much less camera shy. In her first seven months as ambassador, she has appeared on American TV news shows at least 23 times, or about three times a month. Even accounting for possible exclusion of some appearances from web archives, the rate is still a stark difference between Power and Haley over a similar time frame.

Despite the recent resignation of Haley’s communications director, Jonathan Wachtel, a former Fox News journalist, she hasn’t overly favored the channel. (She has been on CNN the most, which President Trump repeatedly labels “fake news.”) She even did an interview on MSNBC, which is widely regarded as the most left leaning of all major US-based media networks.

Generally, Haley does three types of appearances: sit-down profile interviews in the same style as Power’s, speaking about US-led resolutions in the UN Security Council; clarifying Trump’s comments and positions on a hot foreign-affairs topic; and how she’s implementing or modifying his policies at the UN.

In order of frequency, she has been speaking mostly about North Korea, Russia, Trump and the conflict in Syria. She has also joined Trump in criticizing Iran and the nuclear deal.

Haley will often do media rounds on the same day, appearing on many channels in the same polished, Jackie Kennedy-style suit or sheath dress. On April 24, she spoke on both “CBS This Morning” and NBC’s “Today” about tensions with North Korea. In August, she returned to “Today” and appeared on the curvy couch at “Fox & Friends” for a victory lap, after the Security Council unanimously approved a US-led sanctions resolution on North Korea.

Haley’s many TV media appearances, said Irwin Arieff in an op-ed for PassBlue, have benefited her personal brand and given the high-turbulent Trump administration an eloquent spokeswoman, especially in the void left by Secretary of State Rex Tillerson, who rarely speaks on news programs.

In a June 29 interview with CNN, Haley discussed the different communications styles of herself and Tillerson, saying he was more the “thoughtful,” “executive” type, and she tended to speak out more because she is “not afraid to say anything” and “not easily intimidated,” so she and Tillerson “complement” each other.

But Michele Manatt, a former senior policy adviser with the US State Department during the Clinton administration and currently a board member of the Diplomacy Center Foundation in Washington, said the role reversal of Haley and Tillerson is not as seamless as Haley conveys.

“They have different responsibilities,” Manatt said. “He is in charge of our State Department, our foreign ministry. He has thousands of people under his responsibility, in our missions and consulates all over the world. Her area of responsibility — the United Nations — is very serious. A lot depends on it. But it’s on a totally different scale.”

It is hardly unusual for diplomats to use the media as a foreign policy tool. This open method of diplomacy can be traced to Woodrow Wilson’s “Fourteen Points” and to Henry Kissinger’s “shuttle diplomacy.” Among current ambassadors of the UN Security Council, the French envoy, François Delattre, delivers pithy but conversational comments to the media before he heads into Security Council meetings.

These remarks and reporters’ questions are later transcribed and sent promptly to the journalists by email. The British ambassador, Matthew Rycroft, does the same. Haley, however, speaks only about once a month to reporters assembled outside the Council, despite her vow early on to be “transparent.”

On Aug. 25, she rallied media attention at the UN when she briefed reporters on her trip to the UN’s International Atomic Energy Agency in Vienna the same week. (She also remarked, as webcast below, on the number of reporters at the UN briefing, noting it was more than she expected.)

At the IAEA, she discussed how well it was monitoring and verifying the commitments by Iran to the Joint Comprehensive Plan of Action, or the Iran nuclear deal. (One problem, she said after her visit, was that the IAEA has no access to Iranian military sites, which she claims the agency has authority to visit. The Iranian government vehemently disagrees.)

One way to decipher why Haley may be giving so much time to American TV news can be found in a 2001 paper by Eytan Gilboa, “Diplomacy in the Media Age: Three Models of Uses and Effects.”

Gilboa, a director of the Center for International Communication at Bar-Ilan University in Israel, offers a definition for “media diplomacy”: officials using it “to communicate with state and non-state actors, to build confidence, and advance negotiations, and to mobilize public support for agreements.” That includes doing press conferences, interviews and even leaking information to journalists.

Media diplomacy can be especially helpful when direct channels of communication — to North Korea, for example — are unavailable. According to Manatt, media can be important in diplomacy when dealing with foreign governments and publics, friend or foe.

As the world has witnessed, Trump uses the media most notoriously through Twitter. But the lack of a coherent media strategy from the White House has allowed Haley, many media say, to become an important voice for both the American public and foreign leaders.

“It’s a fine line when you’re working with the media, because you need to be very clear in what you’re saying and don’t want to leave any room for misinterpretation,” Manatt said. “But it’s very different with this administration. It’s very hard for the media to understand exactly what is being said. So I think they’ve responded, intentionally and aggressively, to Nikki Haley, who makes herself available to the media.”

Pelton, who is also a former US foreign service officer, worked not only for Power as communications chief but also for Susan Rice, when she was the US envoy to the UN. Pelton agreed that Haley’s media strategy is unprecedented for an ambassador. The White House, she said, was partly to blame.

“I think what is unprecedented is the looseness with which this administration conducts its foreign policy, and the communications are derivative of that,” Pelton said. “It’s not clear to me whether there are robust internal deliberations to vet the policy options and come to consensus decisions to implement them — part of that strategy can include communications.

“So it’s not surprising to me, because of that, you have cabinet secretaries who are winging it when it comes to the press. I think it underscores that she has her own agenda that transcends this administration, which is reflected in the kind of media she’s done and in the content of her media appearances.”

Yet it doesn’t appear that Haley’s top priority in doing TV news appearances is to advance thorny diplomatic negotiations. Her hallmark talking point has been North Korea in the last few months, yet she obviously didn’t need North Korea’s support to pass a Security Council resolution sanctioning it; she needed China’s.

The media, Pelton said, wouldn’t have been the appropriate channel to pressure China to agree to America’s side.

“Traditionally, the deliberations [on North Korea] happen on a bilateral level between the United States and China, often through the UN, but not always,” Pelton said. “And that has happened very quietly. I don’t know that the external, public pressure is necessary, although it can be a helpful tool. Generally, I don’t think it would come from the UN ambassador at that point, it would come from the president, secretary of state, or secretary of defense.

That way, the US ambassador could say to her interlocutors: ‘This has been stated clearly by my president, and so you have to come to an understanding with us on this.’ So I’m not necessarily sure it has to be Haley.”

So if Haley didn’t need the media to convince China not to veto the proposed sanctions resolution, why did she make so many media appearances?

According to a Chicago Council on Global Affairs’ recent poll on American perceptions of North Korea, 75 percent of the respondents said that North Korea’s nuclear program is a “critical threat” facing the US. That percentage is up from 60 percent in 2016 and 55 percent in 2015.

Most significantly, 76 percent of Americans overall — with little notable spread on political party affiliation — say they would support imposing tighter economic sanctions on North Korea. Which is exactly what Haley and the Security Council have delivered. 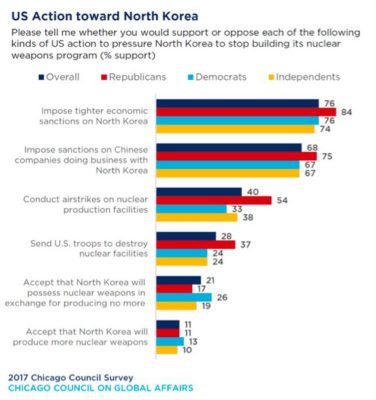 While American media can be a channel for sending messages to North Korea, Haley’s target audience appears to be domestic. Her media strategy reveals a disregard for foreign media consumers and points to other priorities for the ambassador, Pelton said.

“If she didn’t have national political ambitions, I think you would see her engaging more in the UN at large — whether that’s attending [Security] Council trips, doing more [media] stakeouts, engaging the UN press corps in a more close way rather than keeping them at arms’ length,” she added.

“I think she’s not doing any of those things because her goal is pretty singular: leverage this platform to go on to higher office. I think time will bear that out, whether it’s secretary of state or running for another office. This just seems to be a steppingstone to something else, and everything else she does has to be viewed through that lens.”