When Deaths Exceed Births, Countries Can Turn to Immigration

The demography is clear: when deaths outnumber births — excluding for zero immigration — populations decline. That simple yet powerful demographic relationship is irrefutable, regardless of geography, era, economics, political ideology or religious belief.

Yet many politicians around the world, who typically have short-term perspectives, particularly those living in countries facing population decline and large aging sectors, ignore, dismiss or downplay the far-reaching consequences of that demographic axiom. They somehow believe that the basic demographic relationship among births, deaths and immigration doesn’t apply to them or will be a problem only in the far-off future.

Countries contending with low birth rates are found throughout Europe, Asia, the Americas and Oceania (the South Pacific). Africa is experiencing the opposite effect, with high birth rates. The political consequences for all countries is being played out in rising migration from poor countries to wealthier ones, sowing the seeds of far-right nationalist politics that use the migration phenomenon to win over voters, raise money and advance nativist policies.

It was indeed the case that countries generally experienced more births than deaths annually throughout most of the 20th century, which contributed to a nearly fourfold increase in world population over that period, from 1.6 to 6.1 billion. From 1950 to 1975, for example, virtually no country reported more deaths than births annually. Beginning in the mid-’70s, however, a handful of countries began having more deaths than births. That number has now grown to some 20 countries, including Germany, Greece, Hungary, Italy, Japan, Poland, Russia and Ukraine.

By midcentury, the number of countries with negative rates of natural increase — that is, births minus deaths during a year — is expected to nearly triple. By the close of the century, approximately 120 countries are projected to experience more deaths than births annually (Figure 1). 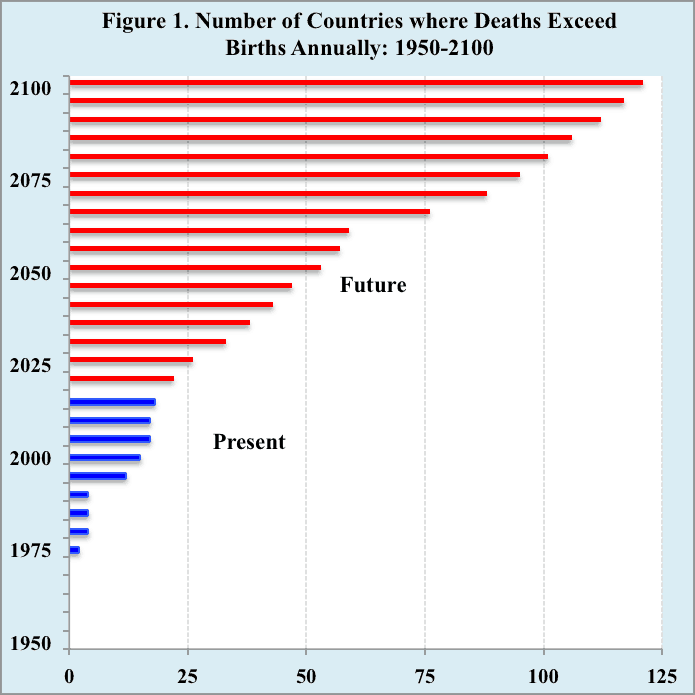 The current and projected negative rates of natural increase are not related to high mortality rates, which by and large are at relatively low levels and have been declining globally. The negative rates are basically a result of fertility rates falling below the replacement level of about two births per woman. With more opportunities for higher education, employment, careers and economic independence, combined with highly effective contraception, young women are deciding to have fewer children or avoiding motherhood altogether.

It is estimated that 83 countries, representing 46 percent of the world’s population of 7.6 billion, are experiencing below-replacement fertility. The 10 most populous countries with fertility rates below two births per woman, by ranking, are: China, United States, Brazil, Russia, Japan, Vietnam, Germany, Iran, Thailand and Britain.

As a result of the negative rates of natural increase, coupled with what we demographers call “insufficient compensating immigration,” the populations of nearly 40 countries, including China, Germany, Hungary, Italy, Japan, Poland, Russia, South Korea, Spain and Ukraine, are expected to become smaller by 2050 (Figure 2). The populations of more than 60 countries are projected to be smaller by the end of the century. 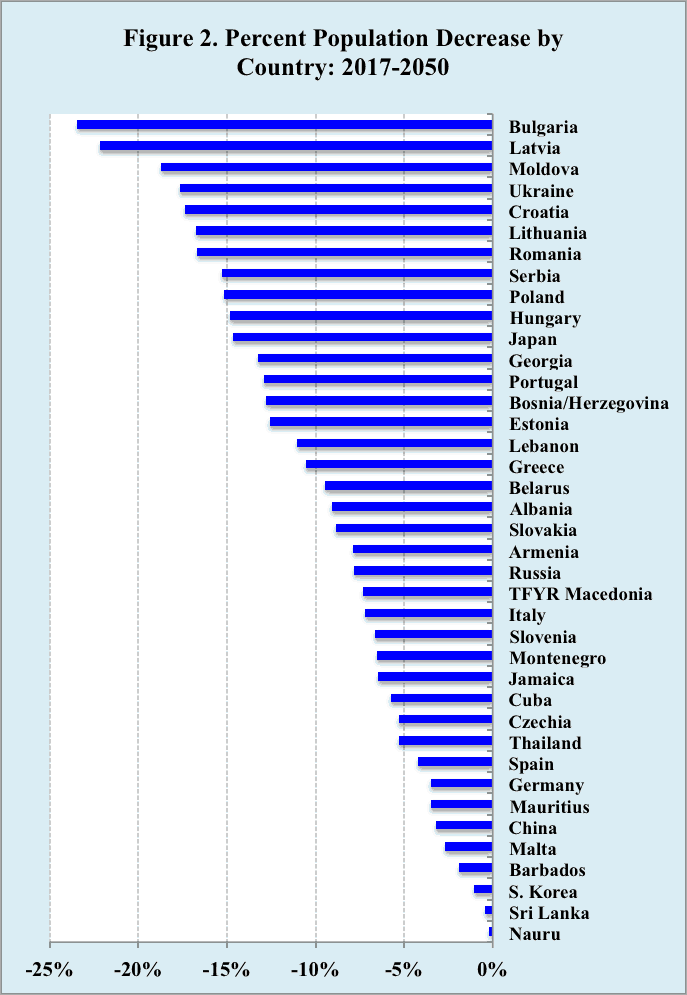 When populations and labor forces are expected to shrink and grow older in the future, countries have several policy options at their disposal. Governments can turn to immigration to compensate for the difference between births and deaths.

With a fertility rate well below the replacement level (1.6 births per woman), for example, the Canadian government has a pro-immigration policy that has resulted in admitting more than a quarter of million immigrants annually since the start of this century. Without immigration, the population of Canada in 2050 would be 10 million smaller and its median age six years older than currently projected with migration (Figure 3). 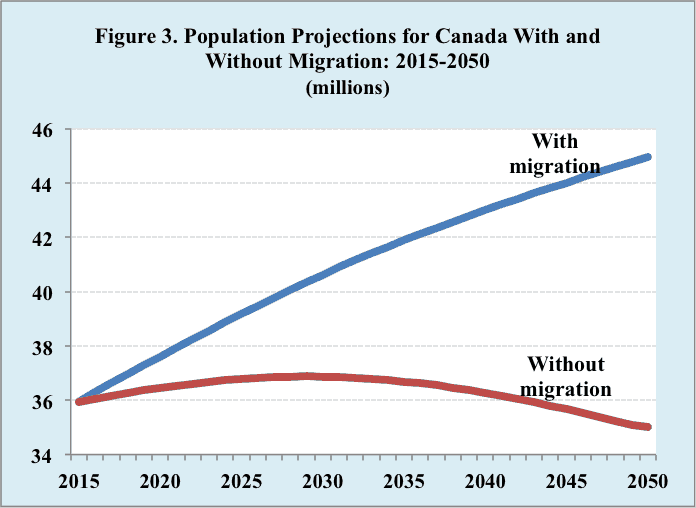 By contrast, many countries with low fertility rates, such as Hungary, Italy, Japan, Poland, Russia and South Korea, are immigration-averse and strive to preserve their ethnic homogeneity, with far-right politicians matching that rhetoric, notably in Hungary, Italy and Poland right now.

In many instances, especially in countries that have recently experienced large streams of migrants and asylum-seekers, such as Britain, Italy and Spain, immigration has become a highly contentious issue with few politicians prepared to embrace it publicly. Large proportions of the public in these countries are reported to agree with the statement, “There are so many foreigners living here, it doesn’t feel like home any more.”

Rather than turning to immigration to reverse negative rates of natural increase that lead to population decline, most of these governments are seeking to maintain their country’s cultural identity and focusing on raising their low fertility rates. While about 40 years ago, 13 countries had policies to raise fertility, the current number has quadrupled to 56, or about a third of the world’s population.

One route Japan is taking is turning to automation rather than immigration, relying on artificial intelligence and robots to provide labor to businesses and nursing care for its older citizens. Japan’s fertility rate of 1.4 births per woman has been below the replacement level since the mid-1970s.

Similarly at a press conference in Budapest, Hungary’s prime minister, Viktor Orban, said, “Hungary does not need a single migrant for the economy to work, or the population to sustain itself, or for the country to have a future.”

On other occasions, Orban said that migrants, many of whom are Muslims, are a threat to Europe’s Christian identity and culture. He has also said “migration is the Trojan wooden horse of terrorism” and reinforced fences are needed to keep out migrants. Like Japan, Hungary’s fertility rate of 1.4 births per woman has remained below the replacement level for decades.

By contrast, Germany’s chancellor, Angela Merkel, has supported immigration to the point of even threatening her chances of being re-elected. With nearly a half century of deaths exceeding births and fertility hovering around 1.4 births per woman, Merkel has embraced a welcoming policy of accepting asylum seekers and refugees.

At a 2016 news conference in Berlin, she noted that the principles of Germany’s constitution “mean we will give asylum to those who are politically persecuted and we will give protection to those who flee war and expulsion according to the Geneva Refugee Convention.”

Merkel has encountered vocal backlash, however, from various corners of her country, notably manifested in the Sept. 24 election, when the anti-immigration AfD (Alternative for Deutschland) group became the first far-right party to enter the Bundestag, or parliament, in six decades.

While it is widely acknowledged that every person added to a population makes more demands on the environment, environmental organizations and their supporters have generally avoided the issue of population growth, treating it as a taboo subject. They are wary of getting embroiled in the politics of reproductive health, especially abortion and immigration, fearing that to do so would jeopardize fund-raising as well as public support. Instead of welcoming declines in population size, environmental groups are mainly concentrating on energy strategies, technological fixes and conservation.

Generally, government attempts to raise fertility to replacement levels have mostly failed, as powerful economic and social forces keep fertility rates low. After decades of below-replacement fertility, few demographers and policy experts think that governments can reverse the trend by convincing women to return to bearing more children than they have been doing in the recent past. The financial, social and personal costs of raising additional children are simply too onerous, especially for women.

In Sweden, a proposal to encourage couples to take longer lunch hours to go home and have sex was roundly ridiculed. Similarly aiming to reverse its population decline, Russia has a Day of Conception, or Procreation Day, on Sept. 12. Couples who give birth on Russia Day, June 12, receive prizes like a refrigerator or television. In  Japan, more than 50 percent of local governments support single men and women through matchmaking and marriage seminars to help them wed and produce children. Such efforts have led to little impact on marriage and fertility rates.

As countries experience negative rates of natural increase, the comparatively young populations of many developing countries are growing rapidly. The populations of 30 countries located primarily in sub-Saharan Africa, including Nigeria (191 million), the Democratic Republic of the Congo (81 million) and Tanzania (57 million), are expected to at least double by midcentury, reaching 1.8 billion or close to a fifth of the world’s population by then. (Nigeria is projected to be the third-largest country by population in the world by 2050.)

The projected population increase of Niger, one of the world’s least-developed countries, is noteworthy. With a fertility rate of more than seven births per woman and half the population below 15 years old, Niger’s population of 21 million is expected to more than triple by midcentury, reaching more than 68 million people.

Looking simply at the numbers, some policymakers suggest international migration is a straightforward remedy to simultaneously address negative rates of natural increase and rapid rates of population increase. Similar to the open markets for trade, porous borders would allow greater movement of people across international borders, boosting global output, making the world richer and reducing poverty.

The suggestion for increased immigration is likely to appeal to most migrant-sending countries, whose growing youth populations are facing difficulties securing employment, forcing many to migrate. But that remedy will not be acceptable to governments of migrant-receiving countries, especially amid growing political resistance to allow more immigration, especially from Africa and Asia.

The United States, for example, has announced it will cap its refugee intake at 45,000 in 2018, the lowest rate since 1980, when the government created a ceiling, representing a huge reversal under the Obama administration.

How countries will address their declining and aging populations is paramount in the 21st century — affecting all 193 countries at the UN. The governments of most of the countries grappling with this problem seem to be hoping for a return to a demographic past that is irrecoverable. The sooner that governments accept the immutable realities of demography and understand the historic changes that are underway, the sooner they can cope with the far-reaching consequences for their countries.