A new women, peace and security index was unveiled at the United Nations recently. At its core, the WPS index, as it is known, provides evidence for what advocates have been saying all along: that the active and equal participation of women in all aspects of society is critical for peace and security, especially in vulnerable or conflict-ridden areas.

The index is published by the Georgetown Institute for Women, Peace and Security and the Peace Research Institute of Oslo. Using internationally recognized data to rank 153 countries, the index examines three key sectors: women’s inclusion, access to justice and security in the home, community and society. The people promoting the index say it is the first to bring together data in these three areas. It is also the first to examine the areas in the context of the Sustainable Development Goals.

The lead author of the index is Jeni Klugman, an economist who is the managing director of the Georgetown Institute and a fellow at the Kennedy School of Government’s Women in Public Policy Program at Harvard University.

In an interview with PassBlue, Melanne Verveer, executive director of the Georgetown Institute, said the index offered a comprehensive look at women’s well-being.

“If we have a snapshot solely of girls’ access to education, it is not enough if she’s not safe in her home or her community,” Verveer said at the introduction of the index on Oct. 26 at the UN. “So we need to better understand these conditions that affect women’s lives. If we don’t, we lose sight of why women are experiencing marginalization and denial of rights, which make their societies more likely to be vulnerable to instability and conflict.”

Verveer was the first United States ambassador at large for global women’s issues, a State Department post created by President Obama in 2009, with rank of assistant secretary. The position, meant to promote the progress of women and girls throughout the world through US foreign policy and US aid, has been vacant since Donald Trump became president.

Since then, the office has been a possible target of budget cuts, although it appears to have turned that corner, as chief executives of major American businesses and others urged Rex Tillerson, the US secretary of state, to name an ambassador to the office. 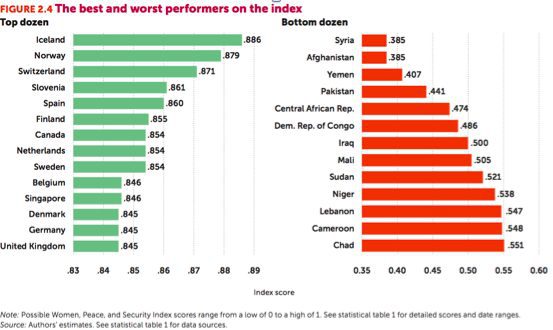 The position has now become heavily politicized as word that a conservative Christian activist, Penny Young Nance, the president of Concerned Women for America, is a possible candidate, drawing the ire of Democrats. The ambassadorship is also being subsumed by having to report to the Under Secretary for Civilian Security, Democracy and Human Rights, which is among the hundreds of positions that have yet to be filled in the State Department since Trump became president.

As for the new index, Iceland takes the top spot for “best” performer, while Afghanistan and Syria are tied at the bottom. The US is No. 22 overall, ranking well on inclusion and justice metrics, but scoring more than 10 percent above the mean for developed countries on intimate partner violence, or 66th on the scale. The index captures the percentage of women who over their lifetime have experienced physical or sexual violence committed by their intimate partner. 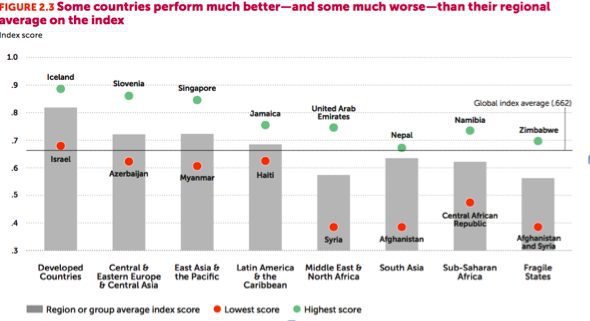 Intimate-partner violence in US society, the index says, “faces a unique crisis of lethal violence against women, given the intersections between domestic abuse and the widespread availability of firearms.”

Although not reflected in the US ranking, in a breakthrough for women’s rights advocates, Trump signed into law the Women, Peace and Security Act of 2017 on Oct. 6, ensuring that the US “promotes the meaningful participation of women in mediation and negotiation processes seeking to prevent, mitigate, or resolve violent conflict.” The law originated as a national action plan in 2011, enacted under an executive order signed by Obama.

As law, it will codify the US national action plan, yet it makes no mention of UN Security Council Resolution 1325, which was passed in 2000 to mandate women’s equal participation in peace negotiations and related activities across the globe. According to several professional women’s advocates in New York who asked for anonymity, the Trump law purposely voids any reference to Resolution 1325 in the text.

As part of more interest in the women, peace and security resolution, the Council on Foreign Relations just published an interactive site looking at women’s participation in peace processes.

In her interview with PassBlue, Verveer said that solidifying the US national action plan into law — especially with support from men and women of both the Republican and Democratic parties — was a vital step.

“I think it was really important for our Congress to go on the record,” Verveer said. “But as we learned with the national action plan during the Obama administration and the implementation of 1325 overall, it is not enough. We have many good laws. Many of those good laws are not implemented or enforced. This law is an important tool, but we have to use these tools to really advance the agenda.”

Where to look for inspiration on how to implement such laws is still open to debate. At the index’s launching at the UN, some attendees from governments and civil society criticized its ranking system, arguing that each country is unique and should assess its progress against its own past, not the current state of other countries.

But the index recognizes the usefulness of letting countries know which ones are scoring well or poorly, compared with a given region’s mean. According to Verveer, this comparison can prod important dialogues on laws and national action plans both among nations and within them.

“Our hope is not to create an index to have an index,” Verveer said. “Policymakers can look at this, then look in the situation in their own countries, and consider where they are challenged and what they can do to make a difference in those critical areas. But the index isn’t just for government officials. It’s the old Indonesian pancake: you need heat at the top in the form of political will, but you also need heat at the bottom from the grass roots.”

Even if national policymakers are not ardent in supporting women’s rights, the index can be used by civil society for evidence as to why improving women’s peace and security is in everyone’s best interest.

Moreover, the WPS index coincides with UN Secretary-General António Guterres’s prevention agenda by showing that intimate-partner violence is an indicator of conflict in a country. Developing countries in conflict have higher rates of domestic violence than nonconflict developing countries.

“We can prevent so much bad from happening if we use the conditions of women to be a guidepost for us,” Verveer said.