Americans Want an Active Role in the World, Contrary to Trump’s Actions, a Poll Finds

In the first week of November, more than 200 Americans who had been the beneficiaries of Fulbright international exchanges over many years went to the United States Congress to lobby members from across the country. They were asking their state representatives and senators not to strip the iconic, but now endangered, program of full financial support in the 2018 national budget.

Since 1946,when the Fulbright program was established by an act of Congress, more than 360,000 fellows from the US and abroad have been awarded grants to study, teach or conduct advanced research — now in 160 countries.

Yet while the White House budget writers and Congressional conservatives continue to target a wide range of educational and cultural programs for cuts — openly insisting that more money is needed for the military — Americans are saying they oppose closing these intellectual and other windows to the world.

A 2017 poll taken halfway through the first year of the Trump administration by the Chicago Council on Global Affairs sampled opinion across regional and political divides and found a noticeable resistance to a national policy of America First, if it means withdrawing from cooperation in major international agreements.

Often, the poll, titled “What Americans Think About America First,” found that there was more convergence than divergence among Democrats, Independents and Republicans than might be expected on most current issues. For example, a generalized question asking if it is best (or not) for the future of the country if it takes an active part in world affairs, an overall average of 63 percent of respondents said the US should remain engaged, though this average is lower than similar polls found since 1990.

“Despite the politically charged environment over the past year, Americans express remarkably enduring support for an active US role in world affairs, for security alliances, and for trade relationships,” the poll’s editors concluded.

“They also favor offering illegal immigrants an opportunity to earn citizenship, either immediately or with conditions — a fact often overlooked by political leaders. Even though a portion of Americans have some questions about how much the United States gets out of security alliances and trade agreements, the American public as a whole seems to recognize clear value in maintaining them.”

The divergence among Democrats, Republicans and Independents in this 2017 poll was greatest on some aspects of immigration and on climate change and the Paris Agreement, from which Trump withdrew US support over the objections of some members of his administration, including Secretary of State Rex Tillerson.

By political breakdown, the report concludes: “On both climate change and immigration, Trump’s America First policies are giving his base and many in his party what they want. These policies, however, run counter to the views of the overall American public.” 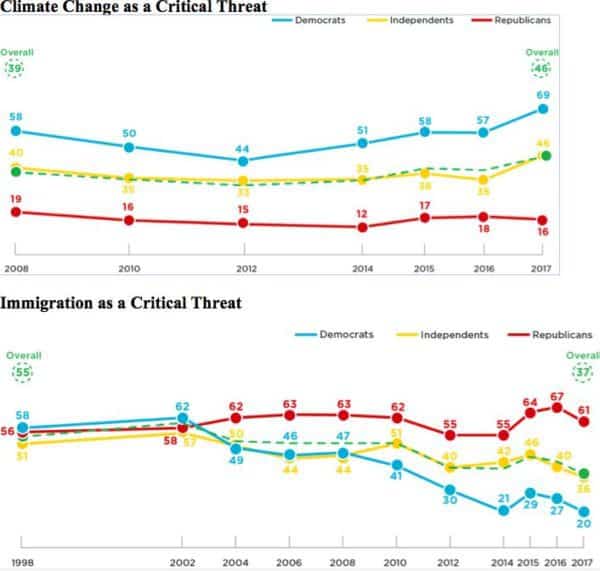 Lancet Report: Health Effects of Climate Change May Be Irreversible

Specialists in numerous disciplines from every continent working in collaboration have concluded that human symptoms of climate change are unequivocal and that damage to health globally may be irreversible. Their findings were published on Oct. 30 in Lancet Countdown 2017. (The report is free but requires basic registration to access.)

On the dangers of heat waves alone, experts reported that between 2000 and 2016, the number of people exposed to extreme heat increased by 125 million globally, reaching a record 175 million by 2015.

In the long term, nutrition and mental health can deteriorate, the study said, and pre-existing heart conditions worsen. Geography and patterns of human settlement play a part.

“The increase in exposure relative to the global average is driven in part by growing population densities in India, parts of China, and sub-Saharan Africa,” the report said, adding: “Accounting for population when assessing temperature change provides a vital insight into how human well being is likely to be affected by temperature change. . . . “

Government responses have been too slow, the experts warn, saying that 25 years of delay in confronting the health dangers of climate change is already affecting global life and livelihoods.

“If governments and the global health community do not learn from the past experience of HIV/AIDS and the recent outbreaks of Ebola and Zika viruses,” the report concludes, “another slow response will result in an irreversible and unacceptable cost to human health.”