As Sweden and Canada Push a ‘Feminist Foreign Policy,’ Others Resist the Label

After years of civil war, Somalia is beginning to build democratic institutions with support from the West, even as horrific violence repeatedly strikes the capital, Mogadishu. Help from foreign countries and regional groups — such as the European Union, Italy and the United States — was provided in Somalia’s 2016 election, where electoral processes and security were great concerns.

Sweden, which was also involved, had one issue in mind: making sure women got 30 percent of the seats in Parliament.

Despite resistance from Somali elders, a historic high of 24 percent of seats were allocated to women in the election. The Swedish ambassador to Somalia at the time was one of the prominent people “who was advocating for the realization of this goal,” Sagal Bihi, a newly elected female parliamentarian, said in a phone interview with PassBlue.

Somalia is one example of how Sweden’s feminist foreign policy can work on the ground — on specific goals — in places as varied as Somalia, Syria and Colombia. In 2014, Sweden’s first feminist government and its outspoken foreign affairs minister, Margot Wallstrom, decided that the country would include a feminist perspective in all its foreign policy decisions to ensure human rights are upheld for men and women across the world. The goal included policies in international aid but also other unlikely sectors, like trade and foreign property.

Canada has followed suit, using the phrase “feminist foreign policy” in promoting its agenda. But if other countries were inspired by Stockholm’s high-profile advocacy on the matter, many other countries are reluctant to use the loaded “F-word,” feminist, to describe such policies.

Silja Bara Omarsdottir, a professor of political science at the University of Iceland, thinks that labeling a foreign policy as “feminist,” rather than talking about gender equality creates a more impactful conversation about power structure.

In the United States, the world’s most powerful country, Secretary of State Rex Tillerson has referred passingly to the need to promote women and girls in all spheres of life, without taking that step too far — unlike a predecessor, Hillary Clinton, who consistently emphasized gender equality in her diplomacy. That focus included efforts by Clinton and other people to create a new entity for women at the United Nations: ultimately, UN Women.

As an indication of the US State Department’s minimal support of gender equality, it has not filled the ambassador of women’s issues post, possibly because the choice could become contentious between Tillerson and the White House. The office, created by the Obama administration, is run by an acting director, Rahima Kandahar.

Sweden has been a prominent feminist advocate internationally for years, but announcing its agenda was ground-breaking. So much so that Wallstrom was awarded the Agent for Change prize by the UN for her advocacy for women, peace and security. (Wallstrom was named the first UN envoy for sexual violence in conflict in 2010, an office created under Ban Ki-moon, the secretary-general at the time.)

For Ann Bernes, the Swedish ambassador for gender equality, feminism and diplomacy go hand in hand.

“This policy should be easy to do, hard to avoid,” she said in a phone interview. Yet Wallstrom’s first steps in carrying out her policy did not go smoothly. Nevertheless, other politicians jumped on the bandwagon. Justin Trudeau got elected in 2015 on a feminist platform in Canada, and the government now calls its own foreign policy “feminist.”

After a yearlong consultation with thousands of people and governments, including Sweden, Canada started its own Feminist International Assistance Policy last summer. It aims to empower girls through peacekeeping efforts, among other ways. In November, Chrystia Freeland, Canada’s foreign affairs minister, announced that Canada would send more female soldiers to conflict zones, saying “feminist foreign policy is needed now more than ever.”

According to Bernes, more countries, like Britain, are also expressing interest in the policy. Britain recently named a woman, Karen Pierce, as its first female ambassador to the UN. Yet Boris Johnson, the foreign minister, has hardly uttered a feminist viewpoint in his work.

One example of a country avoiding the “feminist” label while saying it is doing the work is Lithuania, whose prime minister is Dalia Grybauskaite, who has been in power since 2009.

In an interview with Audra Plepyte, Lithuania’s ambassador to the UN, she said that her country cooperated with and was inspired by Sweden’s feminist foreign policy, but it does not see a need to give a name to what the government has been doing for years.

“For us it doesn’t matter how you call it,” Plepyte said. “What is important is our targets and the results.”

An Eastern European diplomat who represents her country at the UN said the word “feminist” is dated, adding that “gender equality” is more modern.

In 2016, Australia launched a “gender equality and women’s empowerment strategy” that “pursues the empowerment of women as a top priority.” But the foreign minister, Julie Bishop, never mentioned the word  “feminist” in her speech announcing the policy nor was it included in Australia’s 2017 foreign policy white paper.

Australia’s close neighbor, New Zealand, elected an openly feminist prime minister in October, and 38.4 percent of seats in Parliament are held by women. A spokesperson for the Ministry of Foreign Affairs and Trade declined an interview with PassBlue about the country’s feminist foreign policies but reasserted its commitment to the Convention on the Elimination of All Forms of Discrimination Against Women (Cedaw), the Beijing Declaration and women’s rights at home.

For example, the diplomat said that Cedaw and UN Security Council Resolution 1325, a landmark decision that mandates equal participation of women at peace talks, were used in “foreign policy redesign” in such countries as Chile. As a result, more women there have become government ministers and joined the armed forces.

In addition, female presidents, prime ministers and foreign affairs ministers in the Grulac region “have also been pivotal in this shift in foreign policy reinforcing gender mainstreaming,” the diplomat said. She noted that a Swedish neighbor, Finland, is another proponent of gender equality domestically and overseas.

In Sweden, Wallstrom’s foreign policy has been criticized as conducting more advocacy than diplomacy. Since Sweden adopted its feminist foreign program, Wallstrom ignited diplomatic tensions with Saudi Arabia, after she said the country’s treatment of a blogger, Raif Badawi, was “medieval.” Saudi Arabia recalled its ambassador in Stockholm for a few weeks in response to Wallstrom’s statement.

For Omarsdottir in Iceland, the backlash in Sweden after Wallstrom’s dispute with Saudi Arabia shows there is still a long way to go.

“Even if you have one of the most influential feminist actors in the international system, there are problems with implementation,” Omarsdottir said.

Iceland, another Nordic country, is the first nation in the world to have democratically elected a woman for president, in 1980. (Sri Lanka is the first to have elected a female prime minister, in 1960.) Iceland is now considered the world’s most gender-parity country, although feminists there may scoff at that assessment, as some did at the UN’s annual women’s meeting last March.

Omarsdottir thinks that the rise of what she calls “femocrats” — women working on gender topics in the foreign affairs ministry — brought a considerable shift to Iceland, although the country does not officially call its foreign policy “feminist.”

In both Canada and Sweden, carrying out such a policy has meant changing diplomacy. At the early stages, Bernes said she recalled how her colleagues went from “whoops” to “wow” as many did not fully understand the policy’s meaning.

“A lot of it is figuring out how to do things differently from how it’s been done for decades,” said Diana Sarosi, a policy manager at Oxfam Canada. Sweden did not only provide support to Canada to elaborate its own policy but it also advises other countries in specific legislation. Sweden and Canada have been sharing good practices for the last few years, as Sweden does with such countries as England and Lithuania.

In Canada, however, its business relationship with Saudi Arabia — which is generally deemed by outsiders as a bastion of conservativism in its treatment of women — is a lasting thorn in the flesh of Ottawa’s feminist agenda. Like many large Western powers, Canada also sells weapons to the Saudis, which is controversial in Canada. Sweden is a large exporter of weapons as well.

In this regard, Sarosi of Oxfam Canada thinks it would be beneficial for the Canadian government to have a more consistent policy, saying: “You can’t pick and choose where you want to be a feminist. It also has to come with arm trades.”

Sweden passed a bill in 2017 to limit arm exports to nondemocratic countries. Le Devoir, a Montreal newspaper, also announced that the government suspended arms exports to Saudi Arabia last summer, after it was revealed that the Saudis might have used Canadian armored vehicles against civilians in its war in Yemen. Canada attracted further criticism for selling combat helicopters to the Philippines, despite President Rodrigo Duterte’s abysmal human-rights record.

Sweden’s next parliamentary election is set for the fall, and the possibility of a change in government brings uncertainty around the future of its feminist foreign policy. Bernes, however, thinks the cultural change in Sweden is now entrenched in its institutions.

“Many colleagues have come to realize that 1+1 equals 3 when it comes to include a feminist perspective, and that’s a powerful tool for making it stick,” she said.

[This article was updated.]

As Sweden and Canada Push a ‘Feminist Foreign Policy,’ Others Resist the Label 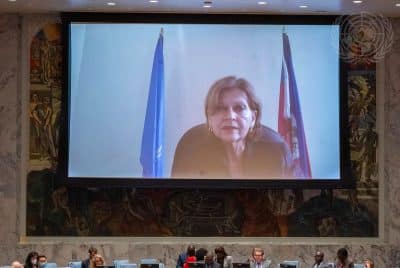