Nikki Haley’s Trip to Central America: Moving Closer to US Friends but Not on Migration

Guatemala and Honduras were two of the nine countries that Nikki Haley invited to her “friends of the US” party in January for casting a no vote on a United Nations resolution negating the decision by President Trump to move the American embassy to Jerusalem. (The resolution was passed overwhelmingly, but countries that abstained from the vote or who didn’t show up to vote were also invited to the party.)

Guatemala and Honduras were also picked as Haley’s destination for her first trip to Central America as the United States envoy to the UN “to underscore the United States’ strong ties and partnership with those countries,” a statement from her office said. While Haley was there from Feb. 26 to March 1, she met with the Honduran and Guatemalan government leaders and others to discuss the US partnership in “anti-corruption and counternarcotic efforts,” according to her press release.

After Haley left Central America, she stopped off in Miami, where an anti-Cuban base thrives, and said at a university panel discussion, “I just came back from a trip to Honduras and Guatemala, this is the year of the Americas and so we’re gonna see the United States put a lot of emphasis on our relationship with those countries, how we can strengthen them.” (Trump has announced he is traveling to Colombia and Peru and Haley’s trip followed the former US secretary of state’s trip to Mexico, Argentina, Peru and Colombia.)

Haley’s trip to two of the poorest and most murderous countries in Central America produced a mix of aid announcement, reinforcement of security cooperation and possible gains for US Republican policies on the region. Guatemala and Honduras are two of three countries in the Northern Triangle, situated on the frontline of Trump’s policies to curb immigration to the US; the other country, El Salvador, was not on Haley’s itinerary. Coincidentally, El Salvador was a no-show for the vote on the UN General Assembly resolution in December.

As the US mission to the UN did not publish a formal statement after Haley’s trip and information about her specific meetings, this summary of her visit to Central America is based on information available from her social media accounts and other reports. The US did not follow up on PassBlue’s request for information regarding the cost of the trip.

In Guatemala City, the capital, Haley met with President Jimmy Morales to talk about curbing immigration to the US. Morales, who built a lucrative career as a TV evangelist, is also an ally in the Trump administration’s fight against Venezuela President Nicolas Máduro. He has been condemned by the US and other Western bodies for undermining his country’s democracy and other rule of law violations.

If Haley and Morales agreed to work together on drug traffickers, corruption and the crisis in Venezuela, one large point of contention remains: the role of the Cicig, or the International Commission Against Impunity in Guatemala. Cicig was created by the UN and Guatemala in 2006 as an independent body to investigate and prosecute serious crimes in the country after its 36 years of civil war and to strengthen the country’s state institutions. 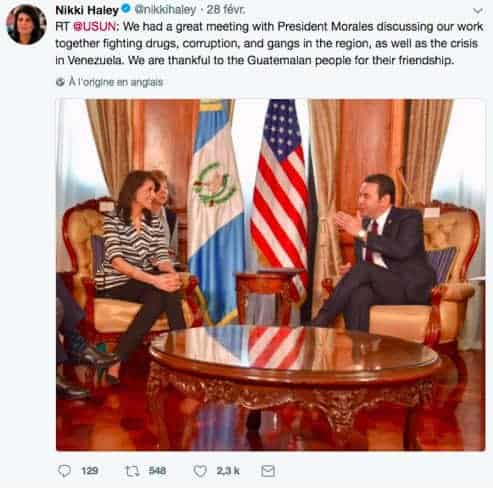 Tensions arose last summer when Cicig’s commissioner, Iván Velásquez, a Colombian lawyer, opened an investigation of corruption against President Morales and to strip him from his immunity. Morales was being investigated for failing to account for $800,000 in campaign financing. As a result, Morales declared Velásquez persona non grata in Guatemala, but his move was immediately overturned.

When Morales tried to push out Velásquez, Haley said that the commissioner “has the full support of the United States and the international community.” The US finances about a third of Cicig’s budget.

In Guatemala, Haley told Reuters after her encounter with Morales that she said to him that “it was in his best interest” to keep backing the body. A press release issued by the American embassy in Guatemala pointed out that “continued commitment to fight corruption is a key component of the relationship between the United States and Guatemala.”

Adriana Beltrán, the director for citizen security at the Washington Office on Latin America, or WOLA, an advocacy group, said that Guatemala’s no vote on the UN resolution in December was done to get Trump’s attention “and favor with their attempt to remove commissioner Velásquez and weaken the work of Cicig.” But that did not seem to happen.

One topic that brought Haley and Morales together was Guatemala’s no vote on the UN resolution. Haley thanked Morales for that and his announcement to move Guatemala’s embassy to Jerusalem. A few days after Haley left Guatemala City, Morales spoke at Aipac, the American Israel Political Action Committee (see video above), and reiterated his country’s desire to not only move its own embassy to Jerusalem but also to set up a timeline for it: two days after the White House relocates its embassy from Tel Aviv to Jerusalem. Haley said of the decision, “God bless Guatemala.”

Haley attended the same event, on March 4, where she discussed her trip to Central America before 18,000 Aipac members. Haley declared a clear link between the countries she visited and the UN vote, saying she and Trump wanted to “draw a closer connection to US foreign aid and how countries vote at the UN.” In Guatemala, Haley had visited a shelter for female victims of human trafficking and abuse, announcing a donation of $2.2 million for the charity.

What does the direct reward of money for UN votes imply for the US?

“The US was pleased with their decision, and at some level, this was a decision by the US to express the appreciation for the Guatemalan and Honduras vote,” said Eric Olson, a senior adviser with the Mexico Institute of the Woodrow Wilson International Center for Scholars, a research group in Washington, D.C.

In Honduras, Haley’s stance on corruption was much less clear than in Guatemala, as the re-election in November of the conservative candidate, Juan Orlando Hernández, is still contested by the opposition and was seriously questioned by the Organization of American States, or OAS, the regional group that helped monitor the voting. Haley’s position on this issue was to encourage Hernández to meet with the opposition to “discuss differences.”

The problem wasn’t ignored by Hondurans. Haley’s visit to the American embassy in Tegucigalpa, the capital, sparked unrest and led to multiple arrests.

“The United States is backing a dictatorship in Honduras,” Manuel Zelaya, a former president from 2006 to 2009 who was overthrown by a coup that the US condoned under President Obama, told Reuters.

Beltran from WOLA said she found Haley’s commitment to Hernández troubling “at a time when you have highly contested elections, and lots of issues related to the constitutionality of the vote,” she said in a phone interview.

She referred to a report released on March 12 by the UN Office of the High Commissioner for Human Rights documenting violence perpetrated by government security forces against protesters and civilians after the November elections, as well as mass arrests. The document concludes: “The State’s response to the post-electoral protests led to serious human rights violations.”

Salvador Nasralla, the opposition leader who lost to Hernández, contends the elections were fraudulent. The US recognized Hernández as the legitimate winner only a few days before Honduras voted no on the UN resolution. The OAS called for a new election.

Haley also met with representatives from the Mission to Support the Fight Against Corruption and Impunity in Honduras, a body similar to Cicig and in political turmoil after it questioned alleged frauds in the 2017 elections that re-elected Hernández. The body, which is led by the OAS and backed by the UN, the US, Canada and Europe, picked a new leader in mid-February after “rising hostility from the Honduran government as well as a lack of support from its parent organization, the OAS.”

On migration, the newspaper La Prensa reported that Hernández asked Haley to extend the Temporary Protected Status for about 57,000 Hondurans living in America. Haley reportedly said, “It is important for the US to stop migration, but it is also important to help the Honduran government to do this.”

In 2015, the latest year for which data is available, as many as 3.4 million people born in the Northern Triangle were living in the US, more than double the estimated 1.5 million people in 2000. About 55 percent of the people were undocumented. 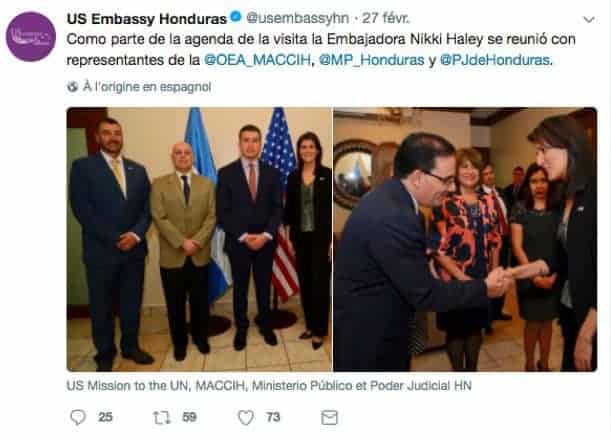 Under Trump, anti-immigration orders and tightened border security have led to a drop in attempted border crossings into the US from Mexico, a main path for immigrants trying to enter from the Northern Triangle. Trump has also authorized the deportation of undocumented immigrants, including separating minors from their parents, in the US. He has left another immigration policy, the Deferred Action for Childhood Arrivals (DACA), in limbo.

According to a statement from WOLA, “being denied refugee status or being deported can be a death sentence, as one of the key factors driving large numbers of Central Americans to leave their communities is violence.”

For Olson of the Wilson Center, Haley’s trip to Honduras aligned with Trump’s foreign policy goals on immigration, saying, “The Trump administration has made very clear their primary objective in Northern Triangle is to address the drivers of migration, and to slow migration to the US by focusing on economic, security and governance.”

Olson deplored, however, that neither the US embassy in Honduras nor the US mission to the UN issued a press release after Haley’s visit to the country.

Hernández said he has not decided whether the country will move its embassy to Jerusalem.

Nikki Haley’s Trip to Central America: Moving Closer to US Friends but Not on Migration