So Who Is Lying: Iran, Israel or Trump?

The world will soon know the future of the Iran nuclear deal, when President Trump plans to announce his intentions on May 8 at 2 p.m., Eastern Daylight Time, from the White House. 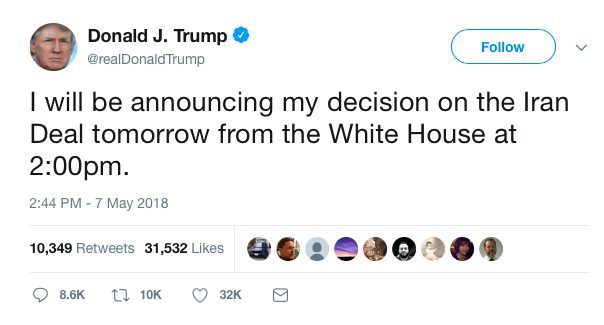 The decision follows intense jostling among high-powered countries, current and former government officials and seasoned disarmament people in the last several months to either finally preserve or kill the deal, called the Joint Comprehensive Plan of Action, or JCPOA.

Most recently, Israel, which is not a party to the deal, unveiled its own public campaign to persuade Trump to pull the plug once and for all, an ominous game plan that could have fatal repercussions for the region and far beyond.

Last week, Israel revealed a “secret nuclear archive” of 55,000 printed pages and 183 compact discs that the congenital hyperbolist Benjamin Netanyahu presented to a global television audience to prove that Iran “is brazenly lying.” But Iran has not said, as Netanyahu alleged, “it never had a nuclear weapons program.”

The files that Netanyahu’s spies stole from an unsecured Tehran warehouse have merely reaffirmed the importance of the United Nations’ job as monitor of the denuclearization of Iran’s military operations.

If Prime Minister Netanyahu’s nuclear razzle dazzle and vilification of Iran was not fully convincing, his actions helped to disclose his far more sinister game plan: itching for a fight with Iran to throw a last-minute wrench into European, Russian and Chinese efforts to keep the Iran nuclear deal alive.

To accomplish Netanyahu’s objective, he also had the Knesset confer warmaking authority for “extreme situations” from his cabinet to himself and his minister of defense. Even more alarming, in the past weeks he unleashed Air Force bombings and 200 ground missiles against Syrian targets, killing and wounding dozens of Iranian combatants but never admitting that these were Israeli attacks.

Netanyahu’s calculations are clear: provoking an Iranian counterstrike against Israel would deliver visible evidence of Iran’s supposed belligerence and danger to international security as well as the unworthiness of continuing the JCPOA.

Stealing information from Iran to attempt to gain evidence — however minor technical infractions of the JCPOA it may prove — is actually not a legitimate process under Resolution 2231, which blessed the nuclear deal in 2015 by the UN Security Council. International law also does not allow the secret killing of Iranian soldiers under the right to self-defense dogma, as long as Israel cannot prove that the soldiers were about to attack Israel.

No wonder that Israelis across the world fear that, according to the Israeli newspaper Haaretz, Netanyahu has their country standing “on the brink of an abyss, and [Netanyahu] is leading us one step forward.” He certainly must accept responsibility for Israel’s sudden withdrawal on May 4 of its candidacy for an elected seat on the UN Security Council, which was necessitated, according to media reports and several ambassadors at the UN who spoke to PassBlue, because of Israel’s few chances of winning.

The opposition by conservative Israelis and their US counterparts to the JCPOA suffers from credibility and procedural problems. Their core argument, that Iran is violating the agreement, is unfounded, and by ignoring Articles 10 to 13 of Resolution 2231, they miss out on the proscribed pathway for triggering the “snap-back” provision embedded in the deal. These oversights are critical failures, given that the Security Council resolution offered clear methods on how a national participant to the deal must address “significant non-performance of commitments under the JCPOA.”

So far, despite the tossed-salad accusations that Trump keeps serving to the international community since he assumed the US presidency, his UN ambassador, Nikki Haley, has never applied concerns under Articles 10 to 13, thus violating the resolution’s requirements.

Meanwhile, Brian Hook — Trump’s point man in the US State Department on the JCPOA — is negotiating with his European counterparts on supplemental deals that are focused on targeting additional sanctions against elite members of the Islamic Revolutionary Guard Corps (IRGC), which controls Iran’s ballistic missile program. The Europeans and Hook are also focusing on Hezbollah and IRGC leaders who are backing regional interventionism in Syria, Yemen, Lebanon and Iraq.

As the nuclear deal stands, some caveats could trigger rejections from Trump and from European countries that are not inclined to concede any points on the JCPOA. In order for all 28 European member countries to support any new Iran agreements with the US, the Trump administration must make an unequivocal commitment to continue the deal. The Europeans, on the other hand, will be required to agree on guarantees that keep Iran’s so-called breakout period — the time Iran needs to build a nuclear weapon — to a minimum of 12 months.

The breakout provision is somewhat oxymoronic because the underlying issue is covered in the deal. The agreement is intended to lead Iran to a nuclear-weapons-free future, verifiable first through Iran’s compliance with the Non-Proliferation Treaty and, secondly, with the stringent Additional Protocol, which ensures unrestricted inspections by the UN’s International Atomic Energy Agency. The protocol enables the agency’s inspectors access to all parts of the nuclear fuel cycle; to short-notice examinations of all nuclear sites, including military installations; and to collect samples. Regardless of the verification method, Iran has committed to use nuclear power only for legitimate civilian purposes.

Apparently, the Trump administration does not trust the protocol’s usefulness, which previous US administrations had helped to develop and implement. Perhaps all 28 European Union member nations can be convinced to give the US what it already has — provisions to ensure that Iran will never develop nuclear weapons — in exchange for leaving the JCPOA untouched.

But the bigger question remains: will Iran swallow the insults built into the nonsensical sunset guarantees, after having faced Israeli military provocations, illegal raids by Netanyahu’s spies and America’s dodging of its treaty obligations?

On top of these political pains, Iran has been absorbing the economic effect of Trump’s brinkmanship. Since he mounted his JCPOA attacks in 2016, the Iranian rial has lost a third of its value, compared with leading Western currencies. In 2016, approximately 32,000 rial bought one euro, whereas Iranians now must pay 52,000 rial. Not even Iran’s oil supplies to China, India, South Korea and Japan — totaling roughly $25 billion in income — help. In fact, while Iran was under UN sanctions, its oil sales resulted in much higher revenue, as the oil was far more expensive then.

Equally important, Trump’s maneuvers on the nuclear deal are hurting the West’s best hope that the moderate Iranian president, Hassan Rouhani, and his government will prevail against the strengthening radical wing of the IRGC. Pervasive unemployment and 3.44 percent economic growth that does “not stand any chance of improving the financial well-being of Iranian households” have hurt the strong popular support that enabled Rouhani’s re-election one year ago.

Inevitably, Iran is being pressed into stronger political, economic and security ties with China, Russia and probably India. Obviously not unhappy about the strengthening relationship with one of the world’s biggest oil suppliers, the Chinese foreign ministry spokeswoman, Hua Chunying, has reacted so far to Trump’s ignoring the UN’s watchdog role in the Iran deal with a mild and indirect reprimand, saying last week, “China reiterates all should stick to Iran nuclear deal.”

As a possible future denuclearization agreement with North Korea hovers over the waffling on the Iran deal, further destabilization of the JCPOA by the US presents serious implications. A generally congratulatory editorial in the China Daily nevertheless warned participants to the inter-Korean and US-North Korean talks that “considering the past flip-flops on the matter, any denuclearization agreement will require a mutually agreed road map and timetable for both sides to honor their commitments if it is to be both credible and workable.”

We welcome your thoughts on our P5 Monitor column, looking at the behavior of the Security Council’s permanent five members, Britain, China, France, Russia and the United States. Please send your comments  to passblue1@gmail.com or write them in the section below.

Enrico Carisch is the co-author of the just-released book “The Evolution of UN Sanctions: From a Tool of Warfare to a Tool of Peace, Security and Human Rights.” He is also a co-founder and partner of Compliance and Capacity Skills International (CCSI), a New York-based group specializing in all aspects of sanctions regimes (http://comcapint.com).

Among other organizations, Carisch has worked for the UN Security Council as a financial and natural-resources monitor and investigator on sanctions violations by individuals and entities in Africa and elsewhere. Previously, he was an investigative journalist for print and TV for 25 years.

1 thought on “So Who Is Lying: Iran, Israel or Trump?”

A First in Canada: The New Governor-General Is an Inuit