Oh, Yes, France Is a Permanent Member of the UN Security Council Too

The last few weeks have been rough for Nikki Haley, the ambassador of the United States to the United Nations. On June 1, she led the US delegation in submitting a draft Security Council resolution condemning the militant group Hamas for its perceived role in inciting violence by Gazans against Israel.

Only the US voted for it, which may be a first for an American-led resolution in the digitally recorded history of the UN. Three countries — Bolivia, Kuwait and Russia — voted against it. Eleven countries — Britain, China, Equatorial Guinea, Ethiopia, France, Ivory Coast, Kazakhstan, Netherlands, Peru, Poland and Sweden — abstained. On the same day, Haley cast the lone US veto of a widely accepted Kuwaiti-proposed Security Council resolution for a UN protection zone for Gazans, killing the possibility.

Additionally, while speaking at the University of Houston on May 22, Haley forgot that France — like Britain, China, Russia and the US — is a permanent member of the Security Council (about 25:00 in the video). During the speech, she was heckled by protesters lamenting her position on the Israel-Palestine conflict with chants of “Nikki, Nikki, can’t you see? You are on a killing spree!” and “Haley, Haley, you can’t hide, you sign off on genocide.”

Whether you agree with her policies or not, Haley has conquered a high learning curve in her year and a half at the UN, and she has developed the ability to pivot seamlessly. A glance at her musings on her Twitter feed shows she has a lot going on, including thoughts devoted to friends, family, music and other personal details, in addition to condemning the governments of Nicaragua and Venezuela.

Here is a noninclusive, made-up list of what might be on Haley’s mind as President Trump is Making America Great Again: 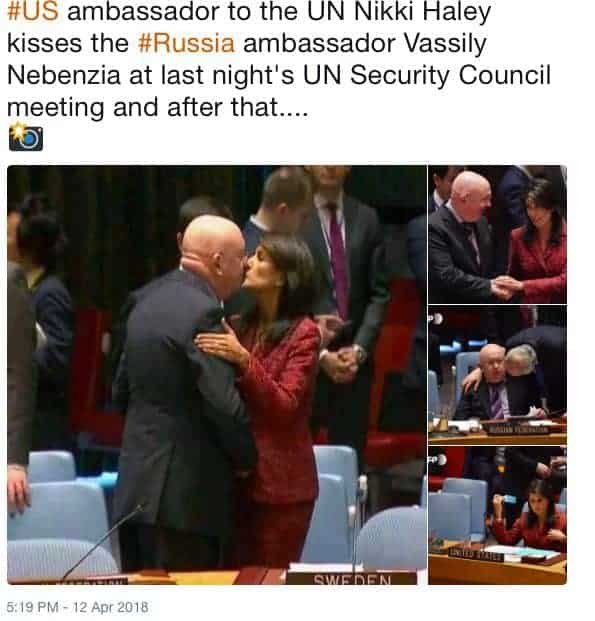 • Why won’t Madeleine Albright return my calls, or wear that friendship bracelet I gave her?
• South Carolina has never really respected the UN. I wonder why?
• Is Bolton’s mustache growing as we speak or is that his lunch? No, don’t look! Wait, is that Tillerson’s shoe?
• If only Condoleezza Rice truly appreciated college sports, then I’m sure we’d talk more often. Go Gamecocks! More WINNING!
• I’ve got to start biting the other cheek, my dentist says he can’t put any more stitches in this one.
• I wonder if I can get some Novocain to go?
• Why does Bentley disdain the UN neighborhood?

• Will Bentley like D.C. better? Will Donald notice that my chief of staff, David Glaccum, is moving to D.C.?
• Why does Sarah Huckabee Sanders get to sit in on high-level meetings? Ouachita Baptist University isn’t even D1. But I do love that smoky lie; I mean, eye.
• If I bought Donald a new tie and included instructions, will it work? He has to shorten the tie, it only accentuates his hips the way he ties it now.
• I can’t believe Javanka got full security clearance. It’s not like they have any foreign policy or international relations experience.

But don’t worry, Ambassador Haley, we have it on good authority that “it’s a new day at the UN” and “there’s a new sheriff in town.” Hopefully, July will be better than May and June.