Bolivia’s Priority in the UN Security Council: Why Conflicts Begin

Welcome back to our monthly column, Security Council Presidency, providing insight into the United Nations Security Council member sitting in the rotating seat of the presidency every month and featuring a capsule of the country itself.

The column began in July, when Sweden was president, led by the country’s ambassador to the UN, Olof Skoog. We interviewed Karen Pierce, the British ambassador, for August.

With original reporting from South Carolina and other sources, we profiled Nikki Haley for the United States presidency, last month. (She declined to be interviewed.) After an extremely busy time for Washington in presiding over the Security Council in September, amid the opening session of the General Assembly, we now turn to Latin America, as Bolivia takes the helm for October.

As the country finishes its two-year Council term in December, we interviewed Bolivia’s ambassador to the UN, Sacha Llorenty Soliz, to discuss his achievements as well as his relationship with the Trump administration. (He also talked about Bolivian food in New York City.) Bolivia’s presidency begins with a Council trip to the Democratic Republic of Congo, from Oct. 5 to 7.

Sitting next to President Trump during a Sept. 26 Security Council meeting on nonproliferation, Bolivian President Evo Morales did not hide his disdain toward America’s foreign policy, saying: “In no way is the U.S. interested in spreading democracy. The United States could not care less about human rights or justice.”

With Bolivia’s last major act in the Security Council now, this month’s presidency is likely to be as distinct and unequivocal as the country’s voice has been for nearly the last two years in the chamber, among the 15 members. The interview has been edited and condensed.

Ambassador to UN since: September 2012

His story, briefly: Llorenty, 42, was born in Cochabamba, the fourth-largest city in Bolivia, high in the Andes. Llorenty, who has two sisters and a brother, went to a Roman Catholic school. Before he joined the government, he was an academic and a human-rights activist: in 2005, he was dean of the faculty of social and humanistic sciences at the University of Aquino Bolivia. He became minister for government in 2010, having previously been deputy minister for Coordination With Social Movements and Civil Society, from 2007 to 2010. He was appointed ambassador to the UN in 2012, and has been living between La Paz, the capital, and New York City since then. He is also representing Bolivia in the country’s maritime claim against Chile in the International Court of Justice in The Hague. (On Oct. 1, the court decided against Bolivia, a landlocked country, saying that Chile was not obligated to negotiate with Bolivia regarding sea access.)

What have been your career highlights so far? “September 16 marks my sixth year as UN ambassador. In my past life, I was an activist, so when Morales became president, I got involved in one of the most revolutionary moments in my country — as he is the first indigenous person to become president of Bolivia. It changed how politics was done but also brought structural changes. I’m partly indigenous. I worked as a vice-minister of the presidency for three years; after that I was a minister — for me it was a learning experience. I’m not a career diplomat, so I had to learn how to engage myself in the UN system. I chaired the Group of 77 in 2014, one of the highlights of my career. I also chaired a UN special committee on debt restructure processes in 2015.”

How do you like life in New York? “It’s a beautiful city. Wherever you go — it’s an exciting city, I really enjoy my time here. Of course, I miss home all the time, but whenever I’m a few weeks away from New York, I start to miss it. It’s been six years, so sooner or later, I’ll be heading home.”

What do you miss the most about Bolivia? “Everything! It’s a very special country — as every country is — but of course it’s most special to me. Bolivia is very diverse in terms of its geography. You can go up to my city, La Paz, which is 3,600 meters above sea level — you’ll be in the mountains there, there’ll be snow at the peak of mountain all year round and it’s beautiful. You can also go down to the jungle and the Amazon. In 45 minutes, you can go from La Paz to the jungle. It’s also very diverse in terms of its people. We have 36 indigenous nations, and it’s a culturally mixed country with strong traditions.

“I miss the people, the food, the relationships — for me it’s not easy to be away from the country while it’s facing this dramatic transformation. It was one of the poorest countries in the region. Just to give you a couple of figures: 40 percent of the population was extremely poor, they made less than $2.50 a day. When Morales became president, he made structural transformation, now we’re planning to eradicate poverty by 2025, reduce child mortality, increase participation of women. Bolivia is the second country with the most women in the parliament in the world — and it has to do with political leadership.” [According to the Inter-Parliamentary Union, Bolivia is third, after Rwanda and Cuba.]

Have you found any good Bolivian restaurants in New York City? “Not really, there are two but I wouldn’t recommend them! There is one, called Bolivian Llama Party, in Columbus Circle, which is nice. It’s a small business, but it has the best salteñas, they’re like empanadas, but Bolivian ones. That’s the only I would recommend; another one is run by an Ecuadorean, so it’s not really recommendable!”

What are the priorities of your Security Council presidency? “We presided over the UN Security Council in June last year and we’ve learned from our mistakes: we will not put as many things on the table. It’s going to be a very busy month. We’re going to start with a visit to the Democratic Republic of Congo the first week, then we’ll have a meeting on Colombia; we’ll have a debate on women peace and security, which is a yearly debate and a very important issue. Also, the issue on the situation in Western Sahara; we will have South Sudan as well.
We have the open debate on the Middle East and Palestinian issue, for us it’s always a priority. We’ll have a meeting with the ICJ [International Court of Justice] and we’re planning to do a signature event. I cannot tell you the theme yet because we’re still working on it, but what we want to tackle are the root causes of conflict. In the Council, we’re usually good at discussing conflicts and making a diagnosis of the situation, but we don’t usually talk about the real causes of conflict. Since we are almost finishing our term as an elected member, we want to do something that we consider relevant.” 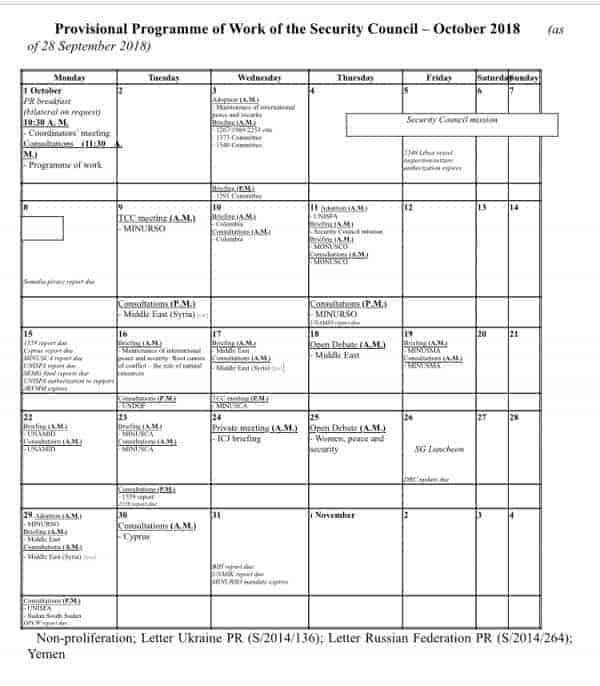 What do you want people to remember about Bolivia’s role in the Security Council as it winds down? “It was a very special experience. We’ve been in the Council two times before, but the last one was 40 years ago [1978-79], and in different circumstances. We were in the Council in the framework of the Cold War, so we weren’t doing very much, now it’s different. The advantage for me is that we really have a sovereign foreign policy. We speak our mind, sometimes it gets us into trouble but we don’t mind; we’ve spoken on issues related to our principle. We don’t depend on no one. We’re doing very good in our economy, we’re the fastest growing economy in the region. What we’ve tried to do is defend multilateralism, uphold the principles of the UN Charter; and we’re very vocal against unilateral actions, issues such as Palestine, Colombia. Now, multilateralism is under threat. With the US being such an important player in the international community — in economy and military — it’s really the US which has put multilateralism at risk.

“For example, the decision to withdraw from the Paris accord on climate change, the withdrawal on the negotiations on the global pact on migration, also the fact that they [US] unilaterally decided to place their embassy in Jerusalem, which caused great distress in the region. . . . This is a very risky time for multilateralism, and we’ll continue to keep working to defend our rules-based system and to make sure our sovereignty is respected. We should all have a common ground of understanding.”

Bolivia’s Priority in the UN Security Council: Why Conflicts Begin