The UK Flip-Flops on Gender Wording in UN Disarmament Discussions

Negotiations in the United Nations General Assembly’s First Committee, which concentrates on disarmament, caused a Twitter row late last week after wording on gender stirred up strong feelings between powerful nongovernmental organizations and Britain, surprising other countries as well.

The committee’s informal consultations, as they are technically called, are currently focusing on updating an array on official disarmament documents, including the Arms Trade Treaty and the Program of Action to Prevent, Combat and Eradicate the Illicit Trade in Small Arms and Light Weapons in All Its Aspects. The committee is also drafting an annual resolution on conventional weapons.

The language causing the flap addressed the gendered impact of weapons and conflict. It remains unclear why Britain asked for — then retreated from —  its proposed language change, as an official response was not offered.

In one case in the committee, for example, according to several sources privy to the consultations, Britain asked that “gendered impact of unregulated and illicit arms flows” be replaced with “negative impact,” dropping language specifically on gender-based violence and its consequences.

Some nongovernmental organizations dedicated to disarmament theorize that Britain is trying to move away from “gendered impact” wording to avoid the appearance that it supports the Treaty on the Prohibition on Nuclear Weapons. The treaty, adopted in July 2017, recognized that radiation affects women and men differently, among other gender issues. The treaty is deeply opposed by Britain, the United States and many other Western nations as well as by Japan.

The tensions in the First Committee arose last week as a coalition of governments led by Canada, Ireland and Sweden is promoting gender issues in as many General Assembly resolutions as possible to ensure that new language best reflects goals for acknowledging the gendered effects of weapons and other explosive devices used in conflicts.

The effort calls for inclusion of these impacts in two ways: through enhanced language on the participation of women in disarmament processes and taking into account the differential impact of weapons and conflict by gender; and calling for sex-disaggregated data and programming.

Britain did not oppose references to the equal participation of women in disarmament processes in the consultations, sources say, but its request, for example, to change “gendered impact of unregulated and illicit arms flows” in the preambular paragraph proposed for the Arms Trade Treaty with “negative impact,” surprised people in the disarmament committee and outside it.

The treaty, which regulates international trade in conventional weapons, was the first of its kind to specifically include a gender-based violence provision. It entered into force in 2014. Britain has ratified it but the US has not.

Other governmental delegations in the committee did not oppose the suggested change by Britain. Amending existing resolutions is done not only to update language but also to keep the documents and treaties current on the General Assembly agenda.

Allison Pytlak, the disarmament expert for the Women’s International League for Peace and Freedom, cited the Program of Action to Prevent, Combat and Eradicate the Illicit Trade in Small Arms and Light Weapons in All Its Aspects — UNPoA — as an example of an update.

In June 2018, a review conference of the UNPoA, originally drafted in 2001, produced a document that included references to the gendered effects of small arms and encouraged related responses, such as women’s participation in regulating the weapons. Building on this agreed language to improve the relevant First Committee resolution is one way to strengthen the gender sensitivity of resolutions overall, Pytlak said.

But the request by the British delegation last week is inconsistent if not contrary to Britain’s official position and policy on gendered language, as declared by the country’s special envoy on preventing sexual violence in conflict, Lord Tariq Ahmad of Wimbledon. Earlier this year, the government released a National Action Plan for Women, Peace and Security, which addresses “gender based violence.”

As the plan defines it: ” ‘Gender-based violence’ is an umbrella term for any harmful act that is perpetrated against a person’s will, and that is based on socially ascribed gender differences between males and females.”

It notes, “Action to drive down and respond to conflict-related gender-based violence builds on and accelerates the UK’s track record of global leadership in this area.”

The inconsistencies between Britain’s official stance and suggested language changes in the UN were tweeted on Oct. 11 by Anna Macdonald, who works for Control Arms, a network of 100 organizations to promote the Arms Trade Treaty. Macdonald called it “bizarre” that Britain did not seem to support the “gender sensitive programming” of the committee.

During a short phone call between committee meetings on the subject last week, Macdonald told PassBlue that Britain’s actions didn’t add up.

“It doesn’t make sense, and we’re generally perplexed by it,” Macdonald said. “It’s so ridiculous, and at odds with other parts of the UK government efforts working to tackle gender-based violence.”

She added: “They support work to tackle GBV [gender-based violence], but they say they don’t agree gendered violence happens. This does not add up.”

Until now, Britain has “talked with some pride” about its work on the Arms Trade Treaty to include references on gender, said one person who follows disarmament negotiations closely at the UN.

When questioned about the clash, the delegation from the Irish mission to the UN declined to comment, as did the Canadian Foreign Ministry.

A person who participated in the consultations in the committee, suggested the about-face by the British delegation came from the government’s Counter Proliferation Program of the Foreign Office, at the request of its nuclear disarmament team. As work emphasizing the gendered impact of nuclear weapons is gaining traction, Britain may be trying to resist acknowledging that aspect, despite the provision in the Arms Trade Treaty.

According to an official in the British Foreign Office who spoke to PassBlue on background, Britain does not recognize nuclear weapons as those used in general warfare or as conventional arms, such as mines or artillery. Nuclear weapons are considered political weapons to be deployed as deterrents. Therefore, the same metrics of gendered impact may not apply, apparently.

(In 2011, a resolution was approved on women, disarmament, nonproliferation and arms control, drafted by Trinidad and Tobago.)

On Oct. 12, Liddle appeared to try to further defuse tensions, replying again to the same Twitter chain, writing: “Yes! We recognise the gendered impact the use of weapons can have and we support gendered approaches to these issues. We’re committed to gathering sex-disaggregated data.”

The twitter spat drew a response from Beatrice Fihn, the executive director of the International Campaign to Abolish Nuclear Weapons, which won the Nobel Peace Prize in 2017. On Oct. 11, Fihn retweeted Macdonald’s tweet. Fihn’s tweet got a clap back response from Liddle the next day. 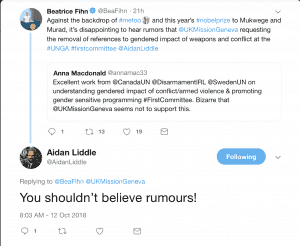 Liddle’s tweets do not walk back his delegation’s original request to change language on gender in certain resolutions being discussed in the First Committee. For now, the British change is not featured in any drafts of resolutions, according to several sources.