What if we lived in a world where countries competed to see which ones treated their citizens best — in a race to the top, Olympian style? Now there’s a way to get started. A project called the Human Rights Measurement Initiative has launched metrics and tools to track the performance of more than 140 countries, with colorful graphics that throw everything into sharp relief, from freedom from hunger to freedom to vote.

Brook said that she first became aware of a lack of human-rights data when she was working on country desks at the Paris-based Organization for Economic Cooperation and Development. “I was reading reports about human rights violations in countries I was working on, and I wanted to find a way to explore their relevance for economic growth,” she said. “But I couldn’t because there weren’t any comprehensive well-regarded datasets on human rights performance that we could use.”

The initiative, supported by private donations and contributions from organizations like George Soros’s Open Society Foundations, aims to fill that gap. It is also a resource to help further research and advocacy. Access to the data is free.

The project has already crunched existing data on economic and social rights (to things like food, housing and education) for 170 countries and collected its own data on civil and political rights from 13 countries so far.

The project’s latest data visualizations make it possible to learn at a glance both the extent to which a country is fulfilling its citizens’ human rights and which rights it is most deficient in meeting. The metrics use state-of-the-art statistical techniques for combining publicly available statistics and information from on-the-ground experts.

Human-rights advocates expect the initiative’s data to directly affect people’s lives. Seif Magango, Amnesty International’s deputy director for East Africa, said: “It will really help a great deal if we are able to show, in quantitative terms, the impact of bad laws on certain segments of society.

“I think comparing data in countries will show governments that they are behind the curve. And naturally, I think these governments would like to think they are in the top league, in terms of human rights and respect for people’s freedoms.”

The two “radar” charts shown below display some of the initiative’s findings in two countries, Nepal and Brazil.

Each axis represents a human right. The farther the score on each axis, the better the country’s performance on that right. The economic and social human-rights scores, in green, show the percentage level of human-right enjoyment achieved relative to what should be feasible for a country with that GDP per capita — in essence, the country’s immediate obligation under international law.This is calculated based on official statistics that have been collected by governments and international agencies.

Civil and political rights, in blue, are shown as scores between 0 and 10. These scores are produced from responses to a survey of in-country human-rights experts, using advanced statistical techniques to ensure comparability across respondents. (There’s more detail on methodology at the initiative’s website.)

A picture of Nepal’s human-rights performance 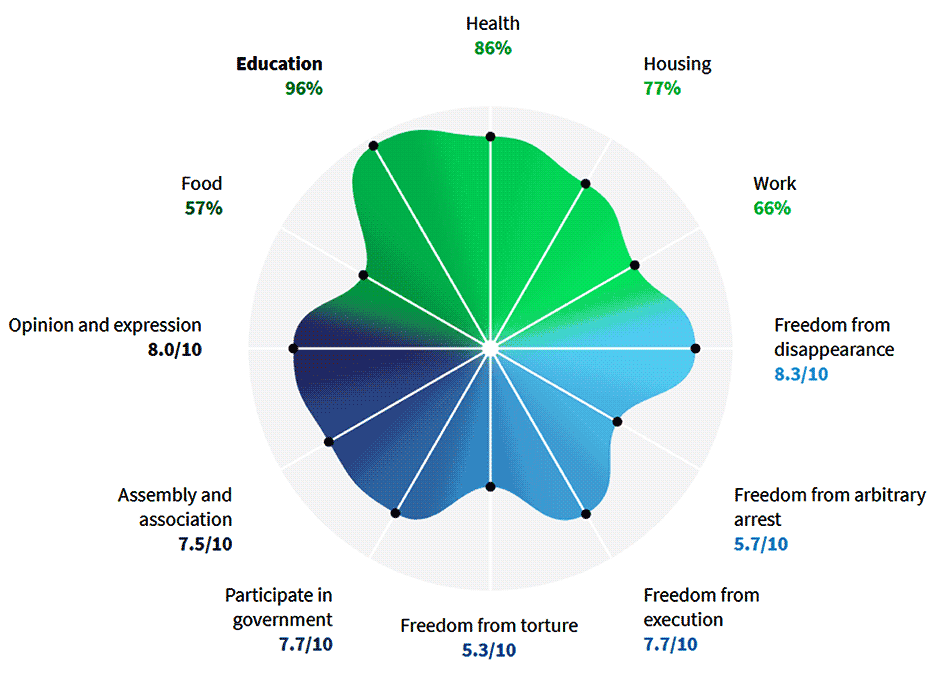 Each axis represents a right. The farther the score is on each axis, the better the country’s performance on that right. Economic and social rights (in green) are measured on the Core Assessment Standard. Source: 2018 Human Rights Measurement Initiative dataset, https://humanrightsmeasurement.org

“However, Nepal performs relatively poorly on the right to food. This result is driven by very high stunting rates among children aged under 5, a widely used indicator of malnutrition in a population. even taking into account its relatively low per capita GDP level.”

Similarly, in civil and political rights (shown in blue), the chart shows that Nepal performs much better in some areas than others.

A picture of Brazil’s human-rights performance 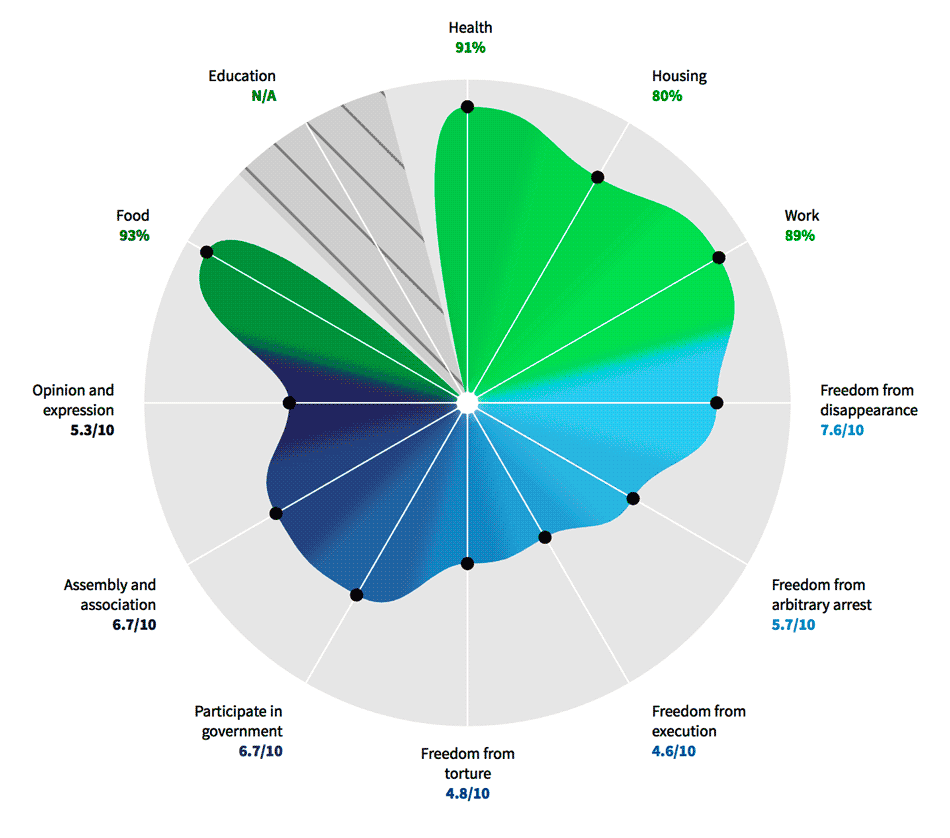 Each axis represents a right. The further the score is on each axis, the better the country’s performance on that right. Economic and social rights (in green) are measured on the Core Assessment Standard. Source: 2018 Human Rights Measurement Initiative dataset, https://humanrightsmeasurement.org

The radar graph for Brazil shows a different pattern. All the economic and social rights (in green) have quite high scores — though it’s important to remember that anything less than 100 percent means a country is failing to meet its immediate obligations under international law. The poor scores on civil and political rights (in blue) show that Brazil has some major challenges in these areas.

In addition, bar charts directly compare the performance of countries on each human right. The chart below compares scores on the right to freedom from arbitrary or political arrest across the 13 civil and political rights pilot countries: Angola, Australia, Brazil, Britain, Fiji, Kazakhstan, Kyrgyzstan, Liberia, Mexico, Mozambique, Nepal, New Zealand and Saudi Arabia. At the data website, users can click elements in the charts for further information.

In this chart, each score is presented with uncertainty bands around it. Clay, the initiative’s civil and political rights specialist, emphasized the importance of conveying uncertainty, given the often-murky information surrounding rights abuses.

“The smaller the overlap between two uncertainty bands, the more likely it is that those two countries have different levels of respect for that right,” he said. Australia and New Zealand, for example, have no overlap, so there’s a high degree of certainty that New Zealand is doing better than Australia on this right. The overlap between Mexico and Saudi Arabia means less certainty about which one performs better. 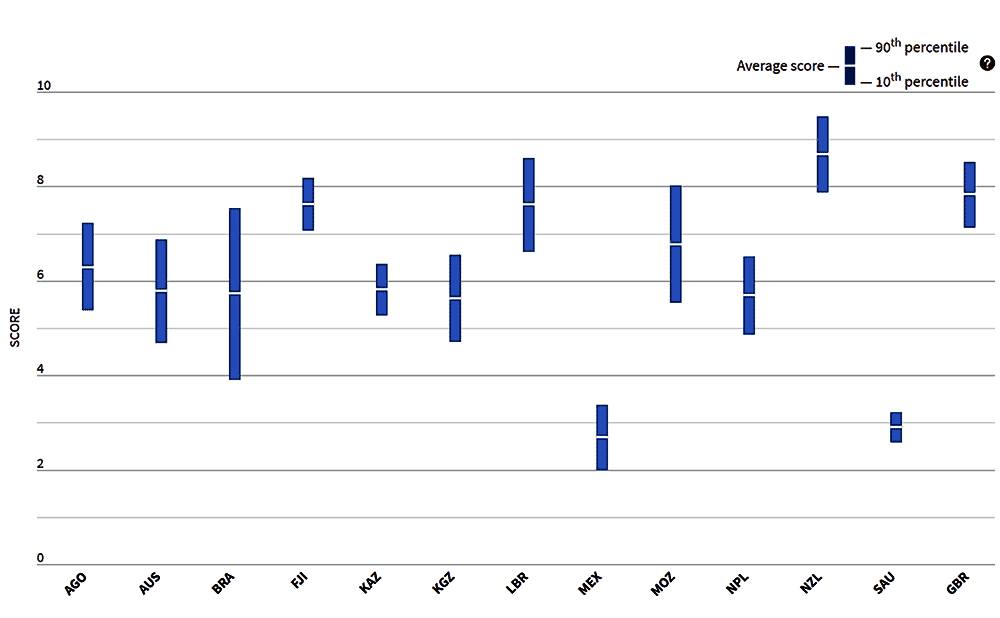 The intiative’s website also allows users to click the bar for each country to see a word cloud showing which groups the expert respondents were most concerned about. Here’s an example for Australia — on the right to freedom from arbitrary arrest:

“We want to encourage people to dig into these data and understand what lies behind each country’s experience,” Brook said. “We want researchers, advocates and policy advisers to use these data to better understand what laws, policies and practices most urgently need to change, and how to bring about those changes.”