Today and every day around the world, in bleak rural villages and the poorest urban neighborhoods, millions of people are igniting small fires to cook their meager meals, brighten dark homes or scare away intruders at night. The number of people using small fires is not small. Climate scientists estimate that three billion people in a global population of 7.7 billion are cooking with polluting fuels: wood, animal dung, locally produced charcoal or any flammable scraps of biomass they can find.

Added to this toxic brew are pollutants from trash fires, land clearing for agribusinesses and methane gases released in animal herds — much of it on the ranches and feedlots of beef-exporting Western Hemisphere nations in places like the Argentine pampas and the open ranges of Texas.

The importance of reducing these sources of carbon dioxide and other greenhouse gases such as methane, nitrous oxide and all fluorocarbons was not overlooked at the recent international climate conference in Katowice, Poland, from Dec. 4 to 15. About 200 governments and other participants debated the next steps in meeting the severe and documented threat of climate change. (Greenhouse gases trap solar radiation from the earth’s surface and convert it into heat capable of returning to further warm the earth’s lands and seas.)

Geopolitics got in the way, however, and dictated most of the attention at COP24, formally the 24th Conference of Parties to the 2015 Paris agreement on climate change. A central issue in discussions was the introduction of a rule book for measuring emissions reductions and other further actions.

The Trump administration, while planning to withdraw from the agreement entirely — which it cannot do until 2020, under current rules — obstructed and delayed the adoption of a final conference report. The United States was represented by Judith Garber, a deputy assistant secretary of state, the lowest rung of the upper hierarchy at the State Department.

The US, with its new best friends — the Saudis, Kuwait and Russia, all oil and gas exporters — objected to accepting unequivocally a crucial element of the authoritative report of the United Nations’ International Panel on Climate Change. They and a few others refused to endorse the goal of limiting global warming to 1.5 degrees Celsius above pre-industrial levels to guarantee the survival of natural planetary resources. Some nations, against the advice of climate scientists, have demanded that 2.0 degrees Celsius was a more realistic goal. That is reflected in the final agreement.

Brazil, where the populist Jair Bolsonaro becomes president in January, raised objections to elements of the new rule book for measuring emission reductions. Bolsonaro has pledged to reduce environmental restrictions affecting his country’s vast carbonsink in Amazonia for the benefit of agribusinesses. The Brazilians have backed out of holding the next COP conference in 2019. It will take place in Chile.

Kalina Oroschakoff and Paola Tamma, Politico.eu reporters, summed up what allowed the conference to declare success: “The deadlock was broken by all sides giving way. Rich nations agreed to put more money on the table to help poorer countries deal with the impact of global warming, and to give developing countries some leeway in meeting the rules on cutting their emissions. In return, developing nations agreed on common reporting requirements to track countries’ emissions reduction efforts — something that will apply to all countries.” 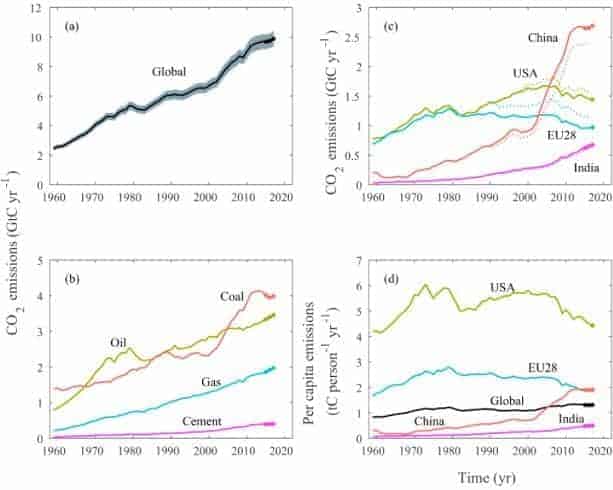 The Trump administration, inheritors of a world-leading emissions-reduction record in the last two years, largely through actions by the Obama administration, made its grudging acceptance of the Katowice document clear.

The State Department announced on Dec. 16, a day after the Katowice conference ended: “The United States is not taking on any burdens or financial pledges in support of the Paris Agreement and will not allow climate agreements to be used as a vehicle to redistribute wealth. We will work with our many partner countries to innovate and deploy a broad array of technologies that promote, improve energy security, and protect the environment.”

Back to the cooking fires, particularly the small warming blazes in Africa. On Dec.13, only a few days before the conference in Poland ended, Trump’s national security adviser, John Bolton, a longtime nemesis of the UN, spoke at the Heritage Foundation in Washington about a new US policy toward Africa. It is called Prosper Africa and it is, Bolton said, to be announced formally soon.

As outlined, the policy seems to be more of a program designed to engage American investors in dealmaking than a plan to help Africans where they most need assistance. The policy has no expressed human development aspects. Bolton said that among its aims would be fostering independence, self-reliance and growth at the national level.

The US would be looking to make “modern comprehensive trade agreements” and “expand markets for the US.” Africans would be warned by the new policy to avoid the blandishments of China and Russia.

Writing in Quartz Africa, its editor, Yinka Adegoke, put his cursor on the hidden heart of Bolton’s exposition, which was larded with America First rhetoric.

“It is hard not to have seen the early coverage of the United States’ new ‘Africa Prosper’ policy without quickly coming to the conclusion it’s the same or a facet of the White House’s China policy,” he wrote. “This is particularly true if you watched or read the combative comments by the US national security adviser Ambassador John Bolton.”

Adegoke is waiting for more information, since “there are few details as of yet to really help understand how this could work.” But he thinks it might not be a bad move for Africans if the US does not overdemand exclusive ties to its assistance.

UN data show that the population of Africa, with few exceptions, will continue to grow rapidly throughout this century, defying global trends to lower fertility and rising from 1.7 billion people in 2017 to 4.5 billion in 2100. That is close to the projected 4.8 billion people of Asia in 2100 and amounts to about a quarter of the global population by then.

Paradoxically, the World Bank projected in 2016 that while aggregate African poverty levels were declining, the number of people living in poverty was actually rising.

The poorest Africans are expected by many aid organizations to face severe effects of global climate change, especially from extended droughts in large sub-Saharan regions. The added strain on the environment could be unimaginable, as desperate families still dependent on biomass fuels, in shorter and shorter supply, for their cooking and heating fires. Health and nutrition suffer; millions more could turn to risky migration.

Nongovernmental organizations of many kinds are aware of the current and future needs of Africa’s poor, particularly women, who could benefit the most from the convenience of cookstoves. The Clean Cooking Alliance is a public-private partnership of 1,800 members who, organized by the United Nations Foundation, have introduced nonpolluting stoves and fuels to more than 80 million households.

The alliance’s message is straightforward: “The global community cannot reach its goal of addressing climate change without addressing the way people cook.”

Yet large-scale investment in clean cookstoves for Africa and parts of Asia has not materialized, where cooking and other energy needs of rural women are still mostly overlooked. The problem isn’t likely to get the attention of the Trump administration’s Prosper Africa plan, which seems designed to go over the heads of the neediest.

“Although improved cookstoves help everyone — they lower emissions, cut firewood use and reduce forest degradation — the uptake of such stoves has been slow,” two Duke University experts wrote in a study for the Brookings Institution. The study, by Lauren Masatsugu and Subhrendu Pattanayak, suggests that carbon financing may be used to improve clean cookstoves for homes where there will never be electricity and bring new money to the suppliers of these stoves.

Carbon pricing to deal with the causes and effects of climate change, while used to improve the lives of poor families, is a contentious issue, however, including in the framework of the Paris agreement. Further discussion on using market forces to help reducing emissions within the COP has been put off for a year.

Re “The three billion people cooking with polluting fuels: wood, animal dung, locally produced charcoal or any flammable scraps of biomass they can find.” Two comments on this. One is that much of the fuel these poor people use, has for decades been disappearing or at least sourced from further and further away from where they live. Second, most of these fires are used intermittently and increasing fuel-transport costs are inhibiting the use of wood-based fuels. Even so, consider the other sources of pollution from people who can afford to do better:
∙ “ global vehicle population stood at 1.32 billion cars and trucks at the end of 2016.
∙ According to the Telegraph “This year commercial aircraft will carry nearly four billion passengers,”
∙ Port Technology reported “Global Container Shipping to Pass 200 Million TEU in 2017″ (TEU = the twenty-foot equivalent shipping container unit).
∙ Annual Coal consumption in 2012 was put at 9 billion short tonnes.
∙ Add to this the effluvium from nearly 8 billion humans and billions of animals, thousands of steel and other furnaces, heat produced from millions of air conditioners etc., etc. The list goes on.

It does not really matter whether we believe or disbelieve in global warming. Nor does it matter who is rich, poor or in between or, if one’s aim is to ignore global warming while markets are made bigger, profited from and then the cycle of that ignorance goes on. The results of global warming and excessive pollution from whatever sources will increasingly and inexorably change the world in which we live without regard for people or populations.