Where Is the Worst Place for a Child to Be Born?

By one measure — the chances of surviving to young adulthood — sub-Saharan Africa and South Asia have the highest rates of child deaths at every stage of childhood. By contrast, the best place to be born this year was Australia or New Zealand, where only two of every 1,000 babies die in their first month of life, on average.

The good news for children generally? Considerable progress has been made globally to reduce child mortality since 1990, according to the annual report by the United Nations Inter-Agency Group for Child Mortality Estimation. The report, a dry statistical breakdown for 2017, does not answer such basic questions as to what accounts for the progress.

In the regions that struggle the most, various factors come together to make a child’s chances of survival difficult. A child born to a poor, uneducated, teenage mother who already has a child under two years old is at the greatest risk of dying in the neonatal period, or the first month of life. Because of continued large population growth in sub-Saharan Africa, the number of neonatal deaths has not decreased since 1990, even though the rate has decreased. 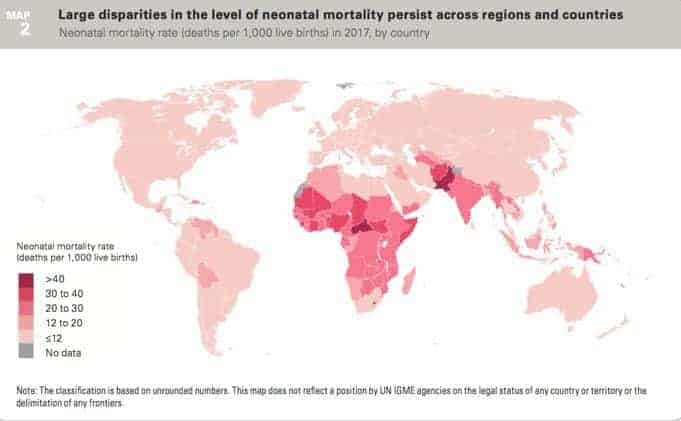 A child’s chance of survival increases after the first month of life, but significantly after the fifth birthday. Eighty-five percent of the estimated 6.3 million children who died in 2017 were under five years old. Half of those children lived in sub-Saharan Africa and 30 percent lived in Southern Asia. Sub-Saharan Africa’s share of that number has significantly increased from 30 percent in 1990 and is projected to grow to 60 percent by 2050.

That projection indicates that the region has been left far behind as the rest of the world has progressed in reducing child mortality.

“Children are dying because of who they are and the environments into which they were born — whether they be impoverished families or marginalized communities,” the report says. Poverty, uneducated mothers and poor air quality all increase a child’s chances of dying in the first five years of life. Children in rural areas tend to have a higher risk of death, but within urban areas, children from poorer households tend to have higher mortality rates.

According to the World Health Organization’s estimates cited in the report, the leading causes of death for children under age five are preterm birth complications, pneumonia, intrapartum-related events, congenital problems, diarrhea, neonatal sepsis and malaria– most of which are preventable with early intervention. Sub-Saharan Africa particularly struggles with infectious diseases.

The world overall has also seen a major decline in gender disparity in child mortality, but it is still feeling the effects of decades of China’s one-child policy and the related widespread practice of aborting female fetuses. Yet China has seen one of the largest declines in child mortality since 1990. Its under-five mortality rate went from 54 per 1,000 deaths in 1990 to 9 per 1,000 in 2017, approximately matching the rate of the world’s high-income countries.

Although still low, the United States’ under-five mortality rate has continuously lagged slightly behind Western Europe’s. The report offered few details on the disparity, and Unicef did not respond to multiple requests for comment or additional information about the statistics for the US.

India also suffers from a severe gender imbalance in its population as a result of a longstanding cultural preference for sons. In Pakistan, the cultural preference for sons and inaccessibility of contraception translates into the country having one of the highest abortion rates globally — even though most hospitals will not administer the procedure unless the mother’s health is in danger.

In fact, an unprecedented imbalance in sex ratios of more boys than girls being born is underway in six Asian countries. The unusually high sex ratios at birth favoring sons in China, Azerbaijan, Armenia, Vietnam, India and Georgia are not normal reproductive results for a society. The increasing sex imbalances at birth are primarily a result of a combination of three factors: a strong preference of couples for sons over daughters; fetal-sex determination followed by abortions of female fetuses; and rapid declines in the number of children per couple to comparatively low levels.

Globally, however, boys are actually expected to have a higher probability of dying before reaching age five. Although the Unicef report did not say why, researchers have suggested that boys are biologically weaker and more susceptible to diseases.

For children who live past age five, the causes of death shift, with accidents and injuries becoming the single-leading cause, at 30 percent. Noncommunicable diseases and nutritional causes follow close behind.

“In sub-Saharan Africa, communicable diseases and perinatal and nutritional causes still account for almost two-thirds of all deaths of children aged 5-14, while they account for less than 8 per cent in Europe and North America,” the report says.