As His Country Wages War, President Hadi of Yemen Still Travels to US for Health Care

CLEVELAND, Ohio — On the main drag of Euclid Avenue in this Midwestern city sprawls the main campus of the Cleveland Clinic, the renowned hospital that attracts an estimated 2.5 million patients nationwide and abroad, including from the Middle East. That includes President Abdu Rabbu Mansour Hadi of Yemen, who has heart troubles and whose country has been at war for more than three years.

The main entrance to the clinic resembles an international airport terminal, with the word “welcome” written in many languages across a ceiling drop, making it easy to forget you are in a hospital. Shops abound, selling things like “wellness” products, while a food court offers such cuisines as Aladdin’s Eatery.

The Cleveland Clinic has always been the subject of gossip and articles about Middle Eastern largess, with casual conversation about the facility invoking tales of Saudi royalty taking over a wing of the hospital, for example, as patients. A city shopping mall was closed to the public for two hours once, so that a party from the United Arab Emirates could shop privately, according to Cleveland Magazine.

As part of its growth in the United States and overseas, the clinic opened a hospital in Abu Dhabi in 2015 and a training center in Riyadh in 2012. But Middle Eastern leaders, like Hadi, and royalty are still traveling to the Cleveland base for medical care.

The story of Hadi’s presidency is head-spinning. He is a former vice president and acting president who became president in 2012 through a US-brokered arrangement. In 2015, he was forced to resign after a coup by the country’s Houthi rebels, who were supported by the former Yemeni president, Ali Abdallah Saleh. The Houthis killed Saleh in December 2017.

Hadi has reportedly been under house arrest in Riyadh, the Saudi capital, since the coup, as his country erupted into war in March 2015, when a coalition led by the Saudis and United Arab Emirates began dropping bombs in Yemen, with an American green light. In 2017, the Houthis, who now control most of Yemen, sentenced Hadi and six other senior officials of his government to death for “high treason,” according to the Houthi-run Saba news agency.

These restrictions have not prevented Hadi from traveling to the US to the Cleveland Clinic, which he appears to have been doing regularly since 2011, for unspecified heart treatments. A sudden visit in September entailed a supposed routine checkup, but he abruptly returned in late October, after appearing at the United Nations General Assembly’s annual gathering of leaders.

Eileen Sheil, the Cleveland Clinic’s spokesperson, would not confirm whether Hadi was a patient, citing privacy laws. She also did not answer a question as to whether use of the clinic by the Saudis has declined since the October 2018 murder of Jamal Khashoggi, the Saudi-born journalist who wrote for The Washington Post; or whether the Saudis’ bombing of Yemen, murdering thousands of civilians, including children, has dampened the use of the clinic by the royal family. 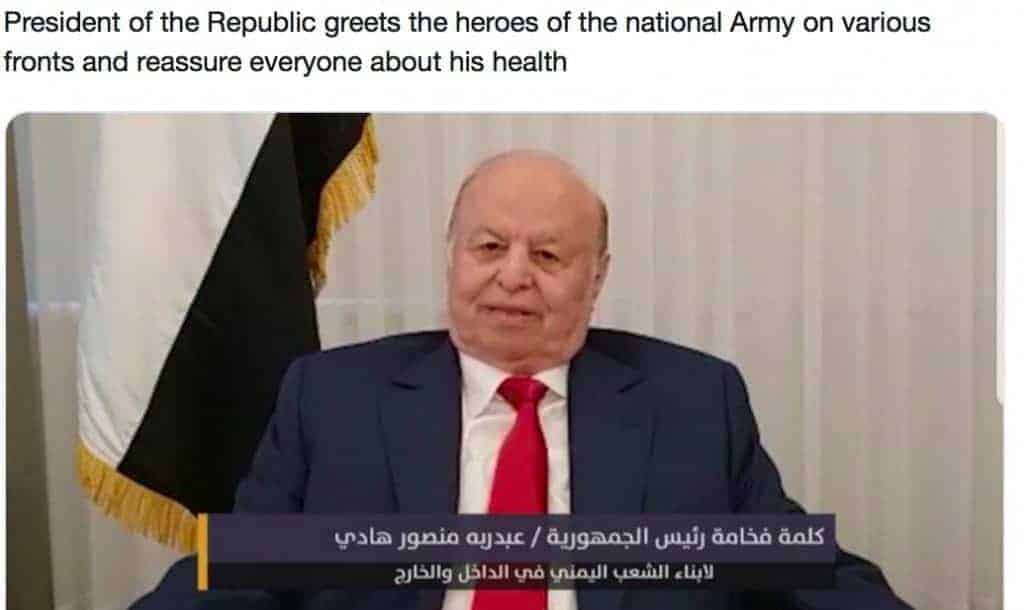 Hadi’s recent visit to the Cleveland Clinic was known in the Muslim community in the city and among Yemeni-Americans in New York, according to interviews recently. Two well-placed sources in Cleveland, who requested anonymity because of the sensitivity of the topic, said that Hadi had received a heart-valve replacement at the clinic, and that he came in the fall with an entourage that stayed at the InterContinental Suites Hotel, which is located on the clinic grounds. Members of his family may still be there. Hadi apparently gave away expensive watches while staying in Cleveland.

The Yemeni-American population in the city is small, compared with other immigrants from the Middle East, but word spreads fast when a Middle Eastern bigwig arrives, especially if the bigwig’s country is in a war that has left most of its people on the edge of starvation. (The UN-recognized government of Hadi controls a minority of the country, in the south.) According to the Saba news site, Hadi left the US on Dec. 10, although it didn’t say from where he left.

On Twitter, the Yemen embassy in Washington wrote that day: “His Excellency President Hadi departed today from the #USA. Indeed, @HadiPresident is in very good health, and continues overseeing with vigor his Gov’t’s sincere efforts to realize peace in#Yemen.” 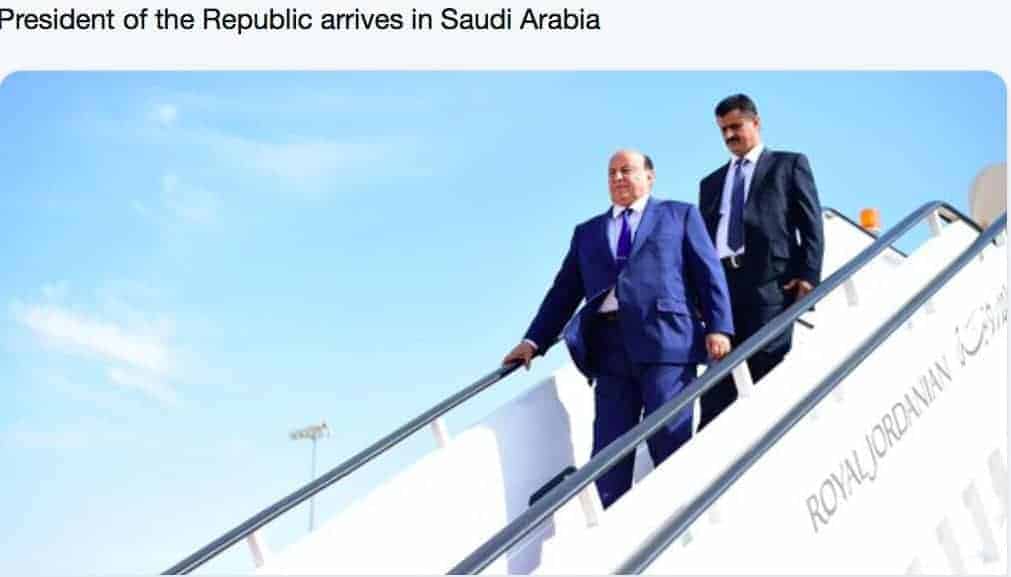 He appeared on his presidential Twitter page on Dec. 11, above, arriving in Saudi Arabia on a Royal Jordanian jet. He apparently stayed at the Cleveland Clinic for most of the fall and was rumored to have been visited by the UN envoy for Yemen, Martin Griffiths, before the consultations in Sweden began on new peace talks, in mid-December. Griffiths apparently visited Hadi to receive his blessings for the talks.

Hadi’s activities can be tracked on Saba, his official Twitter page and that of the Yemen embassy in Washington. They generally show him meeting with dignitaries and his government officials. On Dec. 17, he is pictured with the US ambassador to Yemen; on Dec. 27, he is sitting with the ambassador from Sudan to Yemen, who is saying farewell to Hadi in an ornate setting, most likely in Riyadh.

Hadi talked with UN Secretary-General António Guterres on Dec. 13. Details are not given, but what one close follower of Yemen finds mind-boggling is that Hadi is still exercising his prerogatives as president in the new UN process to end the war, even though he controls only one part of Yemen as an exiled leader.

Hadi was not present at the Stockholm talks, convened by Griffiths, although Griffiths said he was in touch with Hadi during the consultations. So far, the talks have resulted in an agreement for an immediate cease-fire in Hudeidah, a port city, between the government-backed forces and the Houthis.

As of late December, a full pullout by the Houthis in Hudeidah has stalled, according to the UN. The UN sent Ret. Gen. Patrick Cammaert of the Netherlands to Yemen before Christmas to lead the new Redeployment Coordination Committee to monitor compliance of the Stockholm Agreement by the parties. He will meet with the committee again on Jan. 1.

Some results of the Stockholm Agreement have been noted on the Twitter account of the Yemen embassy in Washington and Hadi’s official page. On Dec. 27, both sites pictured him meeting with members of the Yemeni Parliament to direct it to pay the salaries of administrators in Hodeidah, as part of confidence-building measures.

On Saba, reporting from Riyadh, President Hadi said the Stockholm plan “regarding ceasefire and peaceful handover of Hodeidah port city by the Houthi rebels puts the UN and the international community, as the deal’s sponsors, to the test.”

Throughout the fall, Hadi’s whereabouts have been recorded in Riyadh and in the US but no presence in Yemen. Some comments on his Twitter page reveal little information on possibly important conversations, such as on Nov. 21, when Hadi sent “a message of thanks to Saudi and UAE leadership.”

Hadi appears well in recent official tweets, although in October and November, he looked overweight and puffy. On Oct. 2, he called Crown Prince Mohammed bin Salman of Saudi Arabia — the same day that Khashoggi was murdered in the Saudi consulate in Istanbul.

Back in September, when Hadi’s heart problems emerged more publicly, official tweets announced on Sept. 2 that he was heading to the US, with no explanation provided. On Sept. 29, a tweet said that Hadi returned from the UN in New York to Riyadh.

The relationship between Yemen, a resilient country that shares a long northern border with Saudi Arabia, has a history of “extensive social, religious and business ties” with its neighbor, according to a Wikileaks cable of June 18, 2008, written by a State Department official. A summary of the relationship and more details are explained under the cable’s heading, “Yemen’s Big Brother: What Has Saudi Arabia Done for Yemen Lately?”

The cable describes a relationship that Yemenis perceive “as heavily balanced in favor of Saudi Arabia, which remains involved in Yemen, to the extent necessary, to counter the potential threat of Yemen’s unemployed masses, poor security, unrest, crime and the intentions of foreign countries (Libya and Iran) that might create a threat on Saudi Arabia’s southern border.

Yemen, on the other hand, growls at the hand that might feed it. . . . Consequently, Yemen has, on occasion, swallowed its resentment and acquiesced to Saudi wishes.”

How Hadi affords to travel to Cleveland and pay for his medical care there remains a mystery, as his country is cited as the poorest in the region. But a close observer of Hadi suggested that the presidency of Yemen is a “well paying job.” His country is also on the list of those denied visas into the US, through a Trump White House order. Most likely, he received a diplomatic visa as a head of state.

In December, several email and phone requests for clarification from the State Department elicited this automatic response:

“Due to the lapse in appropriations, the Press Office will be operating on a reduced status. Communications with the media will be limited to events and issues involving the safety of human life or the protection of property, or those determined to be essential to national security.‎ We will endeavor to be responsive to your query under those guidelines.”

Email requests and phone calls to the Yemen embassy in Washington for information on Hadi’s health also went unanswered.

Back in Riyadh, Hadi clings to administering to the remains of his ruined, heavily weaponized and subjugated country, while the UN tries to end the worst humanitarian disaster in the world.

As the 2008 cable on Wikileaks said, “The USG [US government] advocacy, however, must be tempered to ensure that Saudi Arabia knows the USG does not/not aim to make Yemen a vassal state.”

Dulcie Leimbach is the founder of PassBlue. For PassBlue and other publications, she has reported from New York and overseas from West Africa (Burkina Faso, Mali and Senegal) as well as from Europe (Scotland, Sicily, Vienna, Budapest, Kyiv, Armenia and The Hague). She has provided commentary on the UN for BBC World Radio, NHK's English channel and Background Briefing with Ian Masters/KPFK Radio in Los Angeles.

Previously, she was an editor for the Coalition for the UN Convention Against Corruption; from 2008 to 2011, she was the publications director of the United Nations Association of the USA. She has also worked as an editorial consultant to various UN agencies. Before UNA, Leimbach was an editor at The New York Times for more than 20 years, editing and writing for most sections of the paper, including the Magazine, Book Review and Op-Ed. She began her reporting career in small-town papers in San Diego, Calif., and Boulder, Colo., graduating to the Rocky Mountain News in Denver before she worked in New York at Esquire magazine and Adweek. In between, she was a Wall Street foreign-exchange dealer. Leimbach has been a fellow at Yaddo, the artists' colony in Saratoga Springs, N.Y.; taught news reporting at Hofstra University; and was a guest lecturer at the Columbia University Graduate School of Journalism. She graduated from the University of Colorado and has an M.F.A. in writing from Warren Wilson College in North Carolina.

3 thoughts on “As His Country Wages War, President Hadi of Yemen Still Travels to US for Health Care”

How Long Do You Have to Wait to Hear a Woman at the UNGA? 53 Speakers, to Be Exact