An Ode to Joy: The UN Expert on LGBTIQ Rights Stands

I woke to a flurry of messages from LGBTIQ activists across the world, coordinating activities. It was July 12 and the United Nations Human Rights Council in Geneva was about to vote on renewing the mandate of the independent expert on sexual orientation and gender identity — the SOGI expert, as it is called in the UN.

As I watched the vote online, with each subsequent amendment intended to derail the effort failing, the scoreboard overwhelmingly showed that the Council had voted to renew the mandate for three more years. I felt elated. As an advocate for LGBTIQ rights, working to support the cause through UN processes and mechanisms, including with the SOGI expert, is my bread and butter.

This vote marked a continuation of the UN’s efforts to ensure that all people, regardless of their sexual orientation and gender identity, have full access to their human rights, including protection against violence and discrimination. The vote also showed that the number of countries supporting LGBTIQ equality is growing and that civil society is truly a force to be reckoned with.

The expert office was created in 2016 to draw attention to the disproportionate violence, persecution and discrimination that LGBTIQ people face worldwide — including in 68 countries that still criminalize same-sex relations — and to affirm that human rights stand regardless of whom you love or which gender you identify as.

There have been numerous attempts to block the mandate, including 10 amendments proposed before the recent vote by several members of the Council from the Organization of Islamic Cooperation (OIC). The amendments, centered on themes of sovereignty and cultural relativism, aimed to establish that protection of the rights of LGBTIQ people is dependent on cultural norms, thus questioning the necessity and legitimacy of the mandate and hindering the universality of human rights. None of the amendments passed.

That these amendments were filed was to be expected. The OIC, the Africa regional group, Russia and other countries have opposed the mandate since its inception. What we saw on July 12 was the grip of these blocs weakening.

The resolution renewing the mandate was adopted by a vote of 27 in favor, 12 against and 7 abstentions, a much stronger margin than in July 2016 (23 yes, 18 no, 6 abstentions). It is especially notable that the Bahamas, Fiji, the Philippines and Tunisia voted in favor, representing cross-regional support for the mandate. Moreover, Tunisia and Albania, both members of the OIC, opposed filing the amendments challenging the mandate, shattering the argument that the OIC has long used: that the rights of LGBTIQ people are viewed homogenously across the Organization of Islamic Cooperation membership.

Abstentions from Angola, Burkina Faso, the Democratic Republic of the Congo, Senegal and Togo are also noteworthy, as the African bloc has been a staunch opponent of the mandate. (The United States played no role this time, having dropped out of the Human Rights Council in 2018.)

The makeup of allies by country has undoubtedly grown more diverse and stronger geographically. The resolution was presented by seven Latin American countries: Argentina, Brazil, Chile, Colombia, Costa Rica, Mexico and Uruguay. Moreover, 51 countries, representing every region of the world, co-sponsored it, up from 42 predominantly Western nations co-sponsoring the resolution in 2016. This time, not one of the key players was a so-called Western nation, signifying a turn of the tide and hopefully ending the claim that LGBTIQ equality is a Western value and reflecting that LGBTIQ people exist, and have existed, everywhere.

Latin American countries have long been supporters of LGBTIQ equality both at the UN and in the Organization of American States, the world’s oldest regional bloc, so their support and leadership is not surprising. Whereas the increased backing and lessening opposition from countries in Africa and the Caribbean and Pacific regions is remarkable. This change can be attributed to the decriminalization of same-sex relations: just in the last month, Botswana and Bhutan joined the club — an accomplishment won through the rising presence, activism and influence of LGBTIQ civil society.

The coordination and mobilization of global civil society behind the renewal of the mandate was impressive. When it was first created, it was challenged through a series of votes in the UN General Assembly. Civil society across the world defended it. Now we renewed it. The recent campaign was endorsed by 1,312 organizations from 174 countries and territories. For three weeks, numerous civil society representatives, including myself, traveled to Geneva to advocate for renewal. And we will continue to mobilize to ensure that the mandate remains and progress for LGBTIQ equality continues.

We look forward to continuing our work and collaboration with the independent expert, Victor Madrigal-Borloz, a Costa Rican lawyer, as we strive to ensure a world in which LGBTIQ people everywhere can live free from discrimination, harassment and violence, free to be who we are and love whom we choose. 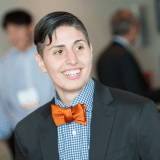 Sahar Moazami is the UN program officer for the US-based organization OutRight Action International, which fights for human rights for LGBTIQ people everywhere.