Every time the budget committee of the United Nations meets, as it did in June, child-protection advocates enter a familiar existential crisis: will the United States and China cut UN budgets specifically allocated to specialists on child protection in peacekeeping missions?

I am often asked by people in the UN why a child-rights advocate like myself follows the complex budget negotiations of the General Assembly’s Fifth Committee, where the spending of the UN peacekeeping is decided annually. I have even surprised myself that since 2015, I have been following the committee with keen interest. But this is truly where the protection of children in UN peace operations is grounded in reality, in dollars and cents.

As the Security Council meets on Aug. 2 for its annual debate on the topic of children and armed conflict, Council members and every other nation in the UN should go further than just reiterating their support of dedicated child-protection roles in peace operations. They should also question how these advisers will be transitioned from missions that are closing soon, such as in Darfur, Sudan. No one, it seems, has any idea.

On July 3, the Fifth Committee finished its session. Luckily this year, the jobs of child-protection officers in the five peacekeeping missions that still employ such specialists were retained throughout the often-arduous negotiations. This result, sadly, is not true for some other line-item budget costs, such as human-rights posts, which the US and China traditionally try to cut, with success.

This is precisely why 2015 was a turning point for child-protection advocacy at the UN.

That year, a recommendation by a high-level review of peace operations for Secretary-General Ban Ki-moon suggested integrating all child-protection posts under human-rights components in UN peacekeeping and political missions.

In simple terms, for example, this meant that 90 posts in the UN mission in the Central African Republic, or Minusca, were disguised under the line item labeled human rights. As a result, the child-protection posts were nearly cut in the June 2016 budget negotiations, when China and the US aimed to reduce UN peacekeeping budgets overall.

Since 2001, the 13 resolutions on children and armed conflict adopted by the Security Council have called for embedding stand-alone child-protection posts in UN peace operations. These dedicated posts, staffed by senior-level experts, have been essential for negotiating with armed forces and other groups for the release and reintegration of thousands of children who were recruited to participate in fighting or for other uses. This is one example of how child-protection experts can make a difference.

These advisers have been instrumental in ensuring the safe transfer of children to civilian authorities in situations where children were detained for associating with militias like Al Shabab in Somalia, amid large security sweeps.

The experts also guide military commanders in peacekeeping missions on new directives to ensure the protection of schools in conflicts, among other positive examples. It is essential that UN child-protection advisers be present in peacekeeping settings and that their services be fully financed so they can take care of the needs of children that civil society experts like myself encounter in our work.

That is why the child-protection community of nongovernmental organizations has been fighting for these dedicated posts and their budgets.

Nothing could be more crucial now, as the ripple effects from attacks on multilateralism are manifested in budget cuts that critically hurt the UN. These effects lead to further assaults on safeguarding human rights, as the accountability cycle deteriorates and those who bear the consequences are the children that we are meant to protect.

Even though the language on ensuring child protection adopted by the UN budget committee was not contested this year, overall budget envelopes were fought over. Such disagreements may still affect child-protection services as the UN Secretariat makes more allocations.

With the UN mission in Darfur and the Democratic Republic of the Congo both drawing down, more fear arises. These missions have faced severe cuts to child-protection services in recent years, notably under the Trump administration.

In Sudan, the Darfur (or Unamid), mission faced a 55 percent cut in 2017 and currently has only three child-protection advisers left in the mission. Yet grave violations against children continue to be committed, including killing and maiming, abductions and attacks on schools and hospitals.

Child-protection adviser posts in Monusco, in the Congo, the largest and longest-running peace mission, have been reduced from 38 to 30 in only five years.

The UN needs to devise a clear transition plan for child-protection functions in peacekeeping missions that are closing. Civil society groups are watching this space with a keen eye, ready to support the UN Department of Peacekeeping Operations so child protection is not a casualty from lapses in preparedness.

In places where armed groups prey on children and youth and the groups have no regard for international law, child-protection experts can prevent militias from recruiting children through consistent dialogue and other means. Without such specialists around, the cycle of conflict will continue. 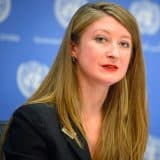 Dragica Mikavica has spent the last six years advocating for children affected by conflict through the UN and is currently working for Save the Children in New York. She grew up in Bosnia during its civil war, in the early 1990s.