Donald Trump must have known just what he was getting into when he named Kelly Knight Craft to be the United States ambassador to the United Nations.

But does Knight Craft understand the humiliating position the president is putting her into?

Knight Craft, the soft-spoken wife of a billionaire coal executive from Kentucky, demonstrates scant knowledge of foreign affairs and showed little interest in the nuts and bolts of diplomacy or policymaking during her 22 months as the United States ambassador to Canada.

Critics say she qualified for the posting to Ottawa by joining her husband in showering millions in campaign contributions on numerous Republican politicians, notably Trump and Senate Majority Leader Mitch McConnell, who happens to represent her home state of Kentucky.

A study by Senate Foreign Relations Committee Democrats found that she was absent from Canada for well over half the days she was assigned to serve there. She spent more than a third of her total time in the job on 43 separate trips either to her family home in Kentucky or to her husband’s place in Oklahoma. So it’s hard to swallow assertions that she pursued the UN job because she now wants to immerse herself in international relations.

At the same time, she publicly pledged, during her June 19 Foreign Relations Committee confirmation hearing, to fully support Trump’s policies, no matter how whacked they may be. And unlike her immediate predecessor Nikki Haley, who began assembling a political machine of her own after stepping down as US ambassador at the end of 2018, Knight Craft has displayed no ambitions for higher office. In other words, the president won’t have to worry about her upstaging him or, worse, deciding to run against him.

(Haley, while openly preparing for a 2024 presidential run, acts as if 2020 is also a possibility if something befalls her boss; although, in a ham-handed Aug. 21 tweet, she dismissed suggestions that she might replace Vice President Mike Pence on the 2020 Trump ticket as “false rumors.”)

But how much thought has Knight Craft given to the downside of her new appointment? She is showing up at the UN as Washington could not sink lower in the eyes of world leaders. With Trump ceaselessly imitating a spoiled 5-year-old in both domestic and international affairs, most world leaders and governments are giving him wide berth.

He is pathologically rude and dishonest, and his crude Twitter insults target many of his country’s closest friends and allies while sparing some of its fiercest foes. And who can take seriously his steady flow of random policy pronouncements, which appear to come out of nowhere, change from minute to minute and often differ from those expressed by Secretary of State Mike Pompeo and National Security Adviser John Bolton?

In recent days, for example, there was the tweet ordering American companies to stop doing business with China. That came shortly after he announced he wanted to buy Greenland from Denmark, then dismissed the Danish prime minister, Mette Frederiksen, as “nasty” after she characterized the idea as “absurd.”

Knight Craft must know that Trump is particularly unpopular at the UN, not only because he acts like an arrogant boor when hanging out with foreign leaders but also because he has slashed funding for many of its key programs and has expressed interest in cutting additional billions. (Knight Craft told the Senate Foreign Relations Committee that more of this kind of “reform” would be her top priority, and if anything required more funding, this should come from other governments and not her own.)

Trump has also pulled Washington out of a slew of UN agencies and agreements, including the Human Rights Council, Unesco, the Paris climate pact and the Iran nuclear deal.

More broadly, he has actively undermined the very foundations of an international world order cobbled together after World War II to ensure future peace and security. Pompeo and Bolton have joined him in urging the international community to shun multilateral approaches and instead blindly fall in behind Trump’s America First approach.

Does Knight Craft need more proof that Trump is a walking UN punch line? Does she recall his performance at the General Assembly last year, when delegates burst out laughing after he bragged that he had “accomplished more than almost any administration in the history of our country”?

Which brings us back to Knight Craft, who is wrapping up one of the more bizarre disappearing acts in modern politics. The Senate approved her nomination on July 31, capping a seven-month period with a vacancy at the top of the US mission to the UN. So what did Kelly do then? She vanished from the public eye for more than three weeks, not even surfacing to take the oath of office. When she did finally make an appearance, it was in . . . ?

No, not Washington, and not New York. Ottawa. 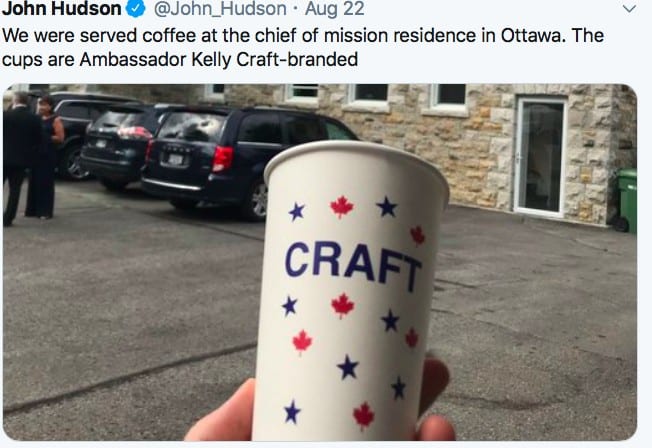 While serving as US ambassador in Canada, she was absent from her post so much that it amounted to “a dereliction of duty,” said Bob Menendez of New Jersey, the Foreign Relations Committee’s top-ranking Democrat. And here she was, missing in action again, before even showing up for the first day of work at her new job.

Knight Craft inexplicably remained out of sight until Aug. 22, when she popped up at the Ottawa airport to greet Pompeo, who was coming to town for meetings with top Canadian officials. (As noted in the tweet above, some media traveled with him.)

She had still not been sworn in as UN ambassador. She had yet to set foot at the UN for an introductory meeting with UN Secretary-General António Guterres or to be presented with her official credentials. Between Aug. 1 and Aug. 22, US officials could not say where she was, what she was doing or when she might arrive in Turtle Bay to assume her new duties.

It was Canadian Foreign Minister Chrystia Freeland who let the cat out of the bag. “I want to take this moment of giving thanks to our American friends to recognize Ambassador Kelly Craft,” she told reporters during Pompeo’s visit on Aug. 22. “She’s been with us today, and today is her last day in Canada, so thank you for giving us such a great ambassador and thank you very much, Kelly, for your hard work here. We’ve really appreciated it.”

Not that anyone let Knight Craft utter a word during the day’s several media availabilities with Pompeo and Freeland.

The next day, Knight Craft tweeted a picture showing her seated at a long table for a “working lunch” with Freeland and Pompeo. Did it ever occur to her that her time might have been better spent accompanying Pompeo a few days earlier, on Aug. 20, when he visited the UN Security Council to drum up support for Trump’s Iran policies and afterward had a chat with Guterres?