Globalists vs. Patriots at the UN: A ‘Great Fracture’ Revealed

After most of the world leaders spent a day teaming up to fight climate change at the Climate Action Summit, the next day strongmen opened the high-level debate of the United Nations General Assembly, showing a growing split between nationalist and globalist leaders.

“I fear the possibility of a great fracture,” UN Secretary-General António Guterres said in his speech, the first to speak on Sept. 24. While Guterres was referring to the United States-China divide, the greatest split ended up being between patriots and multilateralists in the debate of dozens of national leaders.

While their attitudes differed — the speech by President Jair Bolsonaro of Brazil was energetic and aggressive while President Trump’s tone was strangely subdued — the two men’s speeches had much in common: they talked about the threat of socialism around the world, appealed to a religious audience (predominately Christian) and attacked nongovernmental organizations and the media.

The similarities between the two speeches is probably no coincidence, as Bolsonaro apparently got advice from Steve Bannon, Trump’s former campaign adviser and a nationalist, while Brazil’s foreign minister was visiting Washington, D.C., a few weeks ago, according to Brazilian media reports.

Bolsonaro knew what the world wanted to hear from him at the General Assembly: the Amazon. He went straight to the point, reaffirming his intent to develop the world’s largest rainforest and accusing the international community of nations and civil society groups of wanting to keep indigenous people in Brazil as “cavemen.” He also accused international media of lying when reporting on the rainforest.

By supporting economic development in Brazil’s portion of the Amazon, Bolsonaro also warned his audience of the dangers of socialism, using Venezuela as an example of a failed socialist state.

Bolsonaro’s speech also appealed to Christians in Brazil by referring to God several times, even quoting the New Testament.

While Bolsonaro claims that most indigenous people in Brazil agree with his policy of development in the Amazon, an indigenous coalition are bringing a case to the International Criminal Court against him for climate genocide.

Trump’s speech echoed similar ideas and passions, as he spoke second, right after Bolsonaro. Trump also talked about the dangers of socialism, a political ideology increasingly popular with certain Democrats in the US, saying that “socialism only works for the ruling class.” He also called Venezuela’s President Nicolás Maduro a “Cuban puppet.” (The US just revoked visas of several diplomats from the Cuban mission to the UN.)

Unsurprisingly, Trump told the world that what he cares the most about is his own citizens, adding that other countries should do the same: “The future does not belong to globalists. The future belongs to patriots,” he said.

While Trump’s speech tracked his customary nationalistic and patriotic rhetoric that he has been repeating annually at the UN debate, this year’s stood out for the little enthusiasm shown by the Americans sitting in the US seats in the General Assembly, while Trump read on. Images of US Secretary of Commerce Wilbur Ross appeared to reveal him asleep.

Meanwhile, photos of a Venezuelan representative sitting in her country’s section showed her reading a book. On Twitter, several people wrote that it was “Bolivar, heroe, genio y pensamiento universal,” or “Bolivar, hero, genius and universal thought.” 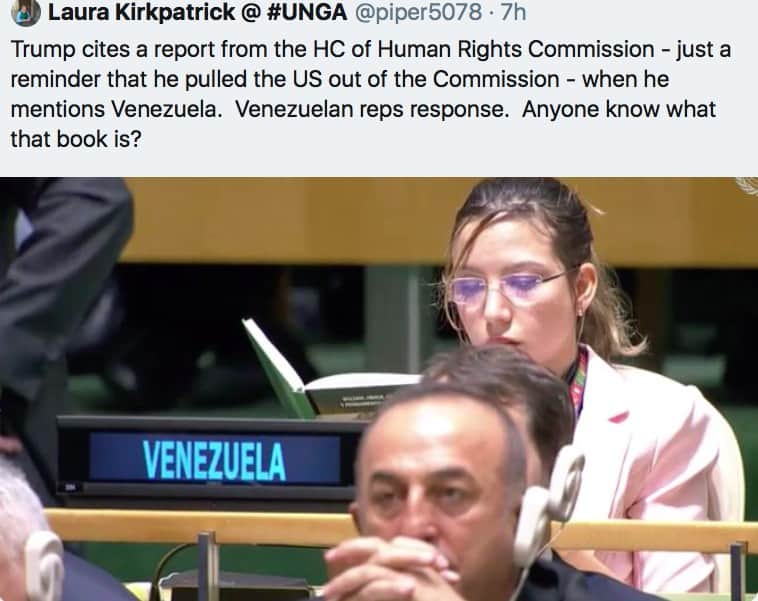 The Venezuelan diplomat reading during Trump’s speech in the UN General Assembly.

The rather refined writing of Trump’s speech also stood out, especially compared to his speeches in the previous two years. He even used a poetic turn, saying, for example, “America’s goal is not to go with these endless wars, wars that never end.”

Could Trump’s remarkably subdued tone be explained by the fact that he knew that the House of Representatives would announce an impeachment inquiry against him at the end of the day?

But Trump did not leave his electorate base disappointed. His tone on immigration was severe and, like Bolsonaro, he accused nongovernmental organizations of interfering in the internal affairs of the US and promoting human smuggling, especially at the US-Mexican border.

He warned: “Do not pay the smugglers, the coyotes, do not put yourself or your children in danger. You will not make it here or be released into our country.”

He also maintained his threats toward his current biggest enemy, Iran.

While talking about US military power, he added: “Hopefully it will not have to use this power. Others seek conquest and domination, our nation must be strong in wealth, might and spirit.”

A topic that did not come up much in his speech? The United Nations. Possibly because the US owes $1.05 billion in dues to the UN regular budget and $2.38 billion to the peacekeeping budget.

Turkey in the Middle

Recep Tayyip Erdogan, the president of Turkey, stood out for the calm, modest tone of his speech, addressing directly issues that he cares about. While Erdogan does not fit neatly in the globalist or populist camps, his speech fell into the middle. He also attracted attention for his extensive use of illustrations, one showing different maps of Israel from 1948 to today, asking where are the borders of the country.

The overarching theme of his speech was injustice and inequality, topics that he has curiously used to compare obesity rates in rich countries with hunger in other parts of the world.

Migrants and refugees were at the center of his speech, reminding the audience that Turkey has taken in the highest number of Syrian refugees since the war began there. Erdogan asked the world to find a plan to help them return home and asked for an expanded “safe zone” in northern Syria. He took out a picture of Aylan Kurdi, the Syrian toddler refugee whose photo of him washed ashore on a Mediterranean beach in 2015 triggered a worldwide wave of sympathy.

While being a controversial figure at home from having weakened the rule of law after the failed 2016 coup, Erdogan acted as a peacemaker in front of the international leadersat the UN. By doing so, his speech embodied vast contradictions between his domestic and foreign policies. While some people think of him as having dictatorial tendencies and oppressing Kurdish minorities at home, Erdogan preached tolerance abroad. He denounced the Christchurch attacks against a mosque in New Zealand this year but also other attacks against Christians and Jews.

Erdogan also warned the world of the dangers of populism, creating what he called the marginalization of minorities, especially Muslims in the Western world, and intolerance toward refugees and migrants. Instead, he asked for more “inclusive and tolerant public rhetoric.”

Macron, trying to impersonate a Napoleonesque figure on the world scene, has plunged himself into bringing conflicting parties to talk to each other. Stepping up as the world’s defender of multilateralism and the Amazon, Macron seized the spotlight to speak of finding peace through a new type of multilateralism.

“I don’t believe in miracles,” he told the General Assembly, “but I believe we need courage to bring peace.” Courage, he said, is required in two areas:  making peace and taking responsibility.

Macron even directly addressed Trump’s nationalistic speech at the UN, saying, “Go back to what Trump said this morning, I don’t believe the crisis that we are experiencing can be resolved by turning inward.”

His wife, Brigitte, attended his speech, and Macron left New York Tuesday evening. France’s foreign minister, Jean-Yves Le Drian, is taking over for the rest of the week, hosting meetings on the Sahel region in West Africa on Sept. 25 and, with Germany, on multilateralism on Sept. 26.

PassBlue had access to heads of state and government who attended the annual General Assembly luncheon, hosted by Secretary-General Guterres. India’s Narendra Modi was spotted entering the room, mingling and shaking hands, while his Pakistani counterpart, Imran Khan, looked uncomfortable and restrained, sitting at his table quietly. One thing is sure: They did not want to talk to each other.

Meanwhile, Trump showed up with Vice President Pence and his new ambassador to the UN, Kelly Knight Craft. Trump sat next to Guterres and not far from Chancellor Merkel. Pence mingled and sat with mostly African leaders, including the president of the General Assembly, Tijjani Muhammad. Trump’s table included Jacinda Ardern of New Zealand, Andrzej Duda of Poland, Sahle-Work Zewde of Ethiopia and Abdel Fattah el-Sisi of Egypt.

El-Sisi, for his part, was spending a lot of time talking to Italy’s newly re-appointed prime minister, Giuseppe Conte, at the luncheon. There’s one issue that the two countries definitely both care about: Libya. El-Sisi has asked international actors to stop interfering in the country; while Conte, who talked at the end of the night at the UN General Assembly, asked Trump for help in the country. So Conte and el-Sisi may have discussed Libya. But they could have talked about the great lasagna they had a few days ago. Who knows!

1 thought on “Globalists vs. Patriots at the UN: A ‘Great Fracture’ Revealed”