Americans should know more about the life of William vanden Heuvel, a former United States envoy to the United Nations office in Geneva in the late 1970s. His career of social and political activism has touched on the people of his country on issues ranging from prison reform to school desegregation — but especially on foreign affairs, where vanden Heuvel’s singular passion has been the UN.

In many ways, vanden Heuvel is one of the most vital, if unsung, advocates of progressive foreign policy in America today.

In his just-published memoir, “Hope and History,” vanden Heuvel, now 89 years old, tells the story of a remarkable journey. [Disclosure: the author cites me in his Acknowledgements page.] His tale is the classic American one. His mother, an immigrant from Belgium, a single widow with two young sons, came to the US after the ravages of World War I, settled in Rochester, N.Y., and opened a boardinghouse. There she met another immigrant, a man from Holland, whom she married, and they gave birth to the author.

All this happened during the grave hardships of the Great Depression. As a young man, vanden Heuvel began to develop qualities of scholarly brilliance and, concomitantly, vigorous social activism. By his teenage years, in fact, he was already a person of very pronounced political feelings, especially in his admiration for Franklin Roosevelt regarding his leadership during the devastating economic slump and then the second World War. (So adoring was he of FDR that at age 15, vanden Heuvel managed to sneak into Roosevelt’s burial site in Hyde Park when President Harry Truman was marking the first anniversary of the president’s death.)

Vanden Heuvel’s life sped forward quickly. He enrolled in Cornell University and later Cornell Law School, where he became editor in chief of the Law Review. He accepted an offer from a New York law firm headed by Gen. William J. “Wild Bill” Donovan, to be an associate. Donovan, a Republican, who had run the Overseas Strategic Services during World War II under Roosevelt, was keenly interested in global affairs. In 1953-54, President Dwight Eisenhower appointed Donovan as US ambassador to Thailand and he took vanden Heuvel with him as his aide.

There the two men met and conferred with many key figures from Asia’s troubled but fascinating past — including such individuals as King Norodom Sihanouk of Cambodia and nationalist China’s exiled leader, Chiang Kai-shek. Vanden Heuvel, on his own watch, also learned from his Asian sojourn about the limitations of Western influence in the region in observing France’s failures to hold onto Vietnam against the fierce nationalism of the Vietcong.

In addition, he grew more cognizant of the often-intractable problem of refugees globally. His overseas stay gave him a deeper sense that there was a need for a more realistic US global policy that was tied to a better understanding of foreign cultures and histories.

On his return to the New York, General Donovan drew vanden Heuvel into his work with the International Rescue Committee (IRC). The IRC was formed in 1933 by, among others, Eleanor Roosevelt and Albert Einstein, to rescue refugees from Eastern Europe and the Soviet Union. In 1956, it was called into action to assist after the Hungarian revolution erupted. Some 200,000 refugees suddenly required resettlement. Donovan established a special IRC fact-finding group to assess the uprising and figure out how America should respond. Vanden Heuvel wrote a report for the Committee on the situation — a report that galvanized an outpouring of US assistance for the exiles.

By the 1960s, vanden Heuvel’s activism led him inevitably into politics: first, making an unsuccessful run for Congress, then joining the Kennedy administration as an aide to Attorney General Robert Kennedy. With Kennedy, he established public schools in Prince Edward County to replace those closed down by Virginia segregationists. In addition, he accompanied Kennedy on trips abroad to meet with such figures as British Prime Minister Harold Wilson and President Charles de Gaulle of France, where Kennedy exchanged ideas with the leaders on ending the Vietnam War, which had caused such dismay and anger in the US.

Through these tempestuous times, vanden Heuvel began to gravitate more and more toward viewing the UN — the body that had been created by his hero, Franklin Roosevelt — as the best way to resolve global problems. Almost as an epiphany, in 1977, another Democratic president, Jimmy Carter, appointed vanden Heuvel to be the new US envoy to the European office of the UN in Geneva. There he took on the responsibility of serving as the US delegate to the UN Commission on Human Rights, the US representative to GATT (the General Agreement on Tariffs and Trade) and liaison to the World Health Organization, the International Labor Organization and the International Red Cross, among other agencies. By the end of Carter’s presidency, vanden Heuvel shifted to New York to become the deputy US permanent representative to the UN.

His immersion in UN matters soon became the North Star of his life. After Carter’s defeat, vanden Heuvel left his UN post and focused even more ardently as a private citizen on the organization. Along with other philanthropists in the US, he helped raise funds for the financially stricken World Federation of UN Associations, a nonprofit organization that coordinates the work of more than 100 national UN Associations. His efforts saved it during a troubled financial period. (This feat goes unmentioned in his book.) 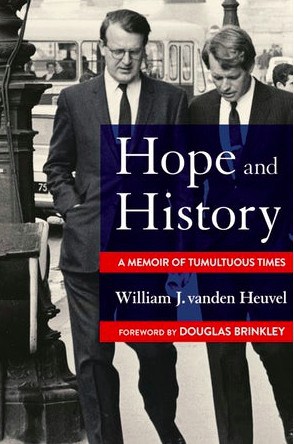 He also spent years collecting gifts and donations to establish the Four Freedoms Park on Roosevelt Island, across the East River from the UN. The park was designed, first, to honor Franklin Roosevelt’s espousal of the Four Freedoms during World War II — freedom from want and fear, freedom of speech and worship — and, second, to commemorate FDR’s role in founding the UN. In yet another UN-related action, he assisted the National Organization on Disabilities to establish a Franklin Roosevelt International Disability Award, which is given annually at the UN to the representative of the country that has made the most significant progress in improving the lives of disabled citizens. The award is the only privately organized one given at the UN, and the secretary-general always attends the ceremony.

Vanden Heuvel spoke out repeatedly about where he felt improvements to the institution could be made. For example, in 2003 — in a speech that he includes in the book — he outlined a 10-point program to enhance the operations of the body. Among other things, he suggested that the UN develop a nation-building agency. That idea, indeed, came to fruition just two years later, via reforms enacted by then Secretary-General Kofi Annan. Vanden Heuvel continued to advocate for the organization in various public ways — delivering lectures, writing op-ed pieces, sending letters and speaking around America. He was not always praiseworthy of the UN. He deplored the fact that the UN has not been able to stop the cycle of wars around the planet.

Still, at the same time, he feared “a sense of fatalism” was settling over the UN because of its failures to live up to the organization’s Charter. Hence his mandate today is “to humanize the United Nations to allow ‘the peoples’ who have created it to participate in building the peace that was promised at its creation.”

Vanden Heuvel has filled his book with numerous speeches, reports and eulogies, all emanating from his capacious life. Some critics may regard these records as filler material to stretch his book out — or a sort of indolence in the writing of this tome. On the contrary, the treatises and texts provide an immediacy to the book’s narrative. And vanden Heuvel makes good use of his statements to write about other facets of his career, for example, a chapter on Roger Baldwin, a founder of the American Civil Liberties Union, or ACLU, who had a signal impact on him; his own work leading prison reform in New York City; his outspoken opposition to the Iraqi war; and other notable undertakings. But his eyes have invariably remained fixed on the UN, which he sees — always unapologetically — as his most cherished mission.

Stephen Schlesinger is the author of three books, including “Act of Creation: The Founding of The United Nations,” which won the 2004 Harry S. Truman Book Award. He is a senior fellow at the Century Foundation in New York City and the former director of the World Policy Institute at the New School (1997-2006) and former publisher of the quarterly magazine, The World Policy Journal. In the 1970s, he edited and published The New Democrat Magazine; was a speechwriter for the Democratic presidential candidate George McGovern; and later was the weekly columnist for The Boston Globe’s “The L’t’ry Life.” He wrote, with Stephen Kinzer, “Bitter Fruit,” a book about the 1954 CIA coup in Guatemala.

Thereafter, he spent four years as a staff writer at Time Magazine. For 12 years, he served as New York State Governor Mario Cuomo’s speechwriter and foreign policy adviser. In the mid 1990s, Schlesinger worked at the United Nations at Habitat, the agency dealing with cities.