Trump’s Misogyny Stands Out During the Impeachment Hearings

Although the first hearings by the Intelligence Committee in the House of Representatives in the Trump impeachment inquiry may be over, one remarkable aspect stands out: the heroic way the female foreign service officers and policy specialists who testified braved raw personal tweets by the president and the White House, often in real time.

Dan Rather said that this showing by women indicated that the US foreign policy community is “no longer” an old boys’ club.

“With all due respect to Dan Rather, the fact that expert and strong women come forward to testify belies the reality that only 30 percent of leadership positions are held by women across the national security community,” Jenna Ben-Yehuda, the president of the Truman National Security Project, told PassBlue.

Women, Ben-Yehuda noted, represented a disproportionate number of witnesses, which is at odds with the limited representation of women in leadership posts.

On “how capable and expert these women are, I personally find it not remarkable for the talent,” Ben-Yehudi said. “The level of expertise is the expectation for the people who serve in these institutions. What is remarkable is how beautifully we have seen public servants demonstrate their expertise before the American people.”

During the hearings, the women who testified were generally praised by the public, while some of their bosses — notably Vice President Mike Pence, Secretary of State Mike Pompeo and (former) National Security Adviser John Bolton — were lambasted for failing to uphold the moral obligation of their oaths to office and to support their own staff.

The positive public sentiment on the women who testified was not echoed by President Trump. He has a record of denigrating powerful — and not so powerful — women.

Remember the chant that echoed around his rallies of “Lock Her Up,” referencing Hillary Clinton? Trump has had more obvious lapses in security than Clinton, including as the testimony showed, engaging in phone conversations on unsecured lines. Even his first United Nations ambassador, Nikki Haley, used unsecure channels while sending official emails.

Speaking at the UN, Trump has repeatedly shown his views of women. In his 2017 inaugural speech at the General Assembly, Trump made only two references to women. The first was to those who have sacrificed for their countries and “fellow citizens”; the second mentioned the Women Entrepreneurs Finance Initiative, his administration’s program to “empower women all across the globe.” In 2018, Trump did not mention women in his annual UN speech.

In 2019, he again presented women as two tropes — as victims, often referring to migrants and refugees, or as successful businesswomen. Ivanka Trump, the president’s elder daughter, advises the women’s entrepreneurial initiative. Even when seemingly empowered, women in Trump’s worldview get relegated to nonthreatening lanes.

Earlier this year, during his conversations with the newly elected Ukrainian president, Volodymyr Zelensky, in July and September — which lie at heart of the impeachment inquiry — Trump ran a campaign torching the career of the US ambassador to the Ukraine at the time, Marie Yovanovitch, who testified on Nov. 15. Trump described Yovanovitch as “bad news.” During the July 25 call with Zelensky, Trump said that she was “going to go through some things.”

Once the hearings got underway, Trump let loose with his Twitter finger. Overall, the men who testified did not receive the same degree of backlash via Trump tweets as the women, with one notable exception.

On Yovanovitch, Trump tweeted what Committee Chairman Adam Schiff (D-Calif.) referred to as witness intimidation, further slandering her career. In one packed tweet, Trump wrote that everywhere she was posted “turned bad,” blaming Yovanovitch for conflicts ranging from Somalia to Ukraine. Trump added that Zelensky had spoken “unfavorably about her,” a statement that transcripts of Trump’s second phone call with Zelensky do not support.

On Jennifer Williams, a foreign service officer who is the special adviser on Russia to Pence, Trump said on Twitter that she should meet with other “Never Trumpers” — despite her respectable White House-based position. Trump also suggested that she read the transcripts for both calls that make up the inquiry. Williams was in the Situation Room listening when both calls by Trump to Zelensky happened. Although she’s still employed, Pence has not stood up for Williams. 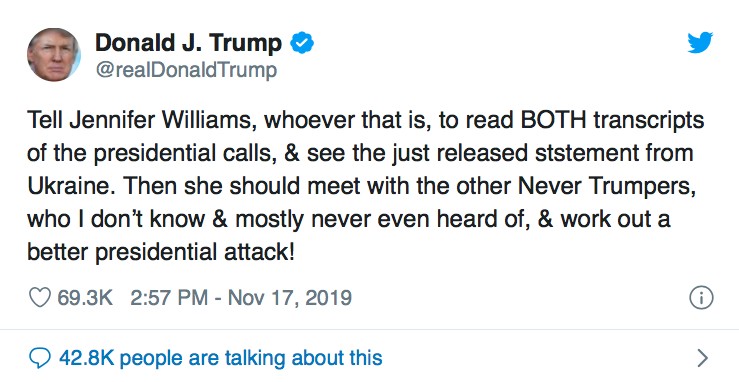 On Laura Cooper, the deputy assistant secretary of defense for Russia, Ukraine and Eurasia in the Pentagon, Trump has remained — so far — quiet. Appearing Nov. 20, Cooper’s testimony was overshadowed by the US ambassador to the European Union, Gordon Sondland, whose colorful testimony monopolized Trump’s attention. Among other statements, Sondland testified that quid pro quo happened and was known to have happened by not only Trump but also by Pence, Pompeo and Bolton, among others.

Trump may have been silent on Cooper because she testified the day that he traveled to Texas, where he visited an Apple factory that has been operating since 2013, but he claimed to be attending its opening. Traveling has not stopped Trump from tweeting before.

On Fiona Hill, who resigned her position as the top Russia official in the National Security Council in July 2019, Trump had relegated disparaging Hill to his personal attorney, Rudy Giuliani. Late in the evening that Hill testified, Giuliani tweeted that she “& her friends ignored blatant Dem corruption” and while “all” will “be revealed very soon,” Hill was making “false allegations” against Giuliani.

By the time Hill finished testifying, Trump’s personal twitter account had begun its late-afternoon and evening practice of retweeting Republican politicians and Fox News clips. The day of Hill’s testimony, Trump met with Republicans to plan an impeachment trial strategy, which might have contributed to his silence on Twitter during Hill’s testimony. By Friday morning, Nov. 22, a fresh batch of tweets appeared on the White House account and Trump’s personal account, attacking politicians and the impeachment process.

An honorary mention goes to Lt. Col. Alexander Vindman, director for European Affairs for the National Security Council. Vindman was the recipient of disparaging tweets by the White House official Twitter account, which stated that Vindman’s boss, Tim Morrison, had “concerns about Vindman’s judgment.” The White House Twitter account, run by staffers paid by American taxpayers, may have violated the federal government’s own social media policy with that tweet.

Ben-Yehuda noted the lack of leadership that came through in the impeachment hearings for career foreign service officers, particularly from Pompeo. “His entire tenure is marred by the total abandonment of people serving under him.”