Normally, the numbers of males and females in a human population are about the same across all such populations. However, pregnancy interventions by couples and unhealthy lifestyles among young men have produced gender imbalances, giving rise to “missing girls” in some populations and “disappearing men” in others.

The coronavirus pandemic will have lasting impacts on the imbalances as well. Preliminary studies in China, Italy, South Korea and the United States find that men are more likely to die from Covid-19 than women. Based on Italy’s experience, the mortality in males seems to be twice that of females in every age group. Among some Western European countries, around 70 percent of those who have died from the virus were men.

The biologically natural sex ratio at birth for human populations is typically around 105 males per 100 females, though it ranges from 103 to 107. With slightly higher death rates for males, gender balance is maintained through childhood and adulthood until later in life, when women increasingly outnumber men.

In the early 1990s, the widespread use of prenatal ultrasound scanning, coupled with a strong cultural preference for sons and policies to reduce fertility levels, increased the abortion of female fetuses in some countries. The result was highly skewed sex ratios at birth, or missing girls, something that had not happened before in human history.

Today, five countries with highly skewed sex ratios at birth show the highest numbers of missing girls, with a ratio of 113 males to 100 females in China and Azerbaijan, followed by Vietnam (112), Armenia (111) and India (110) (see chart below). Over time, skewed sex ratios produce abnormal gender imbalances. 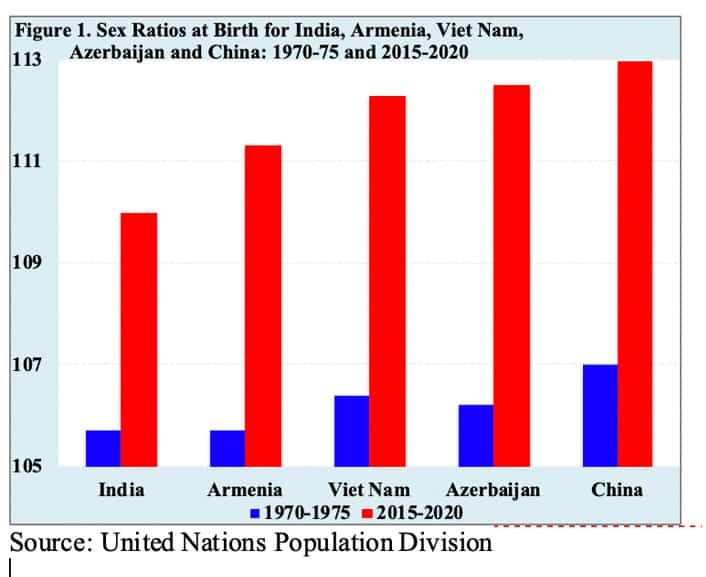 While the gender imbalances in China and India have been well documented for some time, the imbalances in Armenia and Azerbaijan rose to high levels after the countries both became independent in 1991. Again, their strong preferences for sons over daughters and their abortions of female fetuses are transforming the age-sex compositions of the populations of both countries.

In addition to the five countries above, son-biased sex ratios at birth have been reported among East and South Asian immigrants in numerous industrialized countries, including Australia, Britain, Canada, Norway, Sweden and the US. Census and birth registration data confirm that Asian immigrants are still practicing prenatal sex selection to have a male offspring.

In contrast, developed countries experience the phenomenon of disappearing men typically when they begin to reach their mid-30s. The premature deaths of young men are largely the result of unhealthy lifestyles, including excessive alcohol consumption (especially binge drinking), smoking, suicide, cardiovascular diseases and accidents often linked to alcohol. The coronavirus pandemic has only worsened the impact and the death rates of unhealthy lifestyles on the men.

The incidence of disappearing men is most prevalent in five Eastern European countries, all with total population sex ratios of fewer than 88 males per 100 females: Latvia (85), Lithuania (86), Ukraine (86), Russia (86) and Belarus (87). 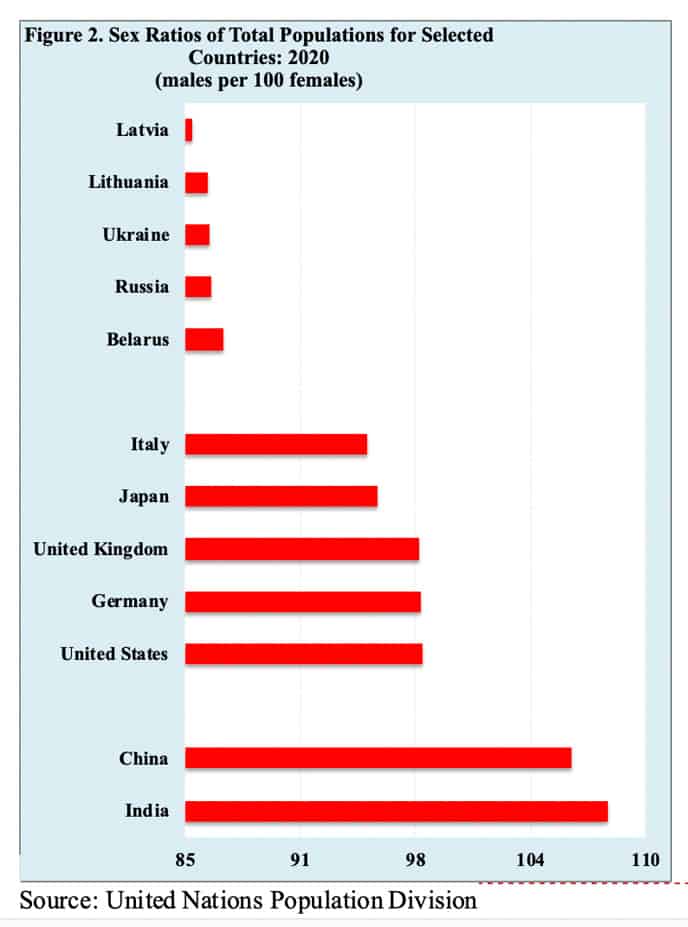 The population sex ratios of China and India are abnormally higher due to their prenatal sex selection, favoring male births over female births. The death rates of young men in countries with disappearing men are much higher than in other developed countries. For example, the probability of a 15-year-old male dying before reaching 50 years old in Russia and the Ukraine is four times the probability in Germany and Britain.

Due to the comparatively high death rates of young men, many of them have disappeared by middle age, resulting in a sizable gender imbalance. The sex ratios by age 50 in Russia and Ukraine, for example, are 87 men per 100 women, considerably lower than the gender-balanced ratio of around 100 observed in most developed countries, such as Germany (102), Japan (102) and the US (101).

Gender imbalances related to missing girls and disappearing men have serious negative consequences for societies and individuals, and they are compounded over time. The gender imbalances at birth become especially problematic when children reach adulthood. Because of the relative shortages of marriageable women, growing numbers of men experience loneliness, encounter difficulties in finding wives and feel frustrated and saddened by being unable to establish families.

Beyond the difficulties of men finding wives, the gender imbalance has societal consequences, including distorting labor markets, driving down consumption and artificially inflating certain property values. Some experts also contend that the shortage of marriageable women in India and China has led to increased violence, crime, trafficking and prostitution in urban areas.

Disappearing men also creates a serious gender imbalance that begins as early as the mid-30s in countries such as Russia and Ukraine. The problem leaves women with a shortage of available men, which can cause them to stay in abusive relationships or having to navigate early widowhood. The percent of women widowed in marital ages in Russia and Ukraine is among the highest in the world at approximately 20 percent.

Health authorities in China have described the gender imbalance among newborns as “the most serious and prolonged in the world.” India’s Planning Commission has called the imbalance in the sex ratio “a silent demographic disaster in the making.” Government officials in Russia have repeatedly acknowledged the impact of excessive alcohol consumption and binge drinking on the premature death of men.

Various policies have been adopted to address these imbalances. For the problem of missing girls, governments have challenged the cultural preference for sons over daughters, prohibited sex-selective abortion, provided financial incentives and scholarship programs to families with daughters and loosened fertility control policies.

Will countries be able to arrest their population gender imbalances caused by missing girls and disappearing men? It will certainly be difficult to overcome cultural values favoring sons as well as men’s unhealthy lifestyles — now worsened by Covid-19 — while ensuring basic human rights. Even if the phenomenon of missing girls and disappearing men were stopped today, many decades would be required before those populations returned to gender balance.

What really surprises (leaves me thinking about the accuracy) me about these numbers is the ratio Male-Female in countries like Iraq, Afghanistan, and Palestine, where we know that scores of males have been killed in the war.
On the other hand, I wonder what a society like Qatar (with a ratio of 3 males to 1 female) looks like.
But, in general, I would need more evidence to accept all those numbers.

Where can we get the UNPD report cited here?

It’s not a report but here is the source:
https://population.un.org/wpp/Download/Standard/Population/

So, what about all the Indian farmers, mostly male, I guess, that committed
suicide? And, numbers of aborted females must be a difficult number to find
– how many abortions would not be recorded? It seems the disappearing men
might equal the missing girls, and come out even? So the single statistic
of the ratio of men to women would be skewed two ways at once, not to
mention deaths (only women) in childbirth. There is small difference,
statistically, from 95 to 105, and numbers might be inaccurate. Look at how
hard it is to nail down Covid-19 numbers, outside factors and different
“collection systems” of numbers I think make sure numbers doubtful.
Politics of numbers, should I celebrate the rising tide of deaths in U.S.
as that Government creates genocides in Cuba, Venezuela and Iran?