A New Tool Tracks Government Policies Responding to the Pandemic

As the novel coronavirus, Covid-19, plagues the world, a new tool to track and compare how government policies are contending with the pandemic has been introduced by the University of Oxford’s Blavatnik School of Government, in England.

Called the Oxford COVID-19 Government Response Tracker, it is available online at no cost and will be continuously updated “throughout the crisis,” the press release introducing the tracker said. It launched on March 24, and now has data from 93 countries, including Britain, Canada, China, South Korea, Italy and the United States, some of the world’s hardest-hit nations by the pandemic.

The tracker provides data that can help with analysis but the Oxford team is not able to provide analysis of its own at this stage.

The Oxford tool complements a tracker already available from the Johns Hopkins University of Medicine, which continuously tracks Covid-19 cases globally by country, region and sovereignty.

Thomas Hale, associate professor of Global Public Policy at the Blavatnik School and lead for the Oxford project, said: “Our index cannot, of course, tell the full story, but we believe the data we have collected can help decision makers and public health professionals examine the robustness of government responses and provide a first step into understanding exactly what measures have been effective in certain contexts, and why.”

The tracker systematically records government responses worldwide and aggregates the scores into a common Stringency Index. The index allows users to explore variations in government responses and can help specialists and the general public understand whether increasingly strict measures affect the rate of infection and identify what compels governments to carry out stricter or less-strict measures — and whether a government’s response is actually helping to fight the pandemic.

Data is collected from public sources — news articles and government press releases and briefings — by a team of Oxford University students and staff members based across the world. The tracker collects publicly available information on 11 indicators of government responses for comparative purposes and not measures of the effectiveness of a country’s response.

The first seven indicators (S1-S7) are recorded on an ordinal scale; the remainder (S8-S11) are financial indicators, such as fiscal or monetary measures. S1-S6 are also classified as either “targeted” (meaning they apply only in a geographically concentrated area) or “general” (they apply throughout the entire jurisdiction).

The tracker is evolving as data changes from country to country; so far, it is focusing on:

For example, data for school closings show that in some places, all schools have closed; in other places, universities closed on a different time scale than primary schools. While in other countries, schools remain open only for children of “essential workers,” the tracker said.

Generally, countries increase their level of stringency as their number of confirmed Covid-19 cases rise, yet there is significant variation in the rate and timing of this relationship. The chart below compares this relationship for six countries: 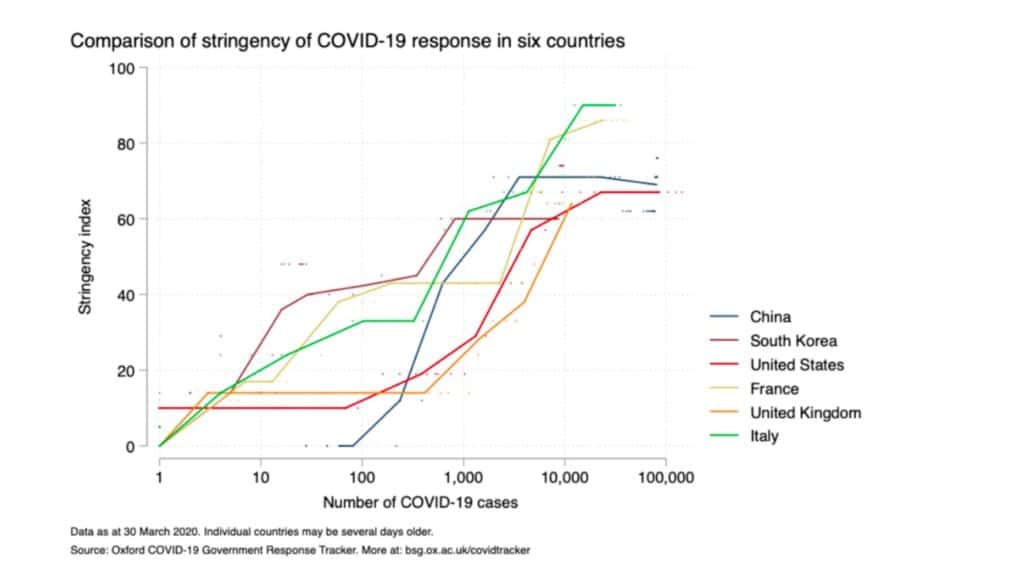 Dulcie Leimbach is a co-founder of PassBlue. For PassBlue and other publications, she has reported from New York and overseas from West Africa (Burkina Faso and Mali) and from Europe (Scotland, Sicily, Vienna, Budapest, Kyiv, Armenia, Iceland and The Hague). She has provided commentary on the UN for BBC World Radio, ARD German TV and Radio, NHK’s English channel and Background Briefing with Ian Masters/KPFK Radio in Los Angeles.

Previously, she was an editor for the Coalition for the UN Convention Against Corruption; from 2008 to 2011, she was the publications director of the United Nations Association of the USA. Before UNA, Leimbach was an editor at The New York Times for more than 20 years, editing and writing for most sections of the paper, including the Magazine, Book Review and Op-Ed. She began her reporting career in small-town papers in San Diego, Calif., and Boulder, Colo., graduating to the Rocky Mountain News in Denver and back in New York at The Times. Leimbach has been a fellow at the CUNY Graduate Center’s Ralph Bunche Institute for International Studies as well as at Yaddo, the artists’ colony in Saratoga Springs, N.Y.; taught news reporting at Hofstra University; and guest-lectured at the Columbia University Graduate School of Journalism and the CUNY Journalism School. She graduated from the University of Colorado and has an M.F.A. in writing from Warren Wilson College in North Carolina.