SINGAPORE — Singapore now has the highest number of Covid-19 cases in Southeast Asia, at 11,178, as of April 23. The daily coronavirus infection rate reached a new high of 1,426 as I write. Just over a month ago, Singapore, with 5.7 million people living in the limited space of 720 square kilometers (278 square miles), was praised for its response to the pandemic.

My city-state is known for its world-class health system, public housing, infrastructure and effective governance. The government and our public institutions learned from their coordinated, collective response to the SARS epidemic of 2003, and the situation seemed fully under control regarding Covid-19. So what happened?

I had returned to Singapore from Thailand and Malaysia to take care of my aging relatives because of Covid-19. Malaysia, where my daughters live, was beginning to experience its worse coronavirus outbreak due to the tabligh gathering attended by 16,000 people in February. I crossed the border in mid-March just before Malaysia announced its lockdown.

When I arrived in Singapore on March 15, it was on top of the outbreak, with only 226 confirmed cases. The government had instituted strict border controls to keep imported cases out. It had effective cluster-and-contact tracing systems in place with strict quarantine and “stay home notices.”

Our doctors and front-line health workers labored around the clock, attending to the infected and keeping death rates low. Our leaders used a “whole of society” approach and communicated constantly with the public. The government was fully aware of the economic and social crisis brought on by the pandemic and wanted to prevent a crisis within a crisis.

Three generous Unity, Resilience and Solidarity budgets of $59.9 billion were rolled out to families, low-income households, small businesses and the self-employed, employers and their businesses, to support the vulnerable and enable the socioeconomic conditions to bounce back after this unprecedented crisis.

Despite all these efforts, the invisible virus attacked our society at its weakest links and made visible those whom we depended upon but had undervalued and forgotten. Singapore is highly dependent on foreign labor for its prosperity, for the building of its infrastructure and for many essential services. As the borders between Singapore and Malaysia shut, with movement controlled by the Malaysian government, thousands of migrants crossed the causeway into Singapore from Johor, one of the busiest border crossings in the world, with 350,000 travelers passing the checkpoints daily.

Too many migrant workers who crossed the border every day found themselves stranded and homeless as the cost of even the cheapest room was far too expensive for them. The Singapore government, civil society and employers did their best to provide temporary shelter and food.

But this was not the reason for the surge in local transmissions. There was another equally large group of migrants workers, mostly construction workers from South Asia, even more forgotten, housed in tightly packed dormitories. Many of us over the years had advocated for better working and living conditions for migrant workers, to little avail, as this would increase the cost of foreign labor for employers.

The situation needed a wake-up call from Prof. Tommy Koh, a former Singapore ambassador to the United Nations, who wrote in his widely shared Facebook post recently:

“The government has allowed their employers to transport them in flat-bed trucks with no seats. They stay in overcrowded dormitories and are packed likes sardines with 12 persons to a room. The dormitories are not clean or sanitary. The dormitories were like a time bomb waiting to explode. They have now exploded with many infected workers. Singapore should treat this as a wake up call to treat our indispensable foreign workers like a First World country should and not in the disgraceful way in which they are treated now.”

The Singapore government has taken serious action to deal with the confirmed cases in the dormitories and the rising infections among foreign workers. Its interagency task force has transferred workers to alternative living areas from the dormitories, particularly foreign workers in essential services, and also carried out a medical-support plan at all dormitories. The task force has also deployed support teams to all foreign-worker dormitories to work closely with dormitory operators to set up medical facilities for massive screening and testing and quarantine centers; to bring in supplies and food; and to manage lockdowns, logistics and housekeeping.

Prime Minister Lee Hsien Loong has taken personal responsibility, saying: “We are paying close attention to the welfare of the foreign workers. . . . They have played an important part, building our HDB flats, Changi Airport, MRT lines. . . . We will provide them with the medical care and treatment that they need.”

He added that he will ensure that employers pay workers their salaries to remit money home. (HDB flats refer to public housing by the Housing Development Board; MRT lines refer to Mass Rapid Transport.)

Singapore has paid a heavy price in the crisis because its thinking on public health and Covid-19 management did not integrate the migrant population from the start. But Singapore is not alone in the recent spike of cases. The world is entering an extremely dangerous period, currently with at least 2.6 million cases. The United States and major European countries are the epicenters. The virus knows no geographical or political borders, political systems or ethnic, class and religious divides. It does not discriminate, and hits everywhere and everyone. Global action and partnership are so vital now, to deal with the global pandemic and its aftermath.

We need to raise the bar for economic, social, environmental and gender justice to shape a post-Covid world that will be better prepared to prevent a medical crisis from turning into another human tragedy. My hope is that this pandemic will force a profound mind-set change for people and our planet.

This essay is part of a series of people working in international affairs relating their experiences during the pandemic from across the globe. The first essay was written from Vienna, Austria, and the second, from Chicago. 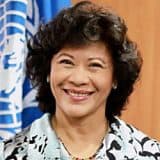 “Migrant workers” are just like the “slaves” that Greeks and Romans had 2000 years ago. We (the worlsd) abolished slavery years ago, but migrant workers are an important pert of the economy in Canada and USA. In Canada, the spring planting season usually has workers from the Caribbean coming to start the season and staying on until the harvest, when they return to their homeland, never being considered as Canadian citizens, just “borrowed labor” because rich (comparably) Canadians just don’t do that sort of work. Cargill, a meat processing plant in Alberta, is mostly staffed with Phillipinos, rooming together, who have fallen ill with Covid. The close elbow-to-elbow work conditions a perfect spreader amid another “class” employment system, including “chicken catchers” all sorts of jobs that the “entitled” classes just don’t do, and we (entitled middle class) hire “cheap outside help”, really, like slaves. And we have depended on cheap labor to provide cheap “stuff” and that is the oppressors beating the oppressed since Cain and Abel – nothing has changed – human “compassion”??? Ha ha ha…