Will the Coronavirus Leave Joe and Kelly Craft Homeless? Maybe the Fed Can Help

A year ago, Kelly Craft was serving as Washington’s frequently absent ambassador to Canada, soon to be en route to the United Nations. Her spouse, the coal baron Joseph Craft III, was knee-deep in a Trump administration assault on federal rules aimed at safeguarding the environment, slowing climate change and protecting miners and other breathing Americans from the illnesses, injuries and deaths linked to the burning of coal.

What a difference a pandemic can make.

The Crafts were reaping the rewards after showering Trump and numerous other Republican political candidates with millions in campaign contributions during the 2016 election cycle. The good times were rolling because Joseph Craft’s work eliminating those regulations was driving up coal sales and the value of the coal under his control as the chairman, president and chief executive officer of mining giant Alliance Resource Partners.

Alliance, a publicly traded diversified energy firm, is the second-largest coal producer in the eastern United States, with about 1.7 billion tons of reserves in Illinois, Indiana, Kentucky, Maryland, Pennsylvania and West Virginia.

On May 14, 2019, Alliance Resource Partners stock was trading at $18.53 a share. The Crafts’ estimated net worth at the time, amounting to more than a billion dollars, mostly in energy stocks, was so vast that Kelly Craft was barred by a federal ethics agreement from participating in climate change matters when she became UN ambassador last September.

Fast forward to May 13, 2020, just months after the pandemic struck, and a share was selling at $2.89 — about 84 percent of its value having evaporated.

Joseph Craft is the beneficial owner of more than 19 million shares of Alliance Resource, or 15 percent of the total outstanding, according to the company’s annual report for 2019. That means the value of his holdings fell by more than $300 million over the past year.

Wall Street, while uncertain about the future of the coal business, seems to favor a rosier future for Alliance. Analysts are playing down the danger of the company going belly up, saying it appears to be holding on to its customers and existing contracts even as other coal producers find themselves in worse shape.

But behind the scenes, Alliance also appears to be looking to its friends in the Trump administration for a helping hand.

In other words, having spent a lifetime fighting government interference in the marketplace, Craft thinks that when it comes to the money in his company’s pocket, it’s time for the government to pony up.

Soon after the crisis hit, the mining industry, in which Joseph Craft is a leading figure in Washington, won a valuable ruling from the federal Department of Homeland Security, which concluded in late March that coal was an essential industry, “critical to ensuring the reliability of the electrical system” and thus “critical to public health and safety, as well as economic and national security.”

The decision enabled the entire coal-supply chain to continue to fully function during the coronavirus outbreak — while most of America’s economy was shut down, sending millions into unemployment lines.

Alliance has also joined a National Mining Association drive to reduce mandatory industry payments to federal programs aiding coal workers sick with black lung disease and cleaning up the polluted sites of abandoned coal mines. The government has yet to act on this request.

Alliance has also won support from 11 Republican senators — two of whom it has given campaign contributions — for a proposal to help Alliance raise precious capital more easily by weakening Federal Reserve Board requirements on bond ratings.

That plan came in an April 21 letter to Treasury Secretary Steven Mnuchin and Fed Chairman Jerome Powell. In normal times, energy companies can raise capital in the financial markets by selling corporate bonds. The companies pay interest to bondholders until a bond’s due date, at which point they pay back the bond’s full value. But plummeting stock and energy prices have driven down the ratings on energy sector bonds, making this a tough sale.

So the Treasury and the Fed devised a plan for the Fed to buy up the bonds of energy companies with ratings as of March 22 that, while weak, would leave the Fed confident it would get its money back when the bonds reach maturity.

The problem for Alliance: Two of the three Wall Street organizations rating the quality of its bonds since the pandemic hit categorized them as junk bonds; the third rated them just above junk quality.

The 11 senators, without mentioning Alliance’s name, asked the Fed and the Treasury to alter the rating requirements in two ways that would benefit Alliance’s case for inclusion in the bond-buying program.

The senators said that March 22 was too late a date to look at ratings, as energy companies were “already reeling” from the pandemic in the wake of a price war between Russia and Saudi Arabia that sent oil prices dropping to drastic lows.

“Our energy producers should not be unfairly excluded from credit due to an arbitrary date, and their viability should be protected with enhanced support for their credit and access to capital,” the senators wrote.

They also “pushed back on the Fed’s requirement that companies that have been assessed by multiple credit rating agencies receive an investment grade from at least two of those agencies,” the blog Red Green and Blue reported. “This would benefit coal firm Alliance Resource Partners, which just barely earned an investment grade rating from Fitch, but received a junk rating from Moody’s and S&P.”

Two of the letter’s 11 signers, Republicans James Inhofe of Oklahoma and Steve Daines of Montana, received campaign contributions from either Joseph Craft or an Alliance political action committee or both.

How shaky is Alliance? The US Energy Information Agency predicted on May 12 that US coal consumption would drop 23 percent to 453 million short tons in 2020, mainly due to low natural-gas prices and a 24 percent decline in electric power consumption that will hit coal-fired plants the hardest. The growing generation of energy from renewable sources is also cutting into coal sales, the agency said, forecasting a 25 percent drop in coal production for the year.

Alliance has responded to the crisis by shutting down production at its Illinois Basin Mines and working at reduced levels. It also suspended dividend payments for at least the first half of the year and cut back on capital spending and operating expenses. While withdrawing previous market forecasts, it said it expected total 2020 sales to tumble 25 percent below its initial expectations.

Having contributed a colossal combined gift of $721,200 to the Trump Victory Fund political action committee at the end of 2019, are the Crafts now sorry they didn’t hold onto that money?

In fact, Joseph Craft sounds confident these days about his company’s odds of survival. And if everything else fails, they still have a rent-free place to live at least until January 2021: the UN ambassador’s official residence, a 6,000-square-foot Manhattan penthouse with breathtaking views of the East River. Although Kelly Craft has been working since March or so — when the lockdown was enacted in New York City — from Kentucky.

3 thoughts on “Will the Coronavirus Leave Joe and Kelly Craft Homeless? Maybe the Fed Can Help” 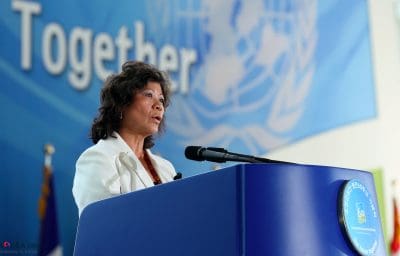