An almost empty General Assembly Hall, masks of all types and colors and diplomats rejoicing to see their colleagues that they probably have seen only on their computer screens for months marked this year’s General Assembly elections at the United Nations.

On June 17, Norway and Ireland won the two open seats on the Security Council for the 2021-2022 term, in a highly competitive race among the Western European and Others Group (Weog), leaving Canada in third place. India and Mexico won the seats for their respective regions, Asia-Pacific and Latin America-Caribbean, running unopposed.

The race is still open for the African seat, between Djibouti and Kenya. In the tally on June 17, neither country got the necessary two-thirds’ vote, or 128 ballots. (Djibouti won 78; Kenya, 113.) A second round of voting is scheduled for June 18 to call a winner between Kenya, an Anglophone powerhouse in Africa, and tiny Djibouti, a Francophone nation.

[UPDATE: Kenya won the second round of balloting for the African seat, receiving 129 votes and Djibouti receiving 62. The winner needed 128 votes, or two-thirds majority, to succeed.]

The UN’s members also elected a Turkish diplomat, Volkan Bozkir, as president of the 75th session of the General Assembly. Bozkir, who ran unopposed, received 178 votes and 11 abstentions. Recently, Armenia, Cyprus and Greece tried to block his candidacy, in an apparently unprecedented move. The president serves a one-year term, starting in mid-September, and the office rotates among the five regional groups of UN member states; in this case, from Weog. Bozkir is a former minister of European affairs.

Initially, Tijjani Muhammad-Bande, the current president of the General Assembly, suggested the election could be held by silent procedure, but Armenia, Cyprus and Greece asked to hold a secret vote instead.

In a letter they sent to Muhammad-Bande, they argued that countries leading the General Assembly should be exemplary in their compliance with norms and values of the UN. “Turkey threatens peace and security in its entire region by constantly violating the Charter of the United Nations and international law,” they wrote.

“It is for these reasons that our delegations object to the election of Mr. Bozkir by silent procedure and requested that the election of the President of the General Assembly be held by secret ballot,” they added. Bozkir needed a simple majority, or 90 votes, to win.

The method of Wednesday’s overall elections were also unprecedented at the UN: each country had a specific time slot in which to cast their secret ballots, from 9 A.M. to 1:30 P.M., in the General Assembly Hall. While the diplomats waited their turn outside the UN’s VIP entrance to go in, they practiced a relaxed form of social distancing. The voting process went smoothly, and the results were announced by Muhammad-Bande by 4 P.M., live-streamed. During the day, diplomats took over their social media accounts to show off their different types of personal protective equipment — masks and gloves — which are required inside the UN headquarters and throughout New York City in the current lockdown phase during the pandemic.

The most closely watched race was the Weog camp’s, vying for its two open seats in the Security Council. Norway and Ireland as well as the other new members will have to help the Security Council contend with a growing list of current and post-pandemic issues.

As Mona Juul, Norway’s ambassador, said after the election, that although the Council is paralyzed, her country is “used to working on all sides,” including with all five permanent members (Britain, China, France, Russia and the United States). Norway, for example, can try to “lower the tensions” among those members, she said.

Norway, a strong contender from the start of its years-long campaign, won 130 votes, coming close to the required 128. It will be Norway’s fifth term on the Council.

Ireland, another small country, won 128 votes, and presumably had the full support of the European Union. In its campaign, Ireland said that it spent half the amount — around $800,000 as of November 2019 — that Canada said it invested in its race. Norway campaigned on a transparency ticket, saying it had spent $2.8 million as of March 2020. For a slogan, Norway called itself “a consistent partner.”

Ireland tried to stand out as a country that may be in the middle of the North Sea but is very much a member of the European Union, and it promoted its special touch to diplomacy as a “neutral” but formerly colonized nation.

Ireland’s Taoiseach, or head of government, Leo Varadkar, said in a press conference on Wednesday evening, “Our turn to the UNSC is a recognition of our work on the world stage for many decades.”

Geraldine Byrne Nason, Ireland’s ambassador to the UN, said as well: “Over the last fifteen years, Ireland has worked tirelessly to convince our fellow member states that Ireland could be trusted with the responsibility of representing them at the Security Council in 2021-22. Today, they have decided that the principles and values that we based our campaign upon are those that are shared by the General Assembly. We take this responsibility incredibly seriously.”

According to one diplomat, Mary Robinson, an ex-president of Ireland and former UN high commissioner for human rights, was active in Ireland’s campaign in the last weeks. The Taoiseach recognized her work throughout the effort.

The victory of Norway and Ireland also means that two female ambassadors will join the Security Council in January. Now there are only two women among the Council’s 15 members: Kelly Craft of the US and Inga Rhonda King of Saint Vincent and the Grenadines. It is impossible to say whether Craft will be ambassador next year, given the US presidential election is in November.

Despite Prime Minister Justin Trudeau’s promise in 2015 to bring Canada back to the international scene, Canada lost its bid for the Security Council for the second time in 10 years, attracting 108 votes on June 17. The last time it lost the race, it was competing against Germany and Portugal for two seats. The defeat this year was humiliating for Canadian diplomacy. 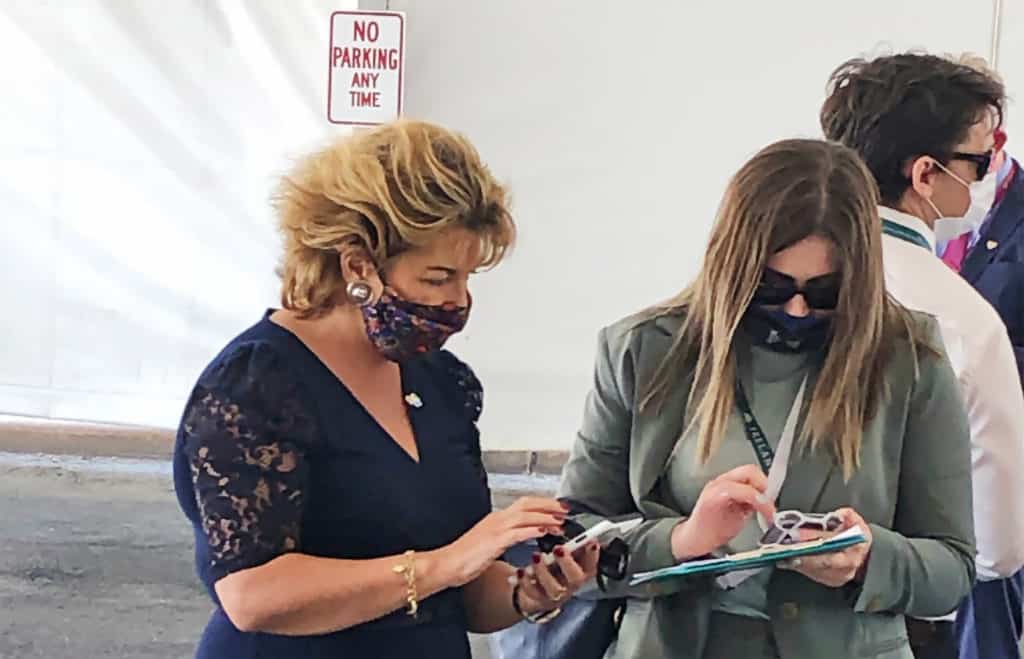 Geraldine Byrne Nason, left, Ireland’s ambassador, in the area at the UN where diplomats waited to go inside the building and vote in General Assembly elections, June 17, 2020.

“The result may not be the one we have hoped for, but we are proud of the campaign we have ran over the last four years,” Canada’s foreign minister, François-Philippe Champagne, said in a press conference after the June 17 vote.

According to a diplomat who was also at the UN in 2010, Canada lost then mostly because of its closeness to Israel, alienating other countries in the Middle East. Experts also talk about Canada’s lack of engagement in Africa. Champagne, who was in New York to cast Canada’s ballot in the General Assembly, declined to comment on what region or countries might have turned their back on Canada.

The European Union lost a member early this year on the Council — Britain — after Brexit was done; Ireland will replace Germany and Belgium, who both end their terms in December. That leaves France and Estonia, or a total of four members of the European Union. Norway is not a member.

“The positive result for Ireland is a positive result for Europe,” Olof Skoog, the European Union’s ambassador to the UN, told PassBlue. “It is in our collective interest to have as many EU Member States as possible on the Security Council, and we wish Ireland every success.”

Shaking the status quo in Africa

Another closely watched race has upset the African group, in which Djibouti decided to shake up the bloc by challenging Kenya as the African Union-endorsed nominee.

According to one African diplomat, Djibouti was endorsed by the international organization of La Francophonie. Normally, the African Union agrees on a candidate and the election goes uncontested, but Djibouti decided to change the rules of the game this year. The method to declare Africa’s winner, through a second round of voting on June 18, repeats the day’s before. But the number of votes to succeed will depend on how many ballots are cast.

India was last on the Security Council in 2012 and will carry out its eighth term in 2021-22, replacing Indonesia. With the state of geopolitics, India’s tenure — and its allies — will be tracked closely.

As Richard Gowan, a UN expert at the International Crisis Group, said: “With Sino-Indian relations souring, India could well shift closer to the Americans this time around. I do not think that means that India will simply follow the U.S. lead at the UN on all issues. The Indians still take their relations with other NAM [Nonaligned Movement] states on issues like peacekeeping seriously. But if China and the U.S have more big fights in the UN in future, India could be a pretty significant swing voter.”