Germany is anticipating two milestones between now and Dec. 31 — make that three. On July 31, its monthly rotating presidency of the United Nations Security Council ends, and on Dec. 31 its two-year stint on the Council is over. Meanwhile, Angela Merkel has said she will not seek re-election as German chancellor in 2021, giving her country about six months to shape its legacy at the UN under her leadership.

“There’s no doubt that the UN — multilateralism in general — is at a critical juncture,” Christoph Heusgen, German ambassador to the UN, told PassBlue. “There are developments around the world where countries don’t put multilateralism at the top of their agenda, and you have more populism and nationalism. I think it’s the task of countries like France and Germany, which in history went through these periods and witnessed what that can lead to, to remind fellow members of the Security Council of the need to lead the multilateral approach to success.”

Germany is also president of the Council of the European Union, in Brussels, for the next six months and a key voice in Europe on the Covid-19 pandemic, making Germany even more likely to push for international cooperation.

Some of the signature events on its Security Council agenda for July may face pushback from some veto-holders. The agenda includes open debates on pandemics and peace and security; peacekeeping operations and human rights; accountability for conflict-related sexual violence; and climate and security. In fact, Germany is said to be lobbying for a Council resolution on climate security.

“This resolution is trying to establish a special envoy position on climate change and security, to keep this central topic on the Security Council’s agenda,” Patrick Rosenow, editor-in-chief of the journal German Review on the United Nations, told PassBlue. “It’s very important, even though there is a lot of resistance to the concept by member states, such as Russia and China.”

The Council, which continues to meet online, is encountering resistance on the issue of climate change and security from not only China and Russia these days, of course, but also the United States.

“We don’t believe that if there are some countries that may not like it, we should give up,” Ambassador Heusgen said. “When they see there are 10 countries in support, then we put them a bit on the defensive and see how far we get. But to give up and not try, this is not an option for us.”

Germany will also have to keep the support of the 2015 Iran nuclear deal going as the US has asked the Council to extend the Iran arms embargo in the resolution that endorsed the Joint Comprehensive Plan of Action (JCPOA).

“The best way for the Security Council is to abide by the rules-based international order and implement the agreements that have been reached,” said Heusgen, who criticized the US at a June 30 Security Council meeting for abandoning the Iran deal in 2018.

As president in July, Germany is also trying to ensure with some other Council members that the mandate allowing two cross-border aid channels from Turkey into Syria is renewed. Russia has already been saying no to the mandate, which expires on July 10. 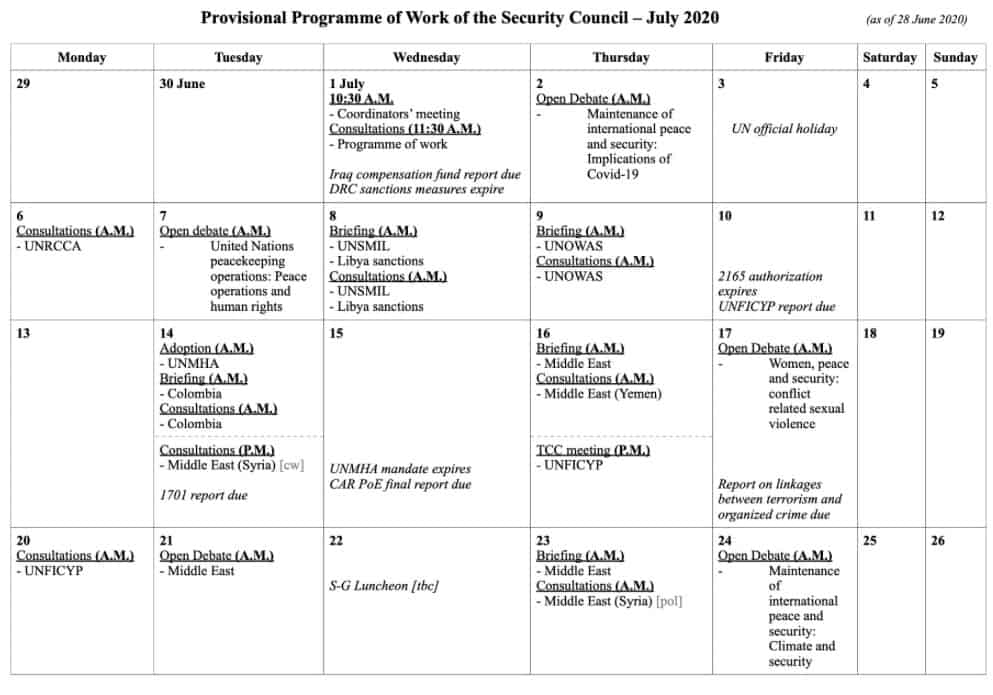 The provisional program of work, above, for the German-led UN Security Council in July.

Each month, PassBlue profiles UN ambassadors as they assume the Council presidency. To hear more on Germany’s goals in July, with insights from Patrick Rosenow, download the latest episode of PassBlue’s UN-Scripted podcast series on SoundCloud or Patreon. (Excerpts of the podcast are below.)

Education: Bachelor’s and master’s degrees and a Ph.D in economics from the University of St. Gallen, Switzerland; postdoctoral research at Sorbonne, Paris.

His story, briefly: Heusgen’s final year as Germany’s ambassador to the UN ends in mid-2021, at about the same time Chancellor Merkel’s term ends. After 40 years as a public servant, New York is Heusgen’s last stop-off before retirement.

From 2005 to 2017, he worked closely with Chancellor Merkel as her foreign policy and security adviser and as undersecretary for foreign and security Policy in the German Chancellery. Merkel reportedly offered Heusgen any post in the world afterward, and he chose New York.

“It’s very good to work with somebody who is a scientist,” Heusgen said of his longtime boss. “You could see this by the way she reacted to Covid-19: taking a scientific approach to look at all the angles of a challenge and then come to the right conclusion.”

“I must also say,” he added, “to work for a woman for 12 years was something very special. [As a result] I’ve always been for the promotion of women. In New York, I’m a gender champion. I think women in politics is something wonderful.”

With retirement, Heusgen plans to move back to Berlin, where his wife, Ina Heusgen, a career diplomat, will work for the German government. (She is currently deputy political coordinator and legal adviser to the German mission to the UN.)

“I think Germany did a good job on the international scene, and to have been part of this and having had the chance to work in the background . . . is something I’m looking back on with a certain pride,” Heusgen said.

Heusgen was born in Dusseldorf, in northwestern Germany. The son of two pharmacists, he was raised in the neighboring city of Neuss. After studying in Switzerland, France and the US, Heusgen went to work for the German foreign service, taking up his first post in press and economic affairs at the consulate general in Chicago, in 1983.

Next, he served at the German embassy in Paris before returning home to work at the Foreign Office headquarters in Bonn, where he became private secretary to the coordinator for German-French Relations. (The capital moved from Bonn to Berlin in 1990, after reunification.)

Heusgen also served as deputy head of the special section in charge of negotiations of the Treaty of Maastricht, from 1990 to 1992, and worked in diverse positions focusing on European Union-German relations until 2005. Heusgen has four children.

He talked to PassBlue on June 29. His remarks have been edited for space and clarity. (He also spoke to the media on July 1.)

Are there specific achievements you’d like to highlight regarding your two years on the Council? We had the presidency last year, where we adopted the resolution on sexual violence in conflict, which was highly debated. In retrospect, I’d say we are very happy that we were able to come up with a resolution and put this up on the agenda of the UN.

The second one is human rights. We believe that it’s very important to continue to keep human rights on the agenda. The United Nations was founded on the idea of human rights. The Universal Declaration of Human Rights is one of the founding documents [and it’s important] to look at the individual person, to look at individual victims and conflict, and to always remind delegations that we are working for the people who suffer. Germany, for instance, together with Belgium [and Kuwait], presented a resolution to allow UN and other humanitarian aid to get into Syria to help people suffering under this conflict. To get humanitarian aid is something that for me is very important.

Do you share French Ambassador Nicolas de Rivière’s concern that the Security Council is facing a stalemate analogous to the Cold War? In the European Union, there are ups and downs, but we can be proud of how multilateralism in the 75 years since the second World War has worked. When you look back, before the end of that war, there were three other big wars. The European idea of multilateralism — that you resolve conflicts not with force but with the rule of law, with the European Court of Justice — is something we want to continue to try and promote here at the UN. This is a task you face every day, and when you see that other countries in the Security Council . . . don’t believe actually implementing the resolutions of the Council is something they should care about, this is a problem. This is why in the Security Council we always remind countries that what we are doing is important, that when we adopt a resolution, it’s legally binding and we better implement what is asked, because if we don’t we create a very bad example, and all of a sudden nobody respects international law and we are going to end up in the jungle.

This article was updated to correct the year when Germany joined the UN and to clarify Ambassador Heusgen’s education history.