Leaders of United Nations peacekeeping operations comprise an important and unique category of high-level officials in the world body. They have a difficult and often thankless job of trying to manage “Christmas tree” mandates handed down by the Security Council while keeping great powers and national authorities happy. Along the way, these leaders enjoy significant leeway in interpreting instructions from the Security Council and UN headquarters. But how are these appointments made?

Our new analysis reveals how a country’s characteristics can affect its chances of getting a peacekeeping leadership post.

Most peacekeeping missions are headed by a civilian diplomat, the special representative of the secretary-general. The head of the military component is the force commander. Like all UN officials, peacekeeping leaders are expected to leave national allegiance behind when they begin their international assignment. They are supposed to be guided by universal UN principles and norms. At the same time, their behavior and outlook may be shaped by their national culture.

National culture can play a positive role in peacekeeping. It can improve communication: for example, Roméo Dallaire, the force commander of the UN mission in Rwanda (1993-1996), reached out to Maurice Baril, a Canadian compatriot and military adviser in the UN’s peacekeeping department, trying to alert New York headquarters to the impending genocide. While the warning did not stop the tragedy, nationality allowed Dallaire to try “opening a [direct] line of communication.”

Nationality can also be an obstacle: cultural distance can create mistrust between civilian and military leaders of missions or between force commanders and peacekeeping troops, as Vincenzo Bove, Chiara Ruffa and Andrea Ruggeri argue in their new book, “Composing Peace.”

Nationality also plays a role in appointments of top peacekeeping officials. Although the UN secretary-general is supposed to make such appointments on merit alone, UN member states jockey to influence the process. They lobby, pressure and induce the UN Secretariat to secure these prestigious posts for nationals of their own country. A citizen leading an important peacekeeping mission can indirectly provide his or her capital with sources of information on the ground and an opportunity to steer the mission’s policy. This spring, the United States declined to support an Algerian candidate for the post of the special representative in Libya, leaving an American, Stephanie Williams, the acting head of the UN mission there months later as the conflict drags on.

Member states compete for important posts UN peacekeeping at all levels, as demonstrated by China’s unsuccessful bid to have one of its citizens named to lead the UN’s peacekeeping department – the position has been occupied by five Frenchmen in a row since 1997.

Media and researchers have noted the politicized nature of special representative appointments, yet systematic data on which countries succeed most at securing these lucrative, influential positions for their nationals have become available just now.

The charts below show that the US has provided the greatest number of special envoys in the post-Cold War period for UN peacekeeping missions in Asia and Africa, while Brazil has supplied the most force commanders. 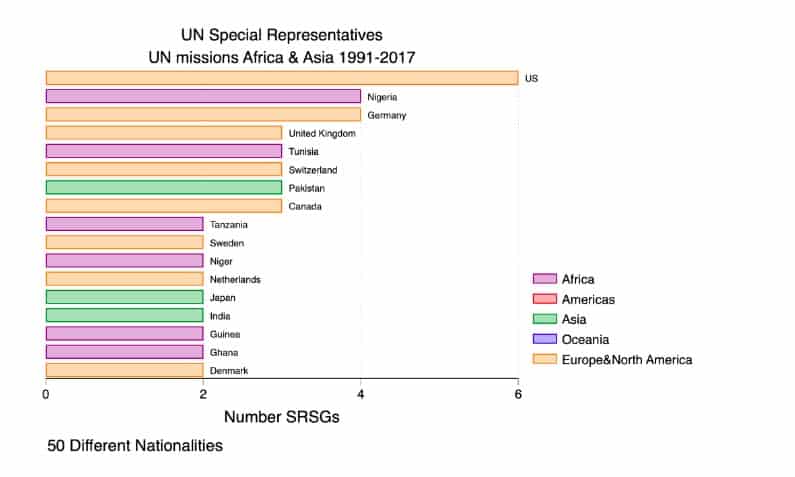 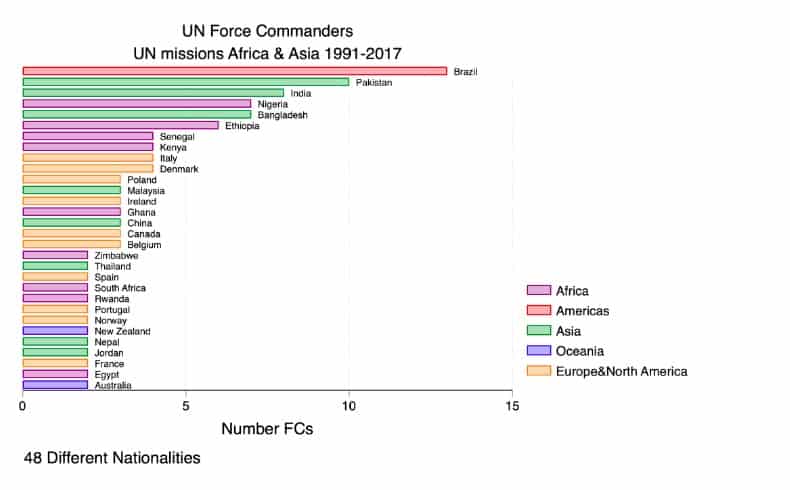 We have analyzed how country characteristics affect the chances of getting a peacekeeping leadership post. A high degree of globalization, major troop contributions to the operation in question and geographical proximity increase a country’s chances of having one of its nationals appointed to lead a UN mission.

We also notice differences. The three permanent Western members of the Security Council — Britain, France and the US — as well as countries that are often elected as nonpermanent members provide more special representatives. Major troop-contributing countries — those that have contributed the most peacekeepers to post-Cold War missions — and countries that are linguistically proximate to the conflict have a better chance of getting the force commander post.

The politicized selection process reveals a stark dependence of the UN Secretariat on troop-contributing countries as well inequalities in the UN peacekeeping governance: the Western globalized countries with a lot of Security Council experience often get the key post of the civilian head of mission, while troop-contributing countries must risk the lives of their soldiers over decades to convincingly claim a military command post. Yet countries that skillfully leverage mission-specific troop contributions can help land both types of posts.

The personal experience of leading a different UN mission in the past does not seem to matter in securing future posts. However, some missions have been led by several people from the same country: a string of Brazilian force commanders in Haiti or Italian force commanders in the post-2006 Lebanon operation come to mind. We call this situation “mission capture” by one nationality, which happens when the leaders’ country makes large troop contributions to an operation.

The importance of the three factors that affect the appointment process — power, recognition of troop contributions and skills — has changed over time. Mission-specific troop contributions have become more important for the special representative and force commander appointments since 1999. By contrast, major overall troop contributors had better chances of getting the latter posts before the beginning of the 21st century. After the 1990s, more force commanders have come from countries that are geographically close to the conflict, as the convention that neighbors should not contribute peacekeepers relaxed.

Finally, the influence of Britain, France and the US over special envoy appointments has increased since 1999, although these countries are practically absent from the ranks of troop contributors.

If the UN’s paymasters, like the US, are so keen on ensuring good performance from peacekeeping leaders, they should allow the Secretariat to select the best person for the job.