US Severs Ties to the WHO, Security Council Vetoes, Counterterrorism Week

In a final straw to the current troubles between the World Health Organization and the United States, the Trump administration notified United Nations Secretary-General António Guterres on July 6 of its withdrawal from the agency, effective July 6, 2021.

But the story may not be over, as Joe Biden, the presumptive Democratic presidential nominee, tweeted: “On my first day as President, I will rejoin the @WHO and restore our leadership on the world stage.”

Just a reminder: It takes just two clicks to listen to our latest podcast episode, featuring Ambassador Christoph Heusgen talking about Germany’s last presidency in the UN Security Council in its current term. Check out our episode on the UN’s 75th birthday, too, packed with a fascinating range of voices, like Carol Bellamy, a former head of Unicef and New York City politician, on what she thinks is the most valuable part of the UN.

Please donate to PassBlue to ensure that we keep covering the most important stories at the UN — Covid-19, the US and other big powers, women’s issues and human rights — and that we hold the UN to account for another 75 years. — Editors

• For PassBlue’s monthly Security Council Presidency column, Stéphanie Fillion reports on Germany’s ambitions for July, including pushing for the UN to appoint an envoy on climate change and security.

• The spokesperson’s briefing mentioned, among other things, the new UN-African Union Justice and Confidence Center, located in an internally displaced person’s camp in South Sudan. Also:

• Covid-19: In the Dominican Republic, which has 37,000 confirmed cases of the virus, the World Food Program has provided food to more than 11,000 children. The UN is also working with the government to help migrants on the border with Haiti.

• Cristina Duarte of Cabo Verde has been appointed UN special adviser on Africa.

• The UN opened its first virtual counterterrorism summit, from July 6-10, subbing for the annual counterterrorism review, which was postponed because of Covid-19. The theme is the challenges of counterterrorism operations in the pandemic. At the opening, Guterres said it was too early to assess the effects of Covid-19 on terrorism but that: “We know that ISIL, Al-Qaida, their regional affiliates — as well as neo-Nazis, white supremacists and other hate groups — seek to exploit divisions, local conflicts, governance failures and grievances to advance their objectives. . . . ”

On July 10, a Turkish court ruled that the Hagia Sophia, which was first a church but became a mosque in 1453, must revert to a mosque. In response, Unesco said it “deeply regrets the decision of the Turkish authorities, made without prior discussion, to change the status of Hagia Sophia.” 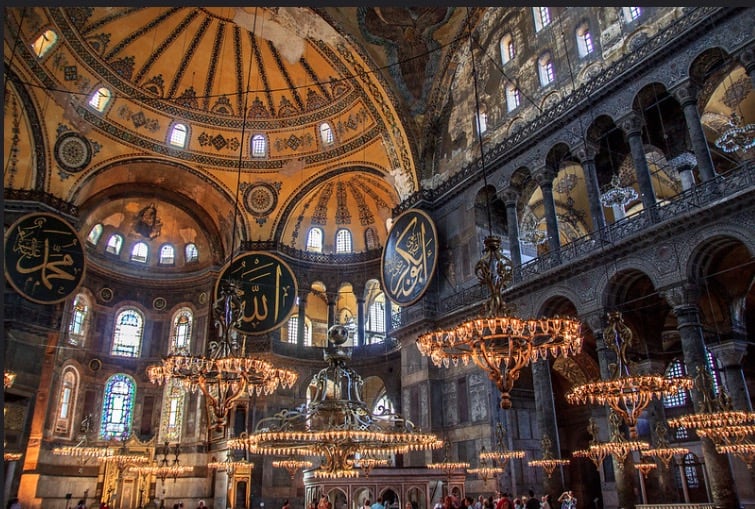 • The investigation by the UN Office on Internal Oversight Services into a sexually graphic video continues. The video involves what appears to be a woman with two men in a UN vehicle in Tel Aviv; the men have been identified by the UN as international civilian officers from the UN Truce Supervision Organization (Untso).

Information on leadership of Untso is scarce on its website, but Alan Doyle is the officer in charge “until a new head of mission is appointed,” the mission’s senior adviser, Judy Hylton, told PassBlue. Doyle, an Irish national, has held the post since November 2019. Stéphane Dujarric, the UN secretary-general’s spokesperson, told PassBlue that “consultations with concerned member states are continuing” to choose a mission chief, not elaborating.

Hylton also said she could not name the nationalities of the two civilian officers, who have been put on administrative leave without pay pending the investigation. The mission is based in Jerusalem and deploys military observers to the UN missions in Golan and South Lebanon and maintains offices in Egypt, Lebanon, Syria and Jerusalem. Untso is the UN’s original peacekeeping mission, established in 1948 to supervise a cease-fire between the newly independent nation of Israel and Palestine.

• Barbara Crossette reports on the possible downside of the United States nearly cornering the global supply of remdesivir, a drug that has been proven to shorten the recovery from the new coronavirus infection but is not a cure.

• The UN spokesperson confirmed that the US gave notice it was withdrawing from the WHO, but that the US must meet certain conditions to do so, including fully paying its assessed financial dues within a year. For 2020, the assessed amount is about $120 million, of which the US has already paid half. If the US withholds its financial support, it will be illegal under federal law, according to Just Security, a nonprofit online forum online focusing on US national security law and policy. The US has been a member of the WHO since June 21, 1948.

(On July 9, the WHO announced it was setting up an Independent Panel for Pandemic Preparedness and Response to evaluate the world’s response to the Covid-19 pandemic. The panel will be led by Ellen Johnson Sirleaf, a former president of Liberia, and Helen Clark, a former New Zealand prime minister.)

In remarks to WHO Member States, Director-General Tedros Adhanom Ghebreyesus said the Panel will be co-chaired by former Prime Minister of New Zealand Helen Clark and former President of Liberia Ellen Johnson Sirleaf. Prime Minister Clark went to on lead the United Nations Development Programme and President Sirleaf is a recipient of the Nobel Peace Prize.

• During the spokesperson’s briefing, Dujarric thanked South Korea for donating 60,000 face masks to the UN peacekeeping missions in South Sudan and the Democratic Republic of the Congo. Also:

• The High-Level Political Forum on sustainable development began today, addressing the effects of Covid-19 on the Sustainable Development Goals (SDGs) and the 2030 Agenda.

• The Security Council’s vote to reauthorize two cross-border aid openings from Turkey into northwest Syria and reopen another channel from Iraq into Syria for another year was rejected, with 13 yes and two vetoes, from Russia and China. The mechanism expires July 10. The vote elicited tweets from the ambassadors of Russia and the US, respectively:

Russia offered a counterproposal to keep one channel open from Turkey into northwest Syria (Idlib), but that resolution failed in a Council vote on July 8. Belgium and Germany voted against it, saying it did not meet the “basic requirements” requested by the UN and other aid organizations. The voting:

On July 10, another Security Council draft resolution led by Belgium and Germany proposed a reauthorisation of border crossings (at Bab al-Salam and Bab al-Hawa on the Syria/Turkey border) to deliver aid for six months failed again because of vetoes by China and Russia.

Russia counterproposed with a draft resolution reauthorizing only one crossing — Bab al-Hawa (Idlib) — for one year. The draft asked Guterres to report by the end of August the effects of unilateral sanctions on humanitarian deliveries into Syria, an issue that Russia and China have inserted into the negotiations over the numerous cross-border draft resolutions.

By late Friday, July 10, the Russian resolution failed, with only four countries voting yes. (The UN said earlier in the day that it had no options for cross‑border delivery other than a Security Council resolution.) On July 11, a resolution was adopted to extends the cross-border mechanism for 12 months via the Bab al-Hawa point; China, Dominican Republic and Russia abstained.

• A new PassBlue op-ed by three European academics documented how top UN officials in peace operations are chosen: it’s not always on merit.

• The spokesperson’s briefing touched on the Covid-19 situation in Haiti (6,300 confirmed cases), where the UN is helping in various ways; and on Burkina Faso, which now has 2.9 million people who need aid, compared with 2.2 million in early 2020. Also:

• The fighting in Libya is worsening, with foreign interference hitting unprecedented levels, Guterres told the Security Council. He said that certain countries are supplying sophisticated military equipment, including drones, and mercenaries to fight. Guterres pointed out that the Council has still not named a new UN envoy for Libya.

Heiko Maas, Germany’s foreign minister, spoke more forcefully to the Council, saying by live video: “While the entire world closed its borders, ships, planes and trucks with weapons and mercenaries continued to arrive in Libyan cities.”

• The UN announced it was moving into Phase 1 for the New York City headquarters as of July 20, letting up to 400 people to enter the buildings daily, while most UN staffers will still telecommute.

• What’s life in Britain like right now during the pandemic? A mess, says Rhona Scullion, a longtime writer for PassBlue from the United Kingdom. She describes the mishmash of semi-lockdown rules among England, Northern Ireland, Scotland and Wales, as Britain currently has the highest rate of Covid-19 infections in Europe.

• The spokesperson’s briefing discussed, among other things, the Covid-19 situation in Benin, which has 1,200 confirmed cases. Also:

• Guterres released a policy brief on the effects of Covid-19 on Latin American and the Caribbean, calling for a recovery package equivalent to 10 percent of the global economy. He said: “In a context of already gaping inequalities, high levels of informal labor, and fragmented health services, many people in the region are being hit hard by the pandemic. In particular, women, older persons, persons with disabilities, indigenous peoples and refugees and migrants are being impacted at a higher rate.”

• Vladimir Voronkov, head of the UN Office of Counterterrorism, spoke to the media, saying, among other matters, that member states that criticize the office for its heavy financial reliance on Saudia Arabia and Qatar should increase their own donations to improve the balance of power.

He also fielded questions from some reporters, below, on “right-wing” and “left-wing” protests in the US, including whether “terrorists” or “extremists” are involved in the Black Lives Matter movement. Voronkov said that more clarity is needed, but noted that his “reading [of] American press” suggests there is a growing threat of terrorism in the country.

• The spokesperson’s briefing touched on a new World Wildlife Crime report from the UN Office on Drugs and Crime that says wildlife trafficking threatens biodiversity and human health.

• Discussions continue between the 193 member states and the president of the General Assembly, Tijjani Muhammad-Bande, on the format of the UN General Assembly high-level week in mid-September, and final decisions may be cemented by next week. The plan is to still hold a hybrid session of prerecorded speeches by world leaders projected onto a screen in the Assembly Hall and allow a limited number of national delegates physically present. Simultaneous translation of the speeches is expected to be provided.

But some countries want a bigger physical presence, while others want to wait for a final decision to be made in August, with everyone keeping in mind UN medical authorities’ recommendations and advice from New York City officials. Another issue is the deadline for the prerecorded video speeches to be sent to the UN, which needs time to organize them before the big week in September yet must also allow for last-minute changes by world leaders.

The US, the host country of the UN, is probably the least restricted of all member states in coming to New York City. And the possibility of a P5 summit at the UN — with the permanent members of the Security Council (Britain, China, France, Russia and the US) — is out of the purview of the General Assembly.

Dulcie Leimbach contributed reporting to this article. It was updated to include the news from the WHO about a new independent panel assessing the global response to the pandemic.

Allison Lecce is from Chappaqua, N.Y., and a student at Fordham University majoring in international studies with a minor in journalism. She received this year's Fordham College Alumni Association Journalism Scholars Award.