The Security Council held a climate change and security debate, led by Germany, nearly 10 years since the first and last time the Council met on this specific issue and agreed to a presidential statement on it. The Dominican Republic also led a meeting on climate change in January 2019.

Although no resolution was submitted to a vote in the virtual meeting, Germany said that 10 Council members supported its ambitious agenda calling for a United Nations envoy to be appointed on climate change and security, among other goals. (The United States, China and Russia did not support the resolution.)

The Council’s next physical meeting is scheduled for July 28, on Yemen, where Covid-19 is spreading in a country riven by war, arguably the biggest crisis before the Council. The Council met for the first time physically at the UN on July 20, after meeting for four months online.

Greetings from This Week @UN, our summary highlighting the most important news on the UN. The news is drawn from the UN spokesperson’s briefings, our original reporting and other sources. (The column is taking a vacation.)

Just a reminder: It takes two clicks to listen to our new podcast episode, on navigating the journey to a job at the UN, even in a pandemic. Experts like Daniel Naujoks of Columbia University’s School of International and Public Affairs offers advice. (The episode has an accompanying article.)

And don’t miss our recent Sunday book review on Samantha Power’s memoir, “The Education of an Idealist.” Power is a former US ambassador to the UN.

• Barbara Crossette reported on the findings of US Secretary of State Pompeo’s controversial Commission on Unalienable Rights, which is led by a Harvard law professor. The findings devote a section to the UN Universal Declaration of Human Rights, saying its “weaving” of civil and political rights with economic, social and cultural rights “poses a certain challenge for the United States.”

• The spokesperson’s briefing touched on monsoon floods in India and Nepal that left 189 people dead and four million others displaced; Secretary-General António Guterres’s call for maximum restraint in the sudden violence between Azerbaijan and Armenia; and locusts remaining a major threat to food security in East Africa, India and Pakistan as a result of climate change and recent extreme weather events. Also:

• The Egyptian Parliament has approved a military intervention in Libya, while the acting head of the UN mission there, Stephanie Williams, an American, met with Algeria to discuss de-escalating violence. “We are obviously following this extremely closely,” the UN spokesperson said about Egypt’s decision.

• The UN Security Council discussed the UN mission in Cyprus (Unficyp). Germany, which leads the Council presidency in July, said that progress in the two sides resolving their differences in the long-frozen conflict remains stalled, as upcoming elections, “first in the North and then in the Republic next year,” are impeding talks. Germany also said it was “shocked to hear of the first physical attacks against UNFICYP Peacekeepers in 24 years.”

• Guterres presented a New Social Contract to “ensure economic and social justice and respect for human rights” in societies for youth, women and “the most vulnerable populations.” Guterres presented the contract during a speech he gave for Nelson Mandela Day.

• The UN began its first phase of reopening, allowing up to 100 people on a given day to work inside the UN headquarters in New York City, or a total of 400 people entering each day (up to 300 “essential” workers and others have been entering the site during the regional lockdown, the UN said).

• Trying to get a job at the UN has always required a strategy but during the pandemic, it could feel like climbing Everest. PassBlue’s new podcast episode, produced by Stéphanie Fillion and Kacie Candela, features interviews with people who offer practical, timeless advice.

• The spokesperson’s briefing noted the Covid-19 situation in Chad, which has 900 confirmed cases and 70-plus deaths. The UN is assisting the government’s reopening plan, including expanding the capacity of health care centers. Also:

• “We simply cannot allow the coronavirus to threaten the lives and future of women,” General Assembly President Tijjani Muhammad-Bande said in a prep meeting for the 25th anniversary of the Fourth World Conference on Women, in Beijing, on gender equality. The anniversary event at the UN is scheduled to take place virtually on Oct. 1.

• In the Security Council session on the Mideast, discussion was overshadowed by Israeli threats of annexing parts of the occupied West Bank. Nickolay Mladenov, UN special coordinator for the Middle East peace process, said that the Palestinians and Israelis are grappling with containing the spike of Covid-19 cases; related economic devastation; and mounting political confrontation.

Most Council members vehemently oppose Israeli annexation plans, except for the US. Germany, for example, said: “Annexation would severely undermine, if not render impossible, the resumption of direct negotiations between Israelis and Palestinians. Instead, it would bring them closer to a one-state reality.”

• In a plea for global cooperation amid the sweeping crises affecting every human across the world, Giovanna Kuele of the Igarapé Institute in Brazil details how diplomats negotiated a final draft of the UN-75 political declaration to commit to multilateralism and to be adopted on Sept. 21 at the UN. She writes, however: “Given the political climate, the declaration is concise, clear, forward-looking and inspiring. But it is not nearly enough.”

• During the daily spokesperson’s briefing, it was noted that Unicef estimates that 40 million children have missed out on early-childhood education this year because of Covid-19. Also:

• The Covid-19 Law Lab was launched to help countries build legal frameworks for pandemic responses, while protecting human rights and following international law. The initiative was created by the UN Development Program, the WHO, Unaids and Georgetown University’s Global Health Law program.

• In response to a reporter’s question about President Trump’s threat to send federal agents to New York City, similar to the unmarked fed agents he dispatched to Portland, Ore., the UN spokesperson said, “That is not an issue in which we have a dialogue with or need to have a dialogue with it.”

• The US closed the Chinese Consulate in Houston amid intensifying retaliatory moves between China and the US, but according to Stéphane Dujarric, the UN spokesperson, the action does not violate the Vienna Convention and “is a bilateral issue.”

• When asked how diplomacy has been affected by Covid-19, Dujarric said the UN has continued “full throttle” in supporting humanitarian and peacekeeping projects. He added that while Guterres doesn’t miss attending summits and conferences, he misses being in the field, “seeing what the UN is able to deliver in the field, in development, in humanitarian and the work that we do.” As for Dujarric himself, his biggest challenge is accessing the informal information that comes from physically working with people, he said.

PassBlue pointed out in the live briefing there are few official readouts of Guterres’s calls to leaders, leaving the public in the dark. Dujarric replied: “There are some calls which are important and part of also of public diplomacy and ensuring that there is a public message as well as a private message. He is also engaging in more discreet diplomacy and speaking to other leaders, speaking quite a bit to Permanent Representatives here. He has meetings with them. He meets, he is meeting with the Security Council President for the next month, I think either today or tomorrow. He has been actually, extremely busy, and as always some of it is public diplomacy and some of it is discreet diplomacy.”

• In a personal essay with a political twist, PassBlue’s Facebook specialist, Laura Kirkpatrick, pines for the pre-pandemic days of free movement between Buffalo, N.Y., her hometown, and Ontario, Canada, just on the other side of a bridge. She also tried to figure out why a UN flag flew on the bridge and others on border crossings. No one seems to know, but maybe an expert will come out of the woodwork.

• The spokesperson’s briefing gave an update on Covid-19 in Jordan, which has 1,200 cases. The UN condemned the murder of five civilians, including three aid workers, on July 22 by militias in Borno State, Nigeria.

• Geir Pederson, UN special envoy for Syria, announced to the Security Council that the third session of the Syrian-led Constitutional Committee is scheduled for Aug. 24. Pedersen said that progress on issues such as detainees, abductees and missing people has been insufficient.

• A new UN policy brief on Covid-19 and the Arab region says its economy will shrink 5.7 percent, with some areas contracting as much as 13 percent. These changes will particularly affect the poor.

• The UN spokesperson’s briefing touched on Ukraine, where renewed commitments have been made for a cease-fire in the restive region in the east; and on South Sudan, Burkina Faso, Djibouti, Libya and Siberia, refugee treatment and other matters. Also:

• Pamela Coke-Hamilton of Jamaica has been named the executive director of the International Trade Center, the joint agency of the UN Conference on Trade and Development and the World Trade Organization.

• The UN spokesperson was asked Guterres’s view on reports that US Secretary of State Pompeo said that the head of the WHO, Tedros Adhanom Ghebreyesus, has been “bought by China.” The response: “I’m not going to comment on his, on his speech. I think the Secretary-General’s position supporting WHO, supporting Dr. Tedros, is well known, has been expressed before and will continue to be expressed.”

• A reporter asked whether any special envoys, who are international public servants, would hold news conferences, as few have done so during Covid-19, even remotely. Dujarric, the UN spokesperson, replied: “Understood. Thank you, we will pass that along.”

• The Security Council debate on the implications of climate change on global security generated wide support from Council members, many of whom called for mainstreaming assessments of climate security risks, including those based on data, in Council decision-making. Many countries also endorsed Germany’s call for an envoy on the topic. But the US, China and Russia — permanent members of which one is Communist country and another formerly Communist — did not embrace the German-led draft resolution, so it was not put to a vote. Instead, it remains viable for future Council members to pick up in 2021, when new countries join the Council (Germany’s term ends Dec. 31.), and “the time is ripe,” said a diplomat.

The joint statement from the 10 Council members supporting the German-led debate said, partly: “Today’s debate sends a clear message that the vast majority of states speaking in the Council today, including some of those most affected by climate change, expect the Council to address these challenges.” Besides China, Russia and the US, Indonesia and South Africa did not join the statement.

The US ambassador to the UN, Kelly Craft, did not participate in the debate, but an acting-deputy read a speech. Craft may have recused herself from the meeting, as her husband, Joseph Craft, is a coal magnate, representing a potential conflict of interest. In a scoop in May, Irwin Arieff of PassBlue reported on Craft’s efforts to secure government help to sustain his energy companies in the pandemic. 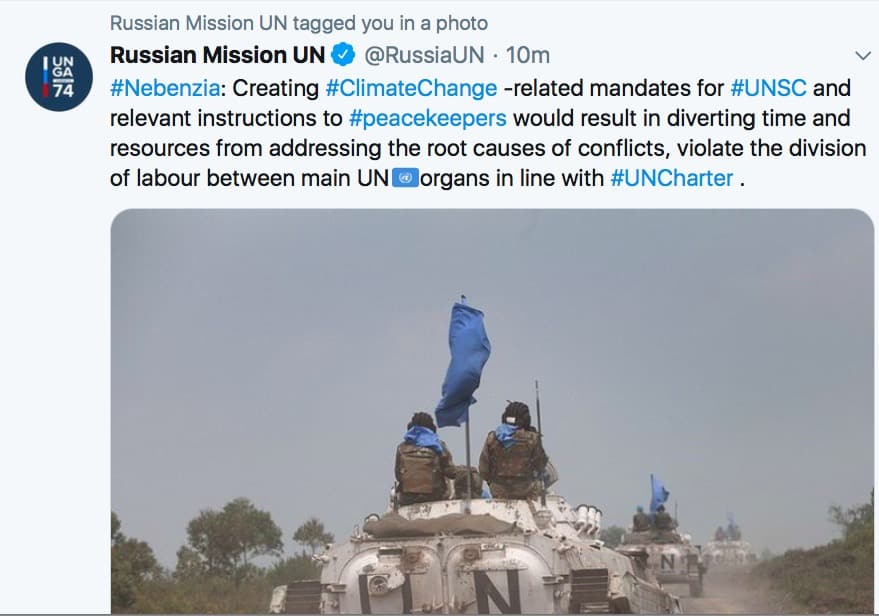 Allison Lecce is from Chappaqua, N.Y., and a student at Fordham University majoring in international studies with a minor in journalism. She received this year's Fordham College Alumni Association Journalism Scholars Award.