A military coup in Mali; massive protests in Belarus over the re-election of President Alexander Lukashenko; more than a million people displaced in Burkina Faso; and the United States takes its next step to extend the Iran arms embargo through the United Nations Security Council, as most of its members still push back.

It takes just two clicks to hear our new podcast episode, “In Lebanon, a Crisis on Top of a Crisis,” featuring Lebanon’s ambassador to the UN and an academic who explain the complicated politics in their country, a vulnerable spot in the Mideast, as it copes with the deadly Aug. 4 blast.

• In our mid-August podcast episode, produced by Stéphanie Fillion and Kacie Candela, the Lebanese envoy to the UN, Amal Mudallali, describes how the recent blast could lead to vast improvements for her country but also poses serious risks; and Karim Makdisi, a professor at the American University of Beirut, clarifies the US-French fight over the direction of the UN mission in Lebanon, Unifil, to be decided on Aug. 28.

• UN spokesperson’s briefing: Secretary-General António Guterres was following the protests in Belarus that began on Aug. 9 against the re-election of President Lukashenko and that were met with violence by authorities. Guterres stressed the importance of allowing citizens to exercise their rights and called for an investigation into allegations of torture of people under detention. The situation simmers as a US diplomat is reportedly traveling to Russia and Lithuania to discuss Belarus.

• Irwin Arieff cuts through the spin on the Trump administration’s announcement of an agreement that could change the Mideast by “building a diplomatic bridge between Israel and the United Arab Emirates,” Arieff writes. He ends his analysis this way: The pact “does nothing to settle the central conflict long plaguing the region: the enduring battle between Israel and the Palestinians. Instead it allows Trump, Netanyahu and Prince bin Zayed to put that conflict aside and focus on more meddling in Iran. How will that work out for the region — war or peace? We may know by October.”

• Spokesperson’s briefing: Intensifying problems in the neighboring countries of Mali and Burkina Faso in West Africa continue as Mali’s President Ibrahim Boubacar Keita was forced to resign after he and some members of his government were arrested in a military coup on Aug. 18. Secretary-General Guterres called on Malians to “preserve the integrity of the country’s democratic institutions” and the UN affirmed that with Economic Community of West African States (ECOWAS), the African Union, the European Union and other partners, it “will continue to accompany Malians in their efforts to consolidate peace and democracy.” Yet the regional and international response condemned the coup. In Burkina Faso, another landlocked country in the Sahel region, more than one million people are displaced because of violence by armed groups.

• Barbara Crossette reports on the controversial appointment of Tlaleng Mofokeng as the special rapporteur for physical and mental health for the UN Human Rights Council. A physician and recognized specialist on reproductive health, she is planning to take the cause of decriminalizing prostitution global, leaving nongovernmental organizations that work on ending human trafficking — including prostitution — shocked. (Mofokeng did not respond to repeated requests for a comment on the opposition to her appointment.)

• Spokesperson’s briefing: Three experts, Mohamed Auajjar of Morocco, Tracy Robinson of Jamaica and Chaloka Beyani of Zambia, have been appointed to the Independent Fact-Finding Mission on Libya, which was established in June by the UN to record and investigate international humanitarian law violations committed in Libya. Elsewhere in Africa, Guterres called for “an immediate restoration of constitutional order and rule of law” in Mali and the immediate release of President Keita and his cabinet members.

• Spokesperson’s briefing: Four UN peacekeepers in Mali were injured after an improvised explosive device, or IED, was detonated by an unidentified group against a Minusma logistics convoy near Gao. The attack comes one day after the UN spokesperson reported that the security situation in Bamako, the capital of Mali, was “relatively calm” after the Aug. 18 coup. Despite increasing condemnation of the coup by the international community, thousands of civilians met in Bamako yesterday to celebrate. The military government said it would implement a transitional president until elections could be held, and a spokesperson said: “We have come here to thank you, to thank the Malian public for its support. We merely completed the work that you began and recognize ourselves in your fight.”

Spokesperson’s briefing: Numerous reporters asked how Guterres was responding to the letter that US Secretary of State Pompeo hand-delivered on Aug. 20 to Guterres and the Security Council president at UN headquarters in New York City. The letter, signed by Kelly Craft, US ambassador to the UN, notified Guterres and the Council president that the US was initiating the process to restore “virtually all sanctions on Iran lifted under UN Security Council Resolution 2231,” as Pompeo tweeted, by triggering the snapback provision in the 2015 Iran arms deal. (Pompeo also met with the UN envoys from Niger and the Dominican Republic — elected Council members — during his New York City trip. Niger holds the Council presidency in September and the Dominican Republic is the only Council member that voted yes with the US on its recent failed resolution to extend the Iran arms embargo.)

The 30-day process triggered by the US letter could have been timed to coincide with President Trump’s possible plan to speak physically on Sept. 21 at the annual UN General Assembly opening session, despite that it is supposed to be held virtually.

#Pompeo needed an entourage to deliver a letter at UN invoking #snapback on #IranDeal pic.twitter.com/2z4qq6yTmH

Stéphane Dujarric, the spokesperson for Guterres (who is still in quarantine after a vacation in Portugal, his home country), told reporters that the UN Secretariat’s role is to receive and circulate documents, not to comment on them. When pressed again about actions the US may be expecting from Guterres related to the letter, Dujarric said, “I think you will have to ask them what they expect but . . . the Security Council needs to interpret its own resolutions.”

Soon after the letter was received by the Council, 13 of the 15 members sent their own letters to the Council president, Ambassador Dian Djani of Indonesia, rejecting the US action on legal grounds. (The US legal brief defending its right to invoke the snapback provision is here.)

The letter from Belgium, an elected member of the Council, for example, lays out the country’s position, shared by other Europeans in the Council: 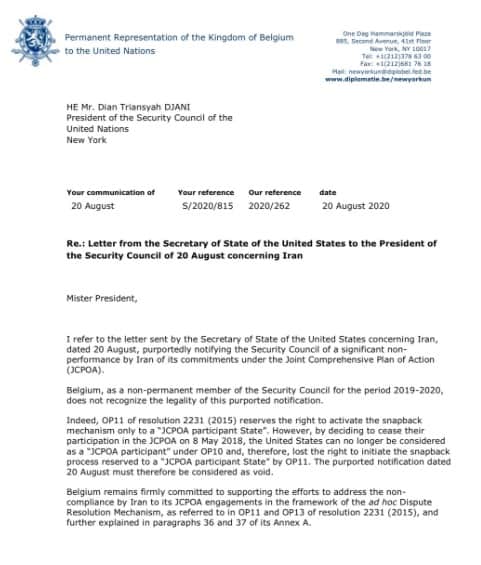 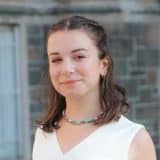 I just want to inform the human race: YOU are a dismal FAILURE. The hatred flowing into conflict and armed hostilities simply verifies that the deadliest animal in the Universe is homo sapiens.