It has been a banner year for the long-overdue push to appoint women to the notoriously male-dominated leadership ranks of United Nations peacekeeping and political missions. Five out of six mission-leadership jobs in the first half of 2020 went to women. That includes all-female leadership teams not only in Cyprus but also in Iraq, defying assumptions that women are unfit for — or unwilling to assume — service in the toughest countries.

Credit goes to the UN’s 2017 Systemwide Strategy on Gender Parity and to Secretary-General António Guterres, who is working to correct a stubborn gender imbalance at political and peacekeeping missions, aggravated by institutional barriers, biases and increasing politicization of appointments.

A joint initiative, led by Paige Arthur of the New York University Center on International Cooperation and Anne Marie Goetz of the NYU Center for Global Affairs, has been independently tracking these changes and is about to launch a UN Senior Appointments Dashboard. It will enable easy navigation and data retrieval for, say, a quick look at how many women from a country or region have been appointed in a given year or over the past quarter century.

As researchers for the initiative, we have been collecting data from UN press releases on the appointments of special representatives of the secretary-general (called SRSGs) and deputy special representatives (DSRSGs), from 1996 to the present. The goal is to identify trends and demographic patterns in the UN’s senior appointments, with a focus on the UN’s peace and security institutions.

Our data show that since 1996, 78 percent of all special and deputy representative appointments have gone to men. Women have held a similarly low number of the top- and middle-management positions that act as a vital pipeline to mission leadership. As the gender parity strategy soberly observed in 2017, at the slowly changing rate it would take 703 years to reach parity at the director level of UN mission leadership, and without pre-emptive measures, the gender gap in civilian peace operations would get even worse.

Findings like these have triggered fast-track recruitment efforts. In 2017 a global call for SRSGs/DSRSGs led to about 700 nominations from 126 nationalities, with 41 percent going to women. But only four of the nominations resulted in actual appointments — and frustratingly, the UN does not indicate how many were women.

The picture improved in 2018, when the number of female SRSG/DSRSG appointments outnumbered those of men for the first time. The chart below, tracking appointments by the respective terms of recent secretaries-general, shows the impact of the Guterres strategy. 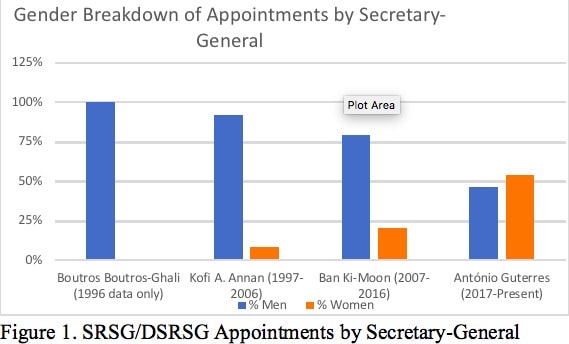 Concrete action may have helped enlarge a pool of female candidates that had been constrained by institutional barriers, such as the implicit expectation that midlevel professionals in the UN’s political and peacekeeping departments complete at least two tours of duty in nonfamily stations in order to be considered for a promotion (let alone a mission leadership appointment). Although men and women alike work away from their families to progress in their careers, this may be less viable for women at certain stages of their lives.

UN professionals who are women and older than 40 have fewer children and higher rates of divorce, and are more likely to be unmarried. In our dataset, only one-quarter of women special representatives report their marital status in the press releases announcing their appointments, compared with two-thirds of men. At the time of their appointment, men on average are slightly older than women (59 vs. 56 years). Men also tend to have slightly larger families (2.8 children vs. 2.2 children).

As Karin Landgren, a former UN special representative to Liberia, points out, UN press releases on their own can be an unsatisfactory, archaic source of information.

“Only married appointees have their status spelled out in a UN press release,” she said. “We never read that an appointee is single, divorced, widowed or in a civil partnership. There is an implicit value judgment here — which also illustrates how ludicrously outmoded this practice is.”

Biased assumptions about women’s leadership abilities are shared by UN member states and may be contributing to and worsened by the politicization of senior appointments. Although ostensibly supportive of the gender parity strategy (the UN’s Group of Friends of Gender Parity is the largest of such groups), some member states have been known to interfere with these high-level appointments, sometimes pressuring the secretary-general to bypass diversity initiatives and instead install people who are considered palatable to the receiving government.

Beyond the problem of political interference, UN missions’ downsizing, a higher mandated retirement age and budget cuts have intensified competition for the crucial middle-management pipeline positions, and male-dominated staff unions have resisted affirmative action reforms. So administrative steps alone are not enough.

The rise of women who lead political and peacekeeping missions has been anything but even. The momentum of 2018 — when female appointments to SRSG and DSRSG surged 30 points, to 77 percent — stalled in 2019, with women representing only 29 percent of appointees, before jumping to 83 percent so far this year.

Our data also provide a more nuanced picture of how well the UN is addressing the complementary priority of regional diversity. Although over the past three years, appointments of men have been slightly more skewed toward the Western Europe and Others Group region (known as Weog), countries outside it nevertheless represent 57 percent in male appointees. These numbers are down slightly from 60 percent from 1996 to 2016, owing largely to appointments from African countries.

The geographic distribution of women appointees, on the other hand, may have improved by 4 percent since 2017 (with non-Weog appointments increasing from 37 to 41 percent), but the share of women appointees from countries outside the Western Europe grouping is still below half, indicating that the UN has more work to do to diversify female mission leadership. (In the chart below, Grulac refers to the Group of Latin America and Caribbean Countries.)

By consistently making gender equality a priority, Guterres can claim some success for carrying out measures toward parity within the UN. It remains to be seen whether these reforms — which include affirmative action elements and special training for women leaders — will become an established component of planning and recruiting for UN missions.

The new UN Senior Appointments Dashboard is scheduled for release during the annual women, peace and security debate in the Security Council, in late October. Our hope is that this interactive tool will enable real-time monitoring of the commitment to the gender parity strategy at the most senior levels of the UN, while also providing much-needed fuel for discussions about the UN leadership’s diversity.

YOU CAN MAKE A DIFFERENCE IN ENSURING DEMOCRACY: PLEASE DONATE TO PASSBLUE, A NONPROFIT MEDIA SITE BASED IN NEW YORK CITY

Congratulations! Thank you for publishing these findings. I spent 16 years in the UN system, and it is certainly a male-dominated organization. From my UN experience, female staff members, at all levels proved to be highly qualified, disciplined, and motivated.

My career started in Security and moved to Supply Chain. Not a lot of women in either of these professions. I would like to know what the UNSG has planned to recruit more women in the security and supply chain at the international field service and professional level positions? There are a good number of women on UN rosters at FS and P1-P4 levels trying to obtain another UN opportunity after being downsized. Do not forget about us.