Since its founding 75 years ago, the United Nations has proven, with the support of its member countries and other partners, its worth in complex problem-solving. That includes preventing great-power wars, remedying humanitarian emergencies, safeguarding human rights and reducing extreme poverty. But as we commemorate UN Day, with world leaders having marked the world body’s first 75 years in September by adopting an action-oriented UN75 Declaration, the UN must still evolve.

That work begins with focusing on the coronavirus recovery, inequalities, the climate crisis and, perhaps most alarming, the rise of extreme nationalism.

When we served our one-year terms as president of the General Assembly — back-to-back from September 2018 until September 2020 — the headlines and trend-lines foreshadowed the return of a virulent form of nationalism fueled by surging migration, perceived and real economic inequality and the emergence of leaders who dehumanize others and divide rather than unite. At the 2019 UN Climate Action Summit, the world rallied around a defining issue of our time — the climate emergency — by reaffirming commitments and pledges made in the 2015 Paris Agreement.

Regrettably, violent conflicts and environmental crises have grown more acute. With the onset of the Covid-19 pandemic earlier this year, the World Bank estimates there will be a 5.2 percent contraction in 2020 in global GDP, ushering in a financial and economic crisis far greater than the one in 2008 to 2009. The international institutions built since the UN’s founding in 1945 to help nations manage and resolve their problems peacefully — and together — are being weakened to a degree not seen since they began functioning.

Yet dealing with global issues calls for policies and actions beyond the writ or abilities of any one country. Concerted action, coordination and cooperation are imperative to addressing today’s global challenges.

To galvanize action toward improving multilateral responses to the most pressing  crises, we welcome the far-reaching and creative “Roadmap for the Future We Want & UN We Need,” a proposal presented last month to world leaders who attended the UN-75 virtual gathering of the General Assembly and showcased at the preceding UN75 Global Governance Forum. Having defended our nations’ foreign policies, we know firsthand the need for bold, original ideas to move complex multilateral negotiations toward results that strike a balance among local, national and global interests.

Covid-19 and its devastating social and economic consequences may be the greatest calamity to face the UN since its founding. However, the international community continues to also confront runaway climate change, growing mass violence in fragile states, weapons proliferation, cyberattacks, setbacks in women’s rights and empowerment and the serious possibility that the Sustainable Development Goals will be unattainable for many countries.

By promoting a UN that better harnesses the ideas, networks and abilities of diverse governments, businesses and civil society groups, the Roadmap recommends new tools, platforms and approaches to global governance for addressing 21st-century threats, challenges and opportunities. It raises ambitions to carry out the UN75 Declaration in two notable ways:

These ideas include upgrading and focusing the UN Peacebuilding Commission on prevention, strengthening the international rule of law and enhancing G20-UN relations to accelerate recovery from the pandemic.

Similar to the Roadmap, we place human rights, human solidarity and the need for a strong global civic ethic at the heart of an inclusive conception of governance across borders. We take an unapologetic stand against the rise of extreme nationalism, which corrodes efforts to upgrade essential structures of the international order, to abide by international law and to better manage global challenges.

The Roadmap leverages this year’s milestone to revisit, reaffirm and strengthen the UN’s role. Its recommendations and spirit also re-emphasize key ideas and sentiments voiced by citizens worldwide who participated in the UN secretary-general’s Global Conversation and Survey. By championing the UN75 Political Declaration and partnering with diverse civil society organizations to realize the UN’s potential, we will continue to take essential steps to ensure that the future we want, for this and future generations, becomes the future we get. 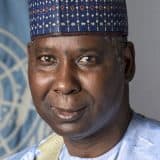 Tijjani Muhammad-Bande, from Nigeria, was president of the 74th session of the UN General Assembly.

2 thoughts on “UN-75: The Moment to Build a More Inclusive World Order Is Here”