The UN Pension Fund’s Latest Flareups and Hazards to Whistleblowers

At the $79.4 billion United Nations pension fund, continuing tensions came to a head this month when the UN participant representatives to the pension board — elected representatives of 85,000 active UN staff members — wrote on Dec. 2 to the General Assembly body that oversees the fund about their concerns on a range of issues regarding the fund’s administration and governance.

The fund has a long history of whistleblowers calling attention to dubious actions and malfeasance by the fund’s leadership that have been later substantiated by internal audits. In this latest flareup, tensions are bound to intensify unless Secretary-General António Guterres steps in to end a pattern of unsavory actions by the board against the UN participant representatives.

The saga this month has entailed one heated letter after another. In response to the representatives’ Dec. 2 letter, the board chair, Martha Helena Lopez, one of Guterres’s four UN executive heads representing him on the board and the UN’s assistant secretary-general for human resources management, wrote on Dec. 8 to the chair of the Fifth Committee, charging the representatives with unethical conduct, breach of board confidentiality, code of conduct and procedure and violation of board governance.

Lopez’s letter also accused the representatives of violating staff rule 1.2(j), which requires that staff members “shall not seek to influence Member States, principal or subsidiary organs of the United Nations or expert groups in order to obtain a change from a position or decision taken by the Secretary-General.”

Lopez was referring specifically to the UN representatives’ appeal to the Fifth Committee that it deny a request by Guterres, as the fund’s fiduciary for investments, the authority to borrow money for the fund to invest in derivatives. They stated that this was an earlier plan from Guterres’s former representative for investments, Sudhir Rajkumar, proposed against the advice of the fund’s senior investment officers.

The representatives cited a lack of research on how the borrowing would be carried out and related risks, recalling the detrimental role of derivative trading in the 2008 financial crisis. Their concerns come amid serious deficiencies revealed by a recent investment governance audit (A/75/215) substantiating their allegations of conflicts of interest and lack of safeguards in decision-making, among other matters, in the investment office under Rajkumar’s leadership. He resigned in March 2020.

In response to Lopez’s letter to the Fifth Committee, the UN representatives wrote to Guterres on Dec. 12, referring to her accusations, noting that staff rule 8.1 (e) strictly prohibits retaliation against a staff representative in exercising his or her functions; and that paragraph 32 of the Standards of Conduct of the International Civil Service prohibits their discriminatory or prejudicial treatment. These principles, they added, have also applied to elected representatives of the UN staff pension committee and the board from the fund’s inception in 1949.

They’re not a “small sub-group” of participant representatives, as Lopez claimed, but elected representatives of two-thirds of UN common system staff. Moreover, their letter to the Fifth Committee chair was about issues in the board’s annual report (A/75/9) as well as Guterres’s report on investments (A/C.5/75/2), which are both public documents.

In addition, they said, “General Assembly members have welcomed [their] views, as they have sought the views of other Board members and observers, on areas of concern.”

On Dec. 15, the UN chef de cabinet, Maria Luiza Ribeiro Viotti, responded for Guterres to the UN representatives that Lopez’s accusations regarding breach of board governance are up to the board to resolve; that Guterres takes his responsibility as fiduciary seriously; that the UN representatives had urged the Fifth Committee to reject certain positions and recommendations in Guterres’s report to that body; and that he wished to remind them of their obligations under staff rule 1.2(j).

Where does Guterres’s response leave the UN representatives? It could expose them to more retaliation from the board leadership for their truth-telling amid an environment of weak UN whistleblower protection and it risks disenfranchising their 85,000 constituents.

For some of the four UN participant representatives (and two alternates), their efforts in truth-telling have already exacted a high personal and professional cost. One representative, a pension fund staffer, has been marginalized in her career. She and another representative — both fund staff members — have been the targets of failed legal challenges by the board to try to prevent them from taking their seats on the body. Another representative was unlawfully suspended from the board last year.

In attempts to silence them, the board has instituted onerous and selectively enforced confidentiality requirements. It has also attempted to change the fund’s rules and regulations to prevent fund staff members from being elected to membership on the board. A governance audit (A/73/341) described these moves as working against good governance, accountability, transparency and fairness.

There’s no indication that Lopez has mitigated any of these retaliatory and discriminatory behaviors toward the UN representatives, either in her capacity as one of Guterres’s own representatives on the board, as board chair or as head of UN human resources. She has held that post since August 2017.

In addition, it should be noted that although the UN ethics office substantiated, and the UN administration accepted, that Sergio Arvizù, the former chief executive of the UN pension fund, had retaliated against three of its staff members, Lopez took no action on this finding.

One of the most disturbing findings in a recent independent governance study, done by Mosaic Governance Advisers (annexed to the board’s annual report, A/75/9), was that among board members, there was “confusion about the roles and mandates of the board” and a lack of clarity about the legal and organizational status of the fund and the board’s fiduciary responsibilities.

In his response to the UN representatives’ letter, Guterres appears to be looking the other way in a clear test of the UN’s reputedly weak whistleblower protection system, where continuing tensions among the fund’s fiduciaries risks deflecting attention from their responsibility to protect the life savings of the fund’s participants and beneficiaries.

Effective oversight of the fund must start with Guterres’s executives on the board collaborating more fruitfully with the UN representatives to ensure the best interests of the representatives’ 85,000 constituents and all UN staff members and beneficiaries dependent on the fund’s performance.

Guterres himself must also act to ensure that Lopez and the other executive board members move to resolve differences and competition among the board’s constituent groups for the benefit of all stakeholders as well as the reputation of the UN.

OUR DEEP THANKS TO EVERYONE WHO HAS DONATED TO OUR MATCHING FUND-RAISING CAMPAIGN! WE ARE VERY CLOSE TO OUR GOAL, SO PLEASE HELP US GET TO THE FINISH LINE BY GIVING BY DEC. 31. 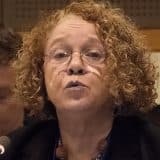 Loraine Rickard-Martin is a co-founder and chief executive of Compliance and Capacity Skills International, a consulting partnership specializing in international sanctions. She is a former senior political affairs officer in the Security Council Affairs Division of the UN Department of Political Affairs. She was also secretary of the UN Secretary-General’s high-level panel on threats, challenges and change in 2003-2004; a lecturer on UN sanctions at Columbia University’s School of International and Public Affairs; and a member of the UN Board of Inquiry into the death of two members of the UN Group of Experts in the Democratic Republic of the Congo. She is a co-author of “The Evolution of UN Sanctions: From a Tool of Warfare to a Tool of Peace, Security and Human Rights” (Springer, 2017).