COPENHAGEN — In her book, “The Second Sex,” Simone de Beauvoir argued that one is not born but rather becomes a woman. De Beauvoir emphasized that destiny is not a cosmic force but a human choice, a result of circumstances and culture. It follows that circumstances and social determinants dictate a woman’s role in politics rather than her biology, psychology or even her intellect.

It is this same logic that explains the limited presence of Syrian women politicians in the United Nations-led political process, based on Security Council Resolution 2254. The resolution, adopted in December 2015, created an exclusionary culture not only against most Syrian people but also particularly for women, despite the repeated narrative of Staffan de Mistura, the UN special envoy at the time, on the importance of women’s roles in the political and peace-building process for Syria.

Because the resolution considers “engagement in violence” a precondition for participation in the Syrian political process, only the regime and the opposition have been given a platform in the negotiations. Syrian women’s efforts in peace-building have been ignored, and the UN-supported initiative Syrian Women’s Initiative for Peace and Democracy (Swipd), launched in 2014, has been completely neglected in the resolution.

The design of the political process in Syria designates men as the Syrians, hence, women are relegated to the “other” — as de Beauvoir described women’s role in society — and consequently denied full-fledged partnership in the political process. Specifically, Resolution 2254 has halfheartedly encouraged women’s participation without establishing any quota for their presence in the delegations and the political process. Syrian women have been kept to an advisory role as members of the Women’s Advisory Board; as a result, their political leadership has not been visible to the Syrian public.

Having been a member of the board, I resigned in 2018 after experiencing the rigid glass ceiling that prevented board members from real engagement in the politics of their country.

Five years after its adoption, the Security Council resolution has not made any progress toward political compromise. This failure was announced by Geir Pedersen, the current UN special envoy for Syria, in his last briefing to the Security Council, in February. Pederson called for immediate international diplomacy to bridge the gap between the two key players in Syria, the United States and Russia. This diplomatic effort must consider dramatic changes in Syria’s political reality and shifts in the power dynamic for both the Syrian regime and the opposition. Strategies for including women and different sectors of Syrian society must be addressed.

The most pressing priority is to save Syria from the fallout of inhumane conditions for its citizens currently living in the country and in refugee camps. This urgent intervention must be part of international efforts that are fighting terrorism. The continuing deterioration of Syrian living conditions will only feed the chaos and violence in the country, strengthen terrorist groups and threaten regional security.

The complete eradication of terrorism must address its culturally driven motivations through the modernization of the country and the assurance of sustainable human development. Syria must evolve into a modern, secular state, where its people can benefit from democracy, good governance and human rights.

The joint work of Washington and Moscow should focus on assisting Syrians in creating an environment conducive to democracy and secularism. Any future political process in Syria needs to encourage political freedom and facilitate the emergence of democratic political parties.

On International Women’s Day, it is imperative to emphasize that women’s political participation is both a means and an end in establishing a democratic Syria. The political leadership of Syrian women must be required and supported through quantitative and qualitative measures in any future UN resolutions on Syria.

The fall of Syria into chaos and terrorism is not destiny; it is a matter of choice by those who have influence over Syria. Yet after the complete failure of Resolution 2254, Syria now needs a new approach to address the deeply rooted causes of the war and to help the Syrians to prevent more political turmoil.

The Biden administration can play an integral and constructive role in Syria’s destiny by calling for immediate negotiations with Russia, reviving a political path toward achieving a full democratic transition and establishing a stable state in which Syrian women lead.

Let’s make this potential into a reality.

BY DONATING TO PASSBLUE, YOU CAN MAKE A DIFFERENCE IN THE WORLD 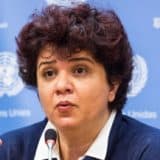 Mouna Ghanem is a democratic activist who has written about the Syrian civil war and peace process for such media as The Guardian and The Independent. She previously served on the Women’s Advisory Board to the UN. A medical doctor, with a master’s degree obtained from Johns Hopkins School of Public Health before the civil war, she worked for international agencies that included UNFPA and Unifem (the precursor to UN Women)