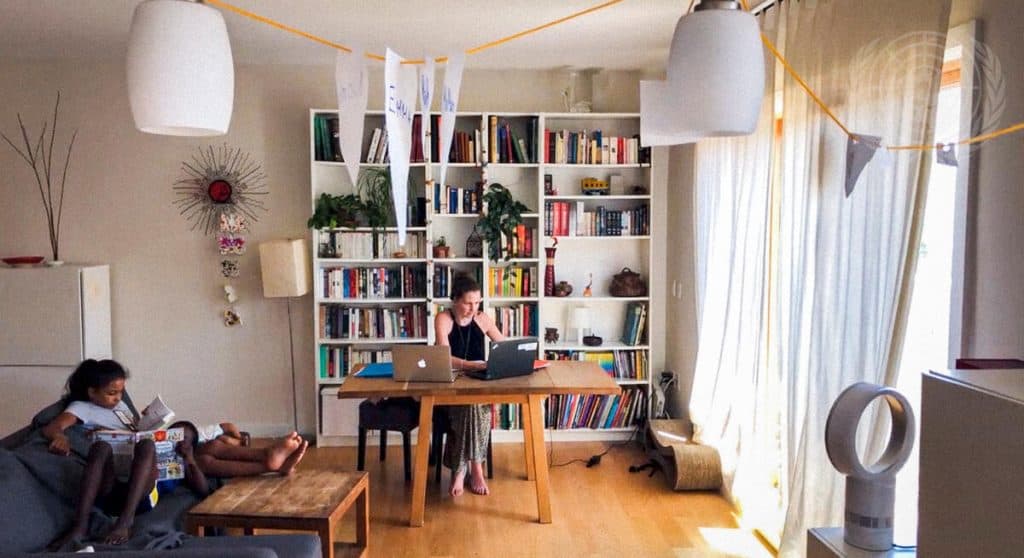 Veronique Vandegans, the United Nations chief of the French Interpretation Section, working at home in Brooklyn, N.Y., with company. The photo is part of a story for the UN Department of Global Communications on remote interpretation. MANUEL ELIAS/UN PHOTO

The United States ambassador goes honest on racism; an ex-Ecuadorean head of state aims to be the next leader of the United Nations; a major global rights group calls Israel’s actions “apartheid.”

Scoop: A source familiar with the discussions told PassBlue that Staffan de Mistura, an Italian-Swede who was the UN envoy for Syria from 2014 to 2019, among other posts, is being considered for the UN’s Western Sahara personal envoy job, filling a position that has been vacant for two years, after a German, Horst Kohler, left in frustration and no UN-proposed candidates suited the relevant parties. The part-time job entails seeking a “negotiated settlement under UN auspices” to the long-brewing tensions in Western Sahara between the Frente Polisario, which represents the Sahrawi people’s independence movement, and Morocco. Since 1991, the UN has kept a peace operation in the region, called Minurso, to monitor the cease-fire and instill a stabilizing presence. But the situation is becoming more volatile, UN experts told the Security Council in a closed meeting last week. In December 2020, President Trump tweeted that the US recognized Morocco’s sovereignty over Western Sahara in exchange for the country normalizing relations with Israel. But the Biden administration appears to be taking a different tack, pushing Secretary-General António Guterres to name an envoy, which suggests that the US sovereignty policy is not a given. (Update: Axios reported that Secretary of State Antony Blinken told Moroccan Foreign Minister Nasser Bourita in a phone call on May 1 that the Biden administration won’t reverse President Trump’s recognition of Morocco’s sovereignty over Western Sahara, at least for now. That could mean the UN envoy choice is nothing more than symbolic to appease the Frente Polisario that the US is doing something about the problem.) — DULCIE LEIMBACH

Please remember to donate to PassBlue, an independent, nonprofit media site that provides original reporting, analysis and podcast episodes related to the UN.

• “For Myanmar, Why Not Send an Asean/UN Civilian Monitoring Mission?” The essay by Ian Martin and Charles Petrie, former UN mediators, proposes a “wildly unrealistic” idea: a UN/Asean civilian-protection presence be installed in Myanmar to create space for any future peaceful negotiations.

• “A Tale of Two US Ambassadors on Racism,” Irwin Arieff analyzes what Linda Thomas-Greenfield, the new US envoy to the UN, said about America’s imperfections in a speech on racism, having grown up in the segregated South. But a previous US envoy, Nikki Haley, took umbrage at such a public admittance, contending it was a “win” for human-rights abusing nations across the world.

• Spokesperson’s briefing: The UN noted its “support” of the five points of consensus that emerged from the April 24 Asean (Association of Southeast Asian Nations) meeting in Jakarta on Myanmar. The UN envoy, Christine Schraner-Burgener, held meetings on the sidelines with Myanmar’s commander-in-chief, Min Aung Hlaing, and others. The five points include calling for an immediate cessation of violence. The envoy spoke to the Security Council in a private meeting on April 30; the main takeaway, said one source, was Council members pushing for Asean to appoint an envoy as soon as possible to visit Myanmar.

A reporter asked: “Did [Schraner-Burgener] make an appeal to visit Myanmar without preconditions? What was his response? And what else did they discuss?” Response: “I don’t think it would be particularly helpful to share the precise details of the meeting at this stage.”

• The UN Office for the Coordination of Humanitarian Affairs, or Ocha, reported that Somalia is at the frontline of climate change, with more than 80 percent of the country experiencing drought because of global warming, according to ReliefWeb.

• “A Now-Retired UN Force Commander From Norway Double-Billed for Expenses”: Dulcie Leimbach reports on the UN’s first woman military commander, Maj. Gen. Kristin Lund, who was originally based at its peace operations in Cyprus, being paid by both the UN and her government, Norway, for moving expenses related to her UN job.

• Spokesperson’s briefing: A reporter asked, “Human Rights Watch is accusing Israel of committing crimes of apartheid and persecution against Arabs in the occupied territories and Israel itself. Does the Secretary‑General have any comment?” Response: “It’s not for me to analyse or characterise the situation in any particular way.”

Another reporter noted that the report’s recommendations to the UN include establishing a commission of inquiry to investigate systematic discrimination and reparations in Israel and Palestine as well as a global envoy to apartheid. “So, what’s your comment on these specific recommendations?” Response: “That question is really one in terms of what the Member State bodies of the UN would want to do, and we’ll have to see how they themselves wish to follow up on this.”

• Spokesperson for the General Assembly president: A letter was sent by Volkan Bozkir to UN member states outlining the May 7 public “informal interactive dialogue” with Guterres, the incumbent and only official candidate for secretary-general so far.

In response to a related question, the spokesperson, Brenden Varma, said there were six “applicants” who had written to the GA president to submit their resumes. Varma added that it was up to the respective presidents of the General Assembly and Security Council to decide together whether the applicants’ names should be sent to the UN member states. The applicants are a mix of civil society advocates and UN staff and former personnel. (See PassBlue’s latest article on the topic.)

• Spokesperson’s briefing: In India, the UN’s resident coordinator, Renata Lok Dessallien, and her team are helping the authorities’ respond to the pandemic emergency by sending equipment and supplies, including to local governments. In addition, the WHO and Unicef are procuring equipment, such as oxygen concentrators, nasal devices and oxygen-generating plants, for India. The WHO is also helping to set up mobile hospital units.

• Guterres “strongly condemns” the murder of two Spanish journalists and an Irish citizen after an attack by unidentified gunmen on their convoy in eastern Burkina Faso.

• Alain Noudéhou of Benin is the new deputy special representative for the UN peace operations in Mali, or Minusma.

• “Rosalía Arteaga, a Short-Lived President of Ecuador, Wants to Run Against the UN’s Guterres,” by Stéphanie Fillion for PassBlue and Geneva Solutions. A former president and vice president of Ecuador who served these posts briefly in the 1990s announced she was planning to run for the UN secretary-general post for 2022-2026, the only head of state to challenge Guterres for now. Arteaga, however, does not have Ecuador’s endorsement, presenting a major hurdle to her candidacy.

• Spokesperson’s briefing: Britain intends to cut 85 percent of its funding to Unfpa, the UN Population Fund, this year. Its executive director, Dr. Natalia Kanem, said the cuts would be “devastating for women and girls and their families across the world.” UNA-UK’s statement on the cuts. (Update: April 30: Unicef said that Britain was cutting its core funding to the agency by approximately 60 percent.)

• Guterres is scheduled to travel to Moscow May 12-13 to discuss his candidacy for another term as secretary-general, the UN spokesperson confirmed. (See more below on the visit.)

• The Russian mission to the UN held its regular briefing for reporters, the only permanent member of the Security Council (Britain, China, France and the US are the others) to hold such meetings publicly. Dmitry Polyanskiy, the deputy ambassador, spoke for an hour on topics that included “Russia-West relations,” allegations of Russian-sponsored militias in Chad as well as on Libya, Ukraine, Yemen, Myanmar, Afghanistan and Alexei Navalny.

As for Guterres’s visit to Moscow in mid-May, when he will meet with Foreign Minister Sergey Lavrov, he will discuss, among other things, his candidacy for another term as secretary-general. Polyanskiy said about Guterres’s visit:

“It’s not that we are now meeting him for the first time and are going to put questions like ‘what’s your name, date of birth, and so on.’ Of course not. But now he has experience of almost five years. He has a lot of things to process and a lot of things to share with us. And we need to understand what his conclusions for this first term were and what changes [if any] he intends to make during the second term, how he will interact with the different countries and initiatives.”

• Spokesperson’s briefing: It’s International Jazz Day, and Guterres’s statement about the 10th anniversary, reads, in part: “Its historic role in the struggle against racism and discrimination continues to unite cultures across the globe. Its rhythms and harmonies reflect the indomitable human spirit that can transcend the limits imposed by poverty and oppression.” (The spokesperson noted a 5 P.M. concert on jazzday.com featuring performances from cities around the world.) It is also Guterres’s 72nd birthday.

• Regarding the General Assembly annual pow wow in September, the spokesperson said: “We’re trying to see what we can do so that the leaders of countries all around the world can feel fairly represented. And so, that discussion is going on among the Member States, and we’re providing advice to them about the conditions here as needed, but we’ll have to see what the Member States themselves decide upon.”