Crucial aid into Syria continues; will a feminist head UN Women?; the good and bad of Security Council Arria meetings; Haiti on the edge.

We are closer to the finish line for our vital midyear fund-raiser, shooting for $5,000 by July 31, so please take just one minute to donate through our easy-to-use portal and make a huge difference for our team (see our photos)!

Try our news quiz this week, testing you on an array of facts about current events related to the UN, with a comedic twist. (What’s the French word for “mansplaining”?)

Scooplet: Two sources confirmed with PassBlue that Staffan de Mistura, who was proposed recently as the UN secretary-general’s personal envoy for Western Sahara was turned down by Morocco. The Western Sahara conflict with Morocco came up in a July 1, 2021 United States State Department media briefing, in which a reporter asked if the US has “no intention of reversing its recognition of Morocco’s sovereignty over Western Sahara”? (As recognized under the Trump administration.) The US spokesperson, Ned Price, responded: “It remains the administration position.” To another question, he added: “We strongly support UN efforts to appoint a personal envoy of the secretary-general for the Western Sahara and to do that as quickly as possible, and we’re prepared to continue to be actively engaged with all sides in support of that individual.”

• The German Envoy Did a ‘Good Job’ Shaking Up the UN Security Council: Helmut Volger, a Berlin commentator, writes that as Germany’s envoy to the UN, Christoph Heusgen, retires and returns to Berlin, his role representing his country in the Security Council in 2019-2020 “left no doubts that Germany would commit itself to strengthening the Council as a multilateral institution.”

• Does the UN Security Council Have an Arria-Formula Problem? The pandemic has brought enormous changes and challenges to the Security Council, Stéphanie Fillion reports. “One result has been the heightened politicization and proliferation of the Arria-formula meetings, or informal sessions, of the Council that can be initiated by any member.” These meetings, however, have only widened the split among the five big powers, some diplomats say.

Donate to PassBlue
Our coverage is free to read, but not free to create. Your support makes us strong.
Yes, I want to be part of it.
• Spokesperson’s briefing: Humanitarian aid delivery has improved in the conflict in Tigray, Ethiopia, but more is still needed. In Mekelle, 23 displacement sites did not have access to water because they lacked fuel to operate water pumps. Commercial flights have also stopped into the region.

• “As of today, UN Headquarters in New York has met the requirements to re-open fully for in-person business by the New York State authorities,” the spokesperson said. “Daily occupancy limits have now been lifted and all personnel who have been working remotely are expected to return to the workplace, regardless of their vaccination status.”

• “The United Nations called on Ethiopia, Sudan and Egypt . . . to recommit to talks on the operation of a giant hydropower dam, urging them to avoid any unilateral action, a day after Ethiopia began filling the dam’s reservoir. The U.N. Security Council will likely discuss the Grand Ethiopian Renaissance Dam (GERD) this week after Arab states requested the 15-member body address the issue,” US News reports.

• A UN Rights Expert Criticizes Recent US Laws Targeting Protesters: Adam DuBard writes that recent laws passed by some states in the US to restrict the right to protest have drawn the attention of Clément Voule, the UN expert on the rights to peaceful assembly and association, who criticized the new legislation. But will his criticism matter?

• Spokesperson’s briefing: Secretary-General António Guterres condemned the assassination of President Jovenel Moïse of Haiti. Guterres insisted that Haitians “preserve order and remain united.” (His statement.) A reporter asked, “What is the Special Representative of the Secretary-General [Helen La Lime, in Port-au-Prince] currently doing?” Response: “The SRSG is meeting with her senior staff. She is in constant contact with the acting Prime Minister of Haiti, Claude Joseph. In terms of staffing, we have about 1,200 staff in all in Haiti. A little less than 200 are international. They are all in the process of being accounted for.” [See PassBlue’s Aug. 8, 2020 article on the possibility of Haiti facing a “perfect storm” related to the Covid-19 pandemic. See also the July 7 media briefing, below, by La Lime, who said the UN recognized Claude Joseph as the acting prime minister.] Statement on Haiti by Ambassador Linda Thomas-Greenfield, US envoy to the UN.

• “A top UN expert has likened Belarus to ‘totalitarian states,’ warning that Minsk’s recent grounding of a passenger plane and subsequent arrest of an opposition journalist on board was part of an ongoing effort by officials to ‘purge’ the country of all dissent,” Aljazeera reports.

• Feminist Wanted: Seeking the Next Leader of UN Women: In an essay, Anne Marie Goetz and Joanne Sandler, global feminists who are deeply familiar with the UN specialized agency, write that although Guterres is seeking a new executive director for UN Women, it comes at a moment of peril for gender equality worldwide. So will he pick a feminist or bow to political pressure from certain member states to avoid a feminist appointee?

• Spokesperson’s briefing: A new report by the World Food Program and Unicef cited that at least 80,000 children under age five are at risk of severe malnutrition in the Central African Republic, a 29 percent increase compared with estimates for 2021. A reporter asked: “Regarding those 80,000 children . . . is it because WFP cannot deliver the food? Is it because they lack the money to deliver the food? Is it because of the security?” Response: “It’s a combination. Our humanitarian appeals, whether in Central Africa or in other places, are severely underfunded. As you know, the UN humanitarian system works on an as-needed basis. There’s an emergency. We do an appeal. We have a bit of reserve cash through the Central Emergency Response Fund, but that’s really just a very small, though very important, band-aid.”

• “A U.N. resolution proposed late Wednesday would allow the delivery of humanitarian aid to rebel-held northwest Syria through just one crossing point from Turkey for a year after objections to an initial Security Council draft that would have authorized sending aid through two border crossings,” Yahoo News reports. [Update: see July 9.]

• Spokesperson’s briefing: The much-awaited Security Council vote on extending the single cross-border aid mechanism into Syria resulted in the unanimous authorization of Resolution 2585, but it happened amid tremendous confusion on Friday morning, when the vote was scheduled at 10 A.M. in the chamber. Last-minute haggling continued into lunchtime in private Council meetings, mostly centered around Russia’s position, as journalists waited for news. (At one point, the Russian diplomats told a reporter “don’t worry.”)

Guterres said he “welcomes the Security Council’s decision to extend the UN cross-border mechanism in north-west Syria via the Bab al-Hawa border crossing,” which provides aid to 3.4 million people, including a million children. But ambiguity still pervaded the particulars of the Irish-Norwegian led resolution, including whether a six-month renewal of the mechanism, on Jan. 10, 2022, was automatic or not. See the tweets below by Charles Lister, a Syria expert, and Security Council Procedure, an independent specialist on the Council’s work. Russia’s statement and US’ statement.

Nevertheless, most Council members expressed relief with joy about the results — for now. Some even said it was the first time since 2016 that the Council was unified on Syria on the matter of humanitarian aid. 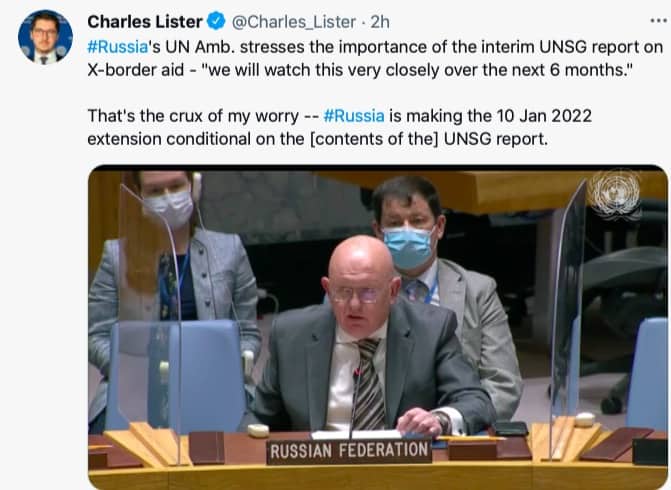 • A curious report from Fort Smith, Ark., said that the city was designated by a UN “ambassador of the arts” as an “artistic and culturally relevant city.” Turns out no such ambassador exists, the UN spokesperson told PassBlue.