Receding Ice in Iceland; UN Agencies’ Use of P.R. Firms; Lebanon on the Edge

We have reached two-thirds of the way to our important summer fund-raiser, shooting for $5,000 by July 31, so please take just one minute to make a US tax-deductible donation through our easy-to-use portal. We appreciate your contribution and thank you for being such a loyal supporter — new or longstanding.

• A Surprising Leg Up for Women in War-Torn South Sudan: On the Soccer Field: Ivana Ramirez reports that in a country wracked by extreme violence, including mass rapes, across its 10-year-history, a light shines on a new soccer league for women. Samantha Power, the head of the US Agency for International Development, or Usaid, tweeted the story. 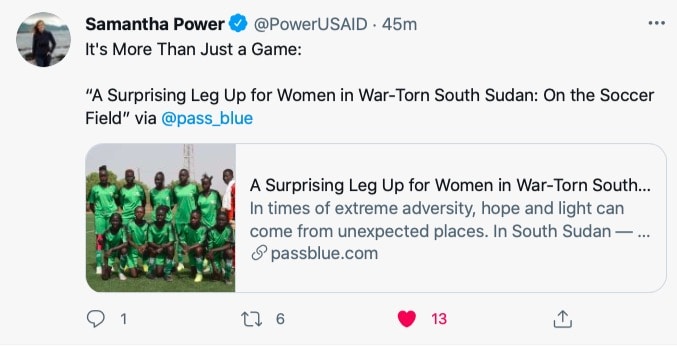 • Thinking Outside the Box: How UN Sanctions Can Be Used to Bring More Women Into Peace Talks: In an essay by Sophie Huvé and Rebecca Brubaker, from the United Nations University, they propose a novel use of sanctions to help draw more women into peace negotiations to end wars.

• Spokesperson’s briefing: Henrietta Fore, Unicef’s executive director, has resigned because of a “family health issue,” the UN said. UN Secretary-General António Guterres expressed his “sincere appreciation to Ms. Fore for her inspiring leadership of UNICEF and for her service to improve the lives of children all around the world.” He particularly noted Unicef’s “critical role in the global response to COVID-19 and in reimagining education.” Fore, an American, was appointed to the post on Jan. 1, 2018.

• The Public-Relations Industry Grabs a Foothold in the UN: Barbara Crossette reports that for the first time, UN agencies — such as UN Women and the UN Population Fund — are buying help for major events from public-relations experts just as transparency at the UN has hit an all-time low. Is hiring PR companies the beginning of a trend for the UN as it struggles to find money for humanitarian aid agencies?

• Spokesperson’s briefing: A reporter asked: “Protesters are in front of the United Nations, Cubans that are asking the United Nations to take action.  They are asking the Secretary-General to take a stand and to provide some guidance to be able to resolve the situation in the island. What’s the response from the Secretary-General to the protesters that are in front of the United Nations but, also, to the calls from the international community to do something in Cuba, especially after the reports and videos this morning of people being hurt in their homes, detentions and so forth?”

Response: . . . . “we continue to follow the situation there very closely, and we are concerned about the reports, as you say, of the death of a demonstrator. . . . our position has been very clear in that demonstrations should be conducted peacefully and that the right of freedom of expression and peaceful assembly should be respected. We want to make sure that people’s basic rights are respected and that really continues to be our position on that.” (The UN has a country team in Cuba that provides support to the various UN agencies, funds and programs and support for promoting the Sustainable Development Goals.)

• Spokesperson’s briefing: In South Sudan, the UN peacekeeping mission launched a new Peace Fellows program, whose purpose is to accelerate the implementation of the revitalized peace agreement. “The one-year initiative will bring together representatives from all 10 states and three administrative areas. They will focus on education. They will share information about the peace agreement, and they will also work to improve interactions between citizens and the Government,” the spokesperson said.

• Spokesperson’s briefing: The UN special coordinator for Lebanon, Joanna Wronecka, “expressed deep regret over the inability of Lebanon’s leaders to reach agreement on the formation of a new government that is urgently needed to address the country’s numerous challenges.” She noted that the government formation process has “suffered a reversal” and called for “swift measures to ensure the designation of a new Prime Minister, in line with constitutional requirements, and form a government able to undertake the necessary reforms to put Lebanon on the path to recovery ahead of free and fair elections in 2022.” There is still room for hope, she added, “but there is not time to lose.”

• A July 10 media call with Jeffrey Prescott, the deputy to US Ambassador Linda Thomas-Greenfield, followed up on the UN Security Council resolution approved on July 9, reauthorizing the single border crossing of aid from Turkey into Syria. Prescott reiterated details of the mechanism from the US perspective, saying, “The text of the resolution makes clear that the initial six-month authorization will extend for an additional six months once the UN Secretary-General issues his report. That means, importantly, there is no need for a vote in January, in the dead of winter, and that was a key diplomatic outcome that we were hoping to achieve and that we have achieved through this resolution.”

• The US State Department released its annual genocide and atrocities report.

• The State Department also announced it would extend a “formal, standing invitation to all UN experts who report and advise on thematic human rights issues” — that is, special rapporteurs. The first experts to be invited for an official visit are the rapporteur on contemporary forms of racism and the rapporteur on minority issues.