Joe Biden, speaking at the United Nations General Assembly on Sept. 21 for the first time as president of the United States, did not say again to the world that America was back. His message was that it never left and that his administration was looking to more productive engagement with nations in “this noble mission of this institution.”

Addressing the General Assembly with more than a hundred government leaders there in person — a contrast to last year’s virtual session — Biden spoke with more animation and energy than he often projects when talking to American audiences.

“We stand at an inflection point in history,” he said, describing this as a year “intermingled with great pain and extraordinary possibility. . . .”

“I’m here to day to share with you our United States’ intention to work with partners and allies to answer these questions,” he added. He mentioned the Covid pandemic, human rights and the need to “strengthen the core tenets of the international system.”

As if to emphasize the shared loss induced by the continuing pandemic, he said: “We’re mourning more than 4.5 million people — people of every nation from every background. Each death is an individual heartbreak. But our shared grief is a poignant reminder that our collective future will hinge on our ability to recognize our common humanity and to act together.”

Answering the pundits, journalists and politicians who have declared that US leadership is gone from the international scene, Biden drew on his administration’s early record. That includes returning to major UN entities that his predecessor abandoned: the World Health Organization, the Paris climate agreement and the Human Rights Council among them.

“The US remains committed to preventing Iran from gaining a nuclear weapon,” he said. “We are working with the P5+1” — Britain, China, France, Russia and the US plus Germany — “to engage Iran diplomatically and seek a return to the JCPOA. We’re prepared to return to full compliance if Iran does the same.” The JCPOA, or the Joint Comprehensive Plan of Action, is the formal name of the Iran nuclear deal.

Biden noted that the US has spent $15 billion on a global response to the pandemic and supplied 160 million doses of Covid vaccines globally, with 500 million more doses ordered for developing countries. He referred to the US pullout from Afghanistan as a positive marker that after 20 years, the US was no longer at war anywhere.

“Instead of continuing to fight the wars of the past,” he said, “we are fixing our eyes on devoting our resources to the challenges that hold the keys to our collective future.”

Biden came to the UN on the evening of Sept. 20 to meet with Secretary-General António Guterres and to speak on Sept. 21 at the General Assembly’s annual week of global leaders’ speeches, in which he focused on the pressing need to find cooperative solutions to universal problems. At home in Washington, however, his administration and the Democratic Party he leads have faced debilitating divisions and popular discontent over the handling of the Afghan pullout and a US drone strike in Kabul during the withdrawal, killing 10 innocent Afghans, seven of them children. The Biden administration has also been sharply criticized for its undiplomatic sidelining of France in creating a new alliance with Australia and Britain that involves producing nuclear-powered submarines, among other plans. France had earlier been chosen as the submarine supplier, albeit non-nuclear ones.

Appropriately for a UN speech, Biden mentioned “solving raging civil conflicts,” including in Ethiopia and Yemen, “where fighting between warring parties is driving famine, horrific violence, human rights violations against civilians, including the unconscionable use of rape as a weapon of war.”

Or as Guterres said in his UNGA speech: “The climate crisis is pummeling the planet.”

The president’s two main domestic reform proposals — which include improved social benefits for families and rebuilding crumbling public infrastructure like bridges and roads — are being stalled by opposition from Republicans and quarrels among Democrats.

For most of his UN speech, however, Biden avoided naming names, and did not mention China directly, as had been widely expected by previewers of the UN gathering. President Xi Jinping, who was not scheduled to speak at the General Assembly session but was dispatching his deputy prime minister to do so, was suddenly shoehorned into Sept. 21 to deliver remarks by pre-recorded video, with an image of the Great Wall in the background. (President Emmanuel Macron of France dropped his Sept. 21 speaking slot and instead, his foreign minister, Jean-Yves Le Drian, will speak at the session by pre-recorded video.)

Without naming names, Xi said in his speech, “China has never and will never invade or bully others, or seek hegemony.”

But Biden pointed to some spoilers, in his view.

He gave unambiguous support to the long-supported two-nation solution for Israel and a “viable, sovereign, and democratic Palestinian state.” Turning to the spread of authoritarian regimes, he said: “Authoritarians of the world may seek to proclaim the end of the age of democracy, but they’re wrong. It lives in the anti-corruption activist, the human rights defenders, the journalists, the peace protestors on the front lines of this struggle in Belarus, Burma, Syria, Cuba, Venezuela, and everywhere in between.”

In a full cataloguing of the world’s worst problems but also its strongest assets, Biden said: “We all must advocate for women — the rights of women and girls to use their full talents to contribute economically, politically, and socially and pursue their dreams free of violence and intimidation — from Central America to the Middle East, to Africa, to Afghanistan — wherever it appears in the world.” 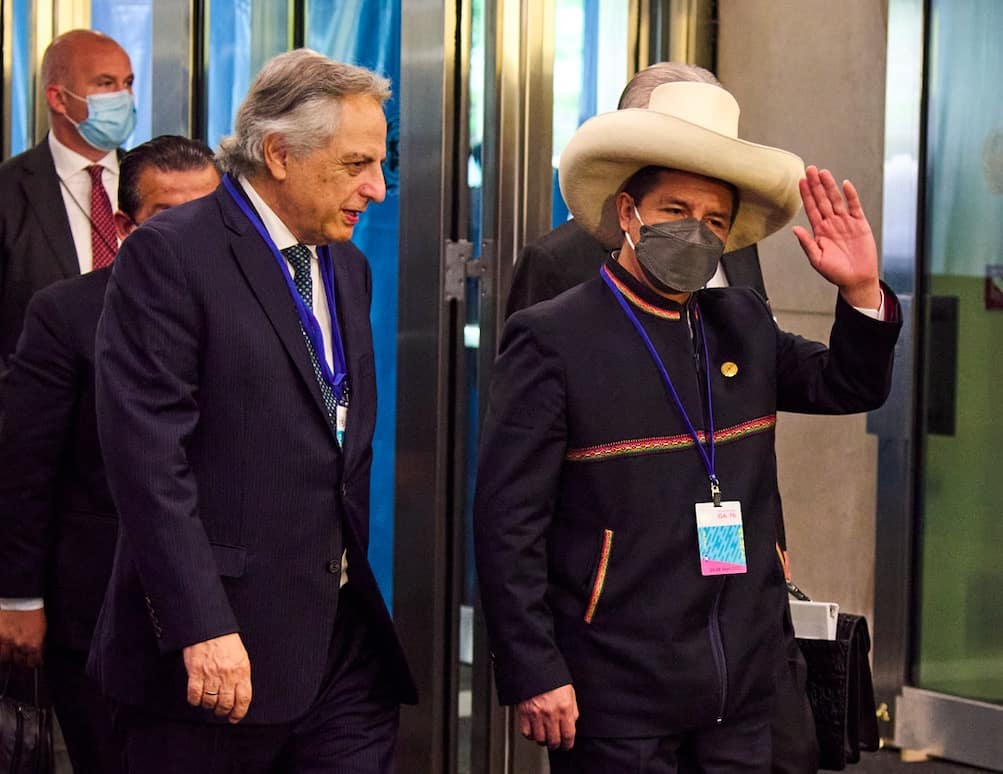 Pedro Castillo, in the hat, a politician who is a former teacher and union leader, was elected president of Peru in July. He was also scheduled to speak on Sept. 21. JOHN PENNEY

Slovakian President Zuzana Caputova was the sixth speaker and the first woman to deliver her nation’s perspective on the first day of global leaders’ speeches. Her remarks highlighted the intersections between the climate crisis, Covid and other challenges facing countries.

“Previously, the Earth was whispering, but now she is screaming that she cannot hold us anymore, that humankind is too heavy a burden to carry,” Caputova said. “We must decouple economic growth from the degradation we have been causing to the planet — and support those most affected, those forced out of their homes by floods or drought, or those losing jobs as we close down the most polluting factories.”

Slovakia is committing to reducing carbon emissions 55 percent by 2030, she said, and to completely phasing out the use of coal for electricity and heating by 2023. The country will spend “almost 6%” of its GDP on economic recovery, with one-third going toward a green transition. As the world’s largest producer of cars, per capita, Caputova said Slovakia would focus on producing green batteries to decarbonize transportation nationally and internationally.

Caputova noted the contrasting roles of science and politics in the road to Covid recovery. “Vaccines offer a clear path out of the pandemic,” she said, but nearly 75 percent of the doses have been administered in just 10 countries worldwide. Slovakia, she said, is committed to supporting the WHO-led Covax initiative to provide vaccines to poorer countries.

Caputova announced that she has launched a call to support Afghan girls and women with the prime ministers of Iceland, New Zealand and other women national leaders.

DEMOCRATIC REPUBLIC OF THE CONGO

President Félix-Antoine Tshisekedi was the first African to speak and is the current chair of the African Union. He talked extensively about the continent’s collaborative efforts to respond to the Covid pandemic, specifically elaborating on the African Vaccine Acquisition Trust, which was signed in March 2021 and has obtained 220 million vaccine doses so far. By January 2022, Tshisekedi said that more than 25 million doses would be available monthly throughout Africa. He highlighted five priorities for handling the pandemic in his AU role: increasing testing capacity in countries; ensuring enough medication; providing vaccines to countries that are unable to produce them themselves; encouraging medical research; and supporting systemic public health reforms and health care coverage.

“This year, two scenes made history,” Iranian President Ebrahim Raisi told the General Assembly by pre-recorded video. “One was on January the 6th, when the US congress was attacked by the people and, two, when the people of Afghanistan were dropped down from the US planes in August.”

Raisi repeatedly called for lifting of “illegal” US sanctions and emphasized how sanctions is hurting Iran’s ability to respond to the public health crisis. The country has responded to these restrictions, he said, by “sustainably” producing vaccines domestically.

“The Holy Quran introduces the destruction of nature and mankind as a major characteristic of the tyrants,” Raisi said, adding nothing else to the topic.

Multilateralism and the UN

Raisi spent much of his speech on “the US’ hegemonic system,” saying: “​​The military presence of the US in Syria and Iraq is the biggest hindrance to the establishment of democracy and will of nations. Freedom does not fit in the backpacks of soldiers coming from outside the region.”

Erdogan stressed that “whoever has done the most damage to nature” should lead the global efforts against climate change. Turkey was “among the first countries,” he said, to sign the Paris Agreement but that it has not yet implemented it. Turkey will announce the Paris Agreement to its Assembly next month, he said, and plans to ratify the “carbon neutral” pact before COP26 in Glasgow in November.