The Taliban are back in power in Afghanistan, and the hard-won gains women have made in the country are at risk. The situation is dire for all Afghans. The country is on the brink of starvation, and in recognition of this urgent need, more than $1 billion has been pledged to provide humanitarian assistance to the Afghan people. Putting Afghan women front and center in this process — as decision-makers, negotiators, project managers and direct recipients — will help ensure that the money gets to where it is needed most.

Evidence increasingly shows that women improve efficiency in the allocation of such resources. The World Bank has documented the important role women play in the Afghan economy, showing that economic growth is stronger and more sustainable when women and men alike fully participate in the labor market. And when women control more income, families benefit with more money spent on child nutrition, health and education.

The human rights of Afghan women and girls are not only a matter of principle, but they are also intrinsically strategic to the future of the country, which benefits all Afghans and will help promote political stability as well as economic development. Peace agreements that have women’s participation increases the probability of a pact lasting at least two years by 20 percent and the probability of one lasting 15 years by 35 percent. Again, the inclusion of women is not only the right thing to do, it’s the smart thing to do, as recognized recently even by The Economist.

We are part of the new Women’s Forum on Afghanistan, bringing together global women leaders and Afghan women leaders who are all committed to the protection and promotion of women’s rights in Afghanistan. Everyone in this circle agrees that humanitarian aid is an urgent priority, and that recognition of fundamental human rights is not incompatible with this priority but will rather advance its effective delivery. Everyone also agrees that what happens in Afghanistan will affect the rest of the world, that we are all in this together. We are calling for the establishment of a formal process to ensure consultation with Afghan women on decisions that are made regarding the disbursement of funding in Afghanistan and for priority to be given to Afghan women-led organizations in carrying out programs and aid delivery in the country.

The crisis in Afghanistan is the latest and perhaps most urgent opportunity for the United Nations to give meaning to Security Council Resolution 1325. This resolution recognized the critical role of women in promoting peace and security and called for the inclusion of women in decision-making to that end. It was adopted on Oct. 31, 2000, nearly a year before 9/11 and the subsequent war in Afghanistan. We have to move forward, not backward, if we want to live in a world where peace and security prevail — a world that benefits everyone, including the Taliban. The status of women in any and every country is closely linked to the security and success of that country. Afghanistan, sadly, has a terrible track record in this regard.

We can only hope that the recent anniversary of Security Council Resolution 1325 was more than a flurry of words. The UN has done well to put a woman at the helm of the UN mission in Afghanistan, Deborah Lyons, and UN agencies and governments should follow this lead and send delegations that include and are even led by women to Afghanistan.

Let’s take this opportunity to give women, and Afghan women in particular, a chance to participate meaningfully at all levels in decision-making over humanitarian aid distribution. In addition to highlighting the fundamental and universal principle that all human beings are born free and equal in dignity and rights, including women in such commitments will greatly enhance the potential for Afghanistan to survive and even thrive. 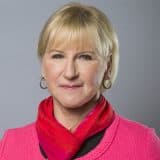 Margot Wallström, a former foreign minister of Sweden, is chair of the Women’s Forum for Afghanistan. 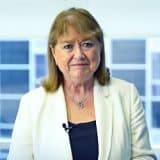