You are reading This Week @UN, summarizing the most pressing issues facing the organization. The information is gathered from UN press briefings, PassBlue reporting and other sources. This week, Mexico’s president proposes a plan to end worldwide poverty; tensions heat up on the Poland-Belarus border; America’s fight against global warming.

• Our latest news quiz tests readers on women, peace and security, or WPS, a phrase rooted in Security Council Resolution 1325, approved in 2000, to ensure the equal role of women in peacemaking. The WPS agenda has expanded since then with other binding Council resolutions, but confusion abounds on the topic; hence our quiz. It was produced by Anna Bianca Roach, our reporting fellow, with the International Civil Society Action Network, or Ican!

• Deborah Lyons, the head of the UN’s political mission in Afghanistan, Unama, traveled recently to Washington, D.C., to meet with officials of the World Bank, the International Monetary Fund and the State Department as well as Samantha Power, the head of Usaid, her spokesperson told PassBlue. Lyons, a Canadian, is scheduled to brief the Security Council on Nov. 17 on the status of Afghanistan, which is facing an economic free fall partly triggered by the Taliban takeover on Aug. 15 and the resulting freezing of its financial assets by the United States and stoppages of aid money from the World Bank and the IMF. Lyons has been raising the issue of money being injected into the Afghan economy in her Washington meetings and will reiterate the message to the Security Council. A Nov. 4 essay in PassBlue by two ex-UN officials and women’s-rights advocates, Margot Wallstrom and Susana Malcorra, makes a pitch for Afghan women’s direct role in deciding where new aid money will go in the country. Heather Barr of Human Rights Watch is tracking the conditions for women and girls in Afghanistan since the Taliban’s rule. — DULCIE LEIMBACH

• Fund-raising: Right now, if you give to PassBlue, your donation will be doubled, up to $1,000 for each gift. Your contributions enable PassBlue’s team of editors, reporters and social media and tech specialists to report on foreign affairs through the UN. That includes such important stories as a former UN official revealing how certain countries stopped the UN mission in Western Sahara from doing its job decades ago: holding a referendum; Mexican President President Andrés Manuel López Obrador’s proposal to end global poverty; and an investigation into the murky operations of the International Seabed Authority, a UN-mandated body that has the sole power to approve mining in the high seas. Our award-winning journalism is free to read, but we rely on your contributions to produce our stories every week, so please give so that we persist and persevere.

• As reported in a scoop by PassBlue in our Nov. 5 weekly summary, United States Ambassador to the UN Linda Thomas-Greenfield is traveling to Jerusalem, Ramallah (in the West Bank) and Amman, Jordan, from Nov. 14-19, the US mission to the UN announced on Nov. 11. Thomas-Greenfield will be the first Biden Cabinet official to visit Israel since its new government was formed in June. The US said the ambassador would meet with Prime Minister Naftali Bennett and others to discuss “continued U.S.-Israel cooperation at the UN” — specifically, “defending Israel from one-sided and biased resolutions that consume too much time up at the United Nations and in UN bodies”; in Ramallah, she is meeting with the Palestine Authority’s President Mahmoud Abbas and civil society members (though not the organizations that Israel recently labeled terrorist groups); and in Jordan, she will express her country’s “appreciation for Jordan’s generosity in hosting refugees from neighboring countries.” The ambassador’s visit coincides with the approval by Israel of plans to build 3,100 housing units in the West Bank, a move the US administration said it “strongly opposed.” — DULCIE LEIMBACH

In other US State Department announcements, Secretary of State Antony Blinken will visit Kenya, Nigeria and Senegal, from Nov. 15-20, to meet with Presidents Uhuru Kenyatta, Muhammadu Buhari and Macky Sall, respectively, “and address various crises in Africa, including in Ethiopia, Somalia, and Sudan.”

• The Obscure Organization Powering a Race to Mine the Bottom of the Seas: Anna Bianca Roach ends her two-part investigation into the International Seabed Authority, an autonomous body mandated by UN Convention on the Law of the Sea. The organization is accused by a range of critics as lacking transparency and accountability while it rushes to enable deep-sea mining.

• Spokesperson’s briefing: The World Food Program warned that the number of people facing famine in 43 countries has risen from 42 to 45 million since early this year. Most of the increase is due to an official reclassification that added three million people who are facing a hunger “emergency” in Afghanistan. Smaller increases in starvation have also occurred in Ethiopia, Haiti, Somalia, Angola, Kenya and Burundi.

• Mexico’s President Says the UN Should ‘Wake Up From Its Slumber’ to End Global Poverty: Maurizio Guerrero reports on Andrés Manuel López Obrador’s first visit as head of Mexico to the UN, presiding over a Security Council meeting. There, he proposed a global plan, led by fellow UN member states, to eliminate poverty.

• Spokesperson’s briefing: In Addis Ababa, Ethiopia, 16 UN staff have been detained in police facilities, while six other staff have been released. “We, of course, are actively working with the government to secure their immediate release,” Stéphane Dujarric said, adding, “We’ve not been able to get into Tigray the aid that we need, the fuel that we need, the cash that we need.” In response to a reporter asking which parties to the war are preventing the transportation, Dujarric said that “there are impediments across the spectrum.” [Update Nov. 12: After some of the 16 UN detainees were released, the number jailed by Ethiopian authorities is now 10; moreover, 70 subcontracted truck drivers to deliver aid into Tigray have been detained as the conflict is spreading. The Ethiopian government has still not explained why it expelled seven UN officials in October, some of whom have been replaced.]

• Who Is the World’s Greatest Climate Champion? Mark Hertsgaard, the environment correspondent for The Nation, is covering COP26. In his analysis, he poked at the US for boasting that it is “showing the world true climate leadership,” as Nancy Pelosi, the speaker of the US House of Representatives, said at the Glasgow, Scotland, conference. It has been extended another day, until Nov. 13, for final negotiations on draft texts.

• Spokesperson’s briefing: UN Secretary-General António Guterres reiterated about the crisis at the Belarus-Polish border that migration and refugee issues should be dealt with “according to humanitarian principles and international law,” and that the problems “should not be used for political purposes.” UN High Commissioner for Human Rights Michelle Bachelet said that she was “appalled” at the number of people — about 5,000 — who remain in “a desperate situation in near-freezing temperatures at the border.”

[Update, Nov. 11: The UN’s International Organization for Migration and the UN Refugee Agency in Belarus were granted access to a makeshift camp on the Belarusian side of the border near the international crossing point of Bruzgi, where approximately 2,000 asylum seekers, refugees and migrants have been staying since Nov. 8 in the European standoff. The UN Security Council met on the problem on Nov. 11, and Estonia, France, Ireland, Norway, Britain, the US and incoming member Albania released a statement saying they condemned the “orchestrated instrumentalisation of human beings whose lives and wellbeing have been put in danger for political purposes by Belarus, with the objective of destabilizing neighbouring countries and the European Union’s external border and diverting attention away from its own increasing human rights violations.” 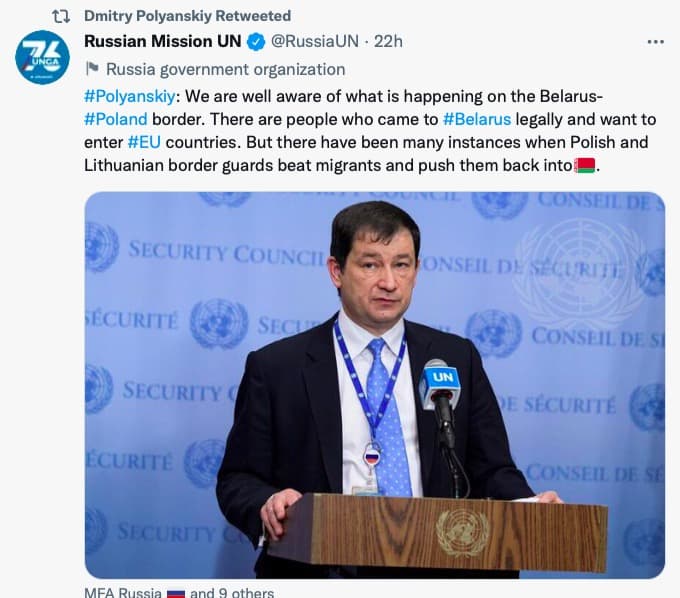 In further developments, on Nov. 12, a reporter asked UN deputy spokesperson Farhan Haq: “Do you think it’s necessary and appropriate for countries [such as Poland and Ukraine] to bring armies with heavy weapons to their borders to basically confront 5,000 migrants?” Haq answered: “What we want people to be looking at is not at the idea of people as some sort of abstract problem. They are people, hungry, cold people, and their basic rights and their basic dignity needs to be considered.”]

• How Data Poisoning Poses New Challenges for the UN’s Peace and Security Agenda, Eleonore Pauwels writes in her essay that when data is manipulated to deceive — posing a risk to critical infrastructure, like electoral systems — global security and national sovereignty are threatened throughout the world, so the UN Security Council needs to pay closer attention to “data poisoning.”

• Spokesperson’s briefing: Bachelet, the UN high commissioner for human rights, said that the “harsh sentencing” of the American journalist Danny Fenster by a military court in Myanmar is “emblematic of the wider plight of journalists who have been facing constant repression since the military takeover on 1 February.” She said that at least 126 people in the media industry have been detained in the country, 47 of whom are still in custody.

• Unaisi Lutu Vuniwaqa of Fiji is named assistant secretary-general for safety and security; she succeeds Nóirín O’Sullivan of Ireland.

• The US Senate Foreign Relations Committee Chairman Bob Menendez (D-NJ) and seven of his Senate colleagues want to know more about President Biden’s Summit for Democracy (Dec. 9-10), so they wrote a letter to Biden asking for clarity on the criteria that is being used “to determine which countries were invited to participate in the Summit, what role civil society will play in planning and execution, and what specific commitments the Administration will put forth during the gathering.”

• US Senator Menendez and others in Congress released a statement on Nov. 12 condemning recent actions by the Houthi rebels in Yemen, saying: “We are deeply concerned by reports that the Houthis have breached our embassy compound in Sana’a and detained and harassed a number of U.S. locally employed staff and former staff employed by the United Nations. Such acts violate international law and basic principles of human rights, and must not be tolerated.”

This summary has been updated to include new information on the Afghanistan news item at the top.