Nine months ago, Myanmar witnessed the demise of what was still the beginning of a slow transition to a democracy. In the early morning hours of Feb. 1, Senior Gen. Min Aung Hlaing and his fellow generals seized power in a well-orchestrated coup d’état. Soon after, the junta began rolling out a campaign of repression and violence. If history is any indicator of what to expect, the worst is yet to come.

While we prepare for this dangerous, uncertain future, diplomats at the United Nations are weighing a decision with massive implications for international action against the coup. The junta is demanding recognition as Myanmar’s official representative, despite its illegitimacy and crimes against its own people. The United States and China reportedly reached a deal that silenced Myanmar’s current representative, Kyaw Moe Tun, during September’s high-level addresses to the UN General Assembly. Yet the question of military recognition appears far from settled. The UN body tasked with decisions on official representation, the Credentials Committee, is set to meet on Dec. 1. The committee consists of the US, China and Russia as well as six other countries.

Here’s what we know: The people of Myanmar are tired of diplomatic compromises. They are urgently demanding that the UN reject the military junta in all forms. This is a regime that stole the November 2020 general election in which the National League for Democracy won a resounding landslide. Its bloody, illegal rule must not be rewarded by leading human-rights bodies like the UN.

For more than seven decades, the Myanmar military has waged a civil war in several ethnic states of the country, with human-rights violations affecting ethnic people across the country. This includes widespread, systematic sexual violence against ethnic women, which amounts to crimes against humanity under international human rights law. In the case of the Rohingya, it is evidence of genocide.

The military uses rape and sexual violence as a weapon of war to demoralize and destroy ethnic communities. These crimes are more than random, isolated acts by rogue soldiers, and their widespread, systematic nature indicates a structural pattern. Impunity for these crimes is systemically entrenched, forcing ethnic women to live with their trauma and carry on without adequate justice, accountability, counseling or resources. As a result of the campaigns against ethnic groups, the number of internally displaced persons and refugees is continuously rising near the borders of Thailand, China and Bangladesh.

Since the February coup, more than 1,158 innocent civilians — including at least 82 women — have been killed. To further crush the resistance, the junta has started expanding military operations into ethnic areas, where conflict has raged for decades. The renewed fighting has caused a true humanitarian disaster. In Karenni State, the military opened fire on an aid vehicle carrying food and medicine for displaced people. Facing food and medicine shortages, internally displaced people in Karenni and Chin States have sought aid from volunteers. In one instance, the junta intercepted and arrested a volunteer before destroying a shipment of food and medicine. Faced with no other options, people are flocking to refugee camps, where diarrhea and malaria are rampant.

It is estimated that at least three million people in Myanmar need crucial support, including shelter, food, health care and protection from violence. Without an adequate response that holds the junta accountable for blocking aid routes and destroying donated materials, the livelihoods of the most vulnerable people will worsen.

There are terrifying reports of women being arrested by the military and subjected to harrowing sexual assault, torture and other physical and verbal abuse. Security forces have also coerced women into sex in exchange for removing their names from warrant lists. Many women who are actively resisting the military have been killed as punishment for their work. Women and young people have also committed suicide to avoid arrest due to the likelihood of being tortured during their interrogation.

If direct military abuse weren’t enough, a third wave of Covid-19 began ravaging the country soon after the coup. When the military seized power, they also seized Covid vaccines. Evidence continues to mount that the military is weaponizing the pandemic to further the goal of eliminating peaceful protectors. The junta recently blocked an international plan to administer vaccines to civilians through civil society and ethnic health organizations.

In the months after the coup, the UN condemned the use of lethal force by the junta. It has also echoed support for an immediate end of weapons sales to Myanmar and called for a process of reconciliation. But these efforts are not enough to ensure that the junta ends its war on its own people and is held accountable.

Should the UN Credentials Committee officially recognize the junta, however, it would risk irreversible damage to the concerted cause of peace and justice by people in Myanmar. More important, it would destroy the UN’s moral conscience in the eyes of the people. Worse, it would signal to the junta that it is untouchable. The committee must do the right thing or risk further eroding the human-rights situation on the ground. 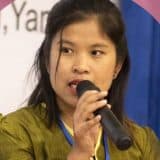 Nang Moet Moet is a feminist activist from Shan State, Myanmar, and is of Pa-O ethnicity. Before she was elected to her current position as joint general secretary of the Women’s League of Burma, she worked as an executive director at PWU for three years.